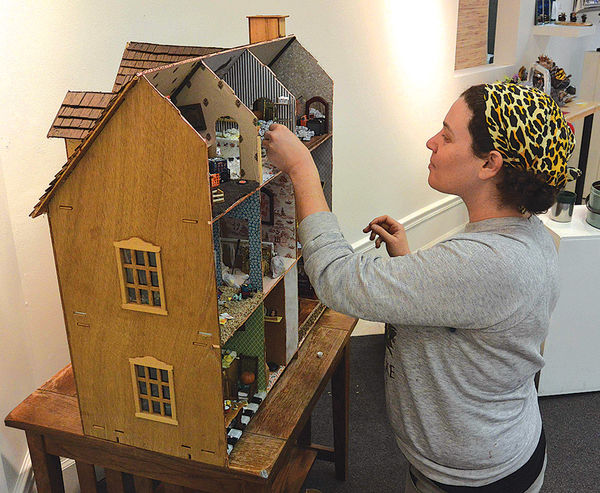 I’ve been working on my hoarder dollhouse since early 2012; this group show at the Grosse Pointe Art Center was the first time I’ve shown it publicly. That it felt like a vulnerable moment is probably a surprise to no one but me.

Here’s a little from the write up that K. Michelle Moran wrote about the show:

Sharp has a couple of tapestries in the show that explore issues like residential development encroaching on nature, but her centerpiece is “The Hoarder Dollhouse,” a three-story dollhouse that the artist has been working on since 2011 and has never shown publicly. The rooms are filled with everything from scraps of tissue and little trash bags to tiny bundles of newspapers created for the house by Sharp. The piece shows the progressive nature of hoarding, as some rooms are more cluttered than others.

“A lot of the art I do is about accumulation,” Sharp said.

She said the dollhouse “has kind of built up over time” because “it doesn’t look right” when she just tries to pile on items all at once. She said hoarding is very much an American mental illness, driven in no small part by constant exposure to advertising that urges people to buy more and more things.

“It’s very encouraged for us to use stuff as a placeholder for memories, for emotions. … There’s a kind of human tragedy being buried in all that stuff,” Sharp said.

Being a hoarder is “not something anyone sets out to be,” she said.

“It’s made more poignant by the fact that it’s misunderstood,” Sharp said.

Once the show comes down, I imagine I’m going to go right back to hoarding the house. That’s what hoarders do, after all. Even small ones.