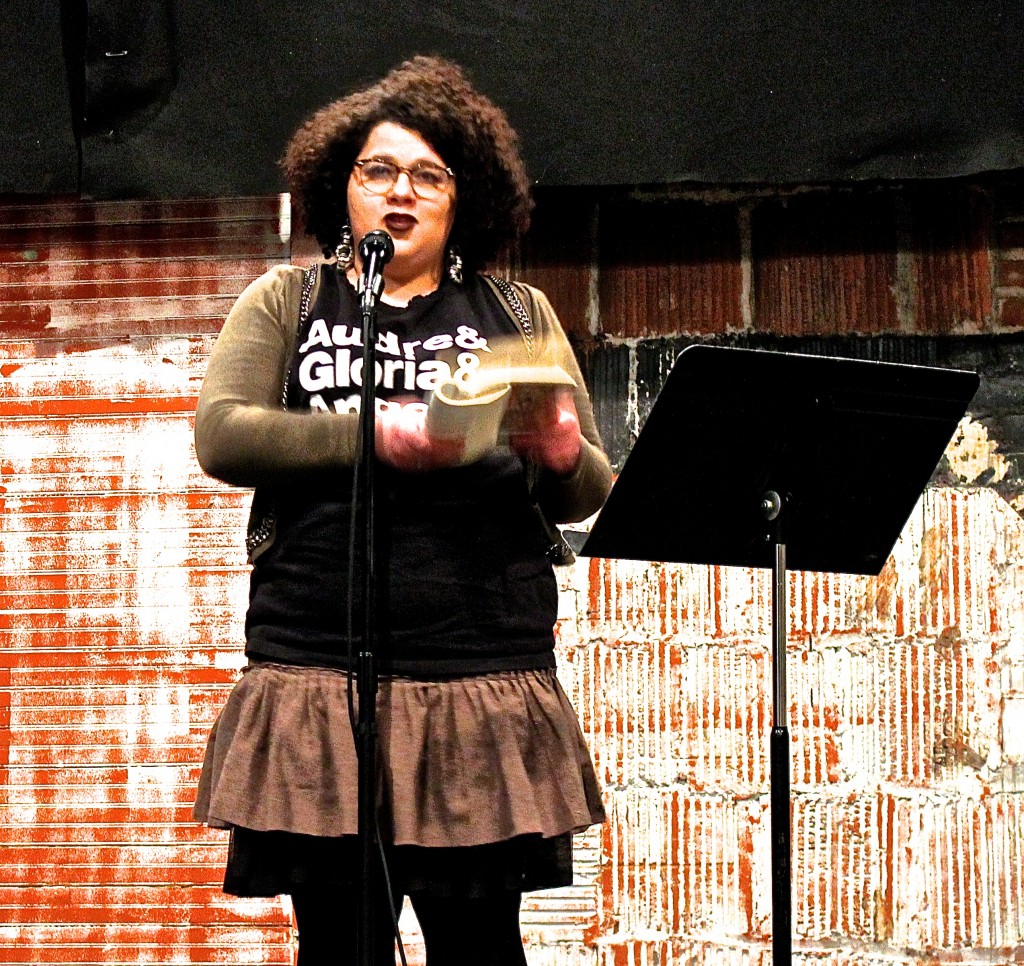 Location: Brooklyn St. Local (Casey: “Every time I try to convince people Detroit isn’t becoming Brooklyn, it goes and does something like this.”

CR – Eggs over easy, rye toast, salad (they were out of roasted potatoes), bacon, coffee (black)

SRS – Ham & cheddar omelet, fries (they were out of roasted potatoes), coffee (black)

Because apparently this blog is my venue for airing the most unflattering aspects of my nature, I’m going to lead by admitting to a touch of bitterness when I first heard about the Write-A-House program. Oh, are we trying to foster a writing community here in Detroit? And we’re doing that by importing some new ones to struggle along with the rest of us (who, BTW DO EXIST HERE thx)?

But that was before I knew we were getting Casey.

We crossed paths officially at this reading to benefit the Radical Librarianship arm of the Allied Media Conference, and I managed to pull my head out of my ass and invite Casey to coffee, and the rest is history-in-the-making. She is a brilliant and complicated person (see: writer). As is often the case when I talk with Casey, we covered a lot of ground. I was dismayed to hear that one of my favorite comedians, Amy Schumer, was bungling what should be a kind of simple apology for past racist material. Casey and I discussed this phenomenon wherein people who have done inexcusable things (like politicians who push through anti-gay legislation in the name of the family, only to have their extramarital gay affairs revealed) have no problem getting up and saying sorry–when it’s like, actually you’re going to need to do a LOT more to be an okay person or good at your job. But then when it comes to a kind of garden-variety, basic social transgression, where more or less saying, “I fucked up. To err is human. I regret my misstep and will make a definite effort not use my public spotlight to say shitty things about Mexicans ever, ever again”–those people somehow can’t get it together. I feel compelled in this context to restate one of the greatest lessons I’ve learned so far in life: our character is not defined by the fact that we make mistakes, but the way we handle them.

Casey was also a receptive conversation partner for me to vent a little fury about the latest fuck-up on the part of the City of Detroit, regarding a foreclosure notice on a property that I have been fighting to purchase for the community garden for the last three years. After finally succeeding no more than six months ago, I get a bill in the mail this week claiming we are three years behind in our property taxes and risking foreclosure. Where the actual fuck does this city system get off? I am going to deal with it, calmly and with great deference, like I have dealt with all the nonstop asshattery and class discrimination that tinges every attempt made by average Detroiters to own a piece of the city that the Powers That Be are determined to sell exclusively to rich white people. But first I am going to blow off some goddamn justifiable rage at this broken-ass system that is right on course to repeat all the mistakes of the past. Thanks for hearing me out, Casey.

What else? So much else. We talked about wacky spectacles, and how they might not be doing for you the thing you think they are doing for you. We talked about the inescapable sadness of a person with an unappealing laugh (no one will ever take joy in your joy, friend, sorry). After breakfast we went, as is local tradition, to the final moments of the DIA’s special exhibit, Diego + Frida in Detroit. I am not trying to be part of Fridamania, but I will just say for the record, she painted circles around that man.

‘Til next time, Casey Rocheteau.