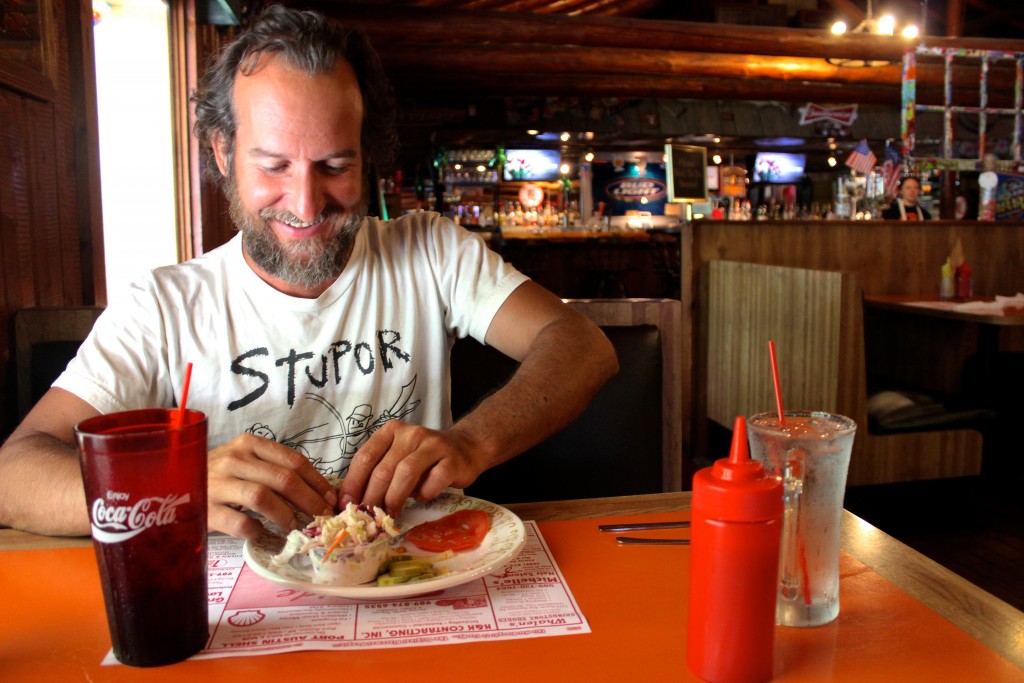 SH – Cheeseburger on a pretzel roll, side of coleslaw, Coke

SRS – Cheeseburger on a pretzel roll, side of fries, Diet Coke

It’s funny how you can hear something and in your mind you accept it, but when you see it realized, it strikes you how mentally unprepared you were to deal with it. A couple months ago, at a talk he delivered at the Delray Community Center, Scott Hocking mentioned that his next project was to reconstruct a barn in the tip-of-the-thumb town of Port Austin, into a boat. Okay.

I should mention that I come from an improvisational theater background. One of the basic tenets of improv is that you need to accept the premise. If your scene partner says, “We’re in a car!!” you do not say, “No, we aren’t!” – that equals a scene-ending stalemate. You say, “Right on! We’re going to Marine World!” I tend to apply the skill of accepting the premise pretty universally in my life. There is no need to shut people down, just because I don’t understand where they’re going. A little “Yes, and…!” will take you far in life.

So when Scott said, “I’m going to turn a barn into a boat,” I said, “Yes! And I’m going to come see it, if you don’t mind?” And, probably as a result of working 12-hour days alone in the sun, he was very happy to oblige me. There are a number of ways to get to Port Austin, but the straightest shot is to literally drive 120 miles straight north on Van Dyke Avenue, which has its southern terminus in my very neighborhood. The scenery ranges from fairly intact Detroit, to mega blown-out Detroit, to Warren, MI, which, for my money, is the worst of all the near suburbs, out to Romeo, where the mood shifts to agrarian/tourism. U-Pick cherries and antique shops. People selling deer stands by the side of the road. I love cities, but I also love small towns (and I love Detroit, as a kind of small-town city). Honestly, all of it is my kind of scene; I contain multitudes.

Anyway, I thought I had accepted Scott’s basic premise, but when I finally pulled up to his worksite, I realized I had totally overestimated my brain’s ability to deal with it. Because, you can say something like, “a boat made out of a barn” but actually, the mind has no template for that, because it’s not really a thing. It’s a made-up thing. So then, whatever sort of vague expectation you manage to form around this idea gets pretty seriously disrupted by even a slight variance. It would be like hearing, “Here is a creature, half-horse and half-man,” and expecting to see a centaur, but instead seeing some poor dude with hooves for hands and feet. It would fuck you up. Scott’s work-which is still in foundational form, but his direction at this point is evident-is astonishing. It fucked me up completely. I’m not going to say too much more than that about it, for now.

Well, he took a break, and we went to the local watering hole for Daily Special cheeseburgers and a lively conversation. Scott is, of course, a Kresge alum, so we processed a little bit on the subject of the Creative Capital weekend that I just went through, as part of that program (another blog entry in and of itself). We talked about his work, and though it seemed Biblical on the surface, it might be more of an exploration of gender-you know, penis structures versus vagina structures. Which is totally true, when I think about it. Scott keeps an eye on his own themes, which is smart and also hard work as an artist. We talked about hoarders, because I always want to talk about hoarders. Neither of us has ever read the Bible.

I’m hoping to write something more coherent about Scott’s barn project, and the whole Port Austin barn movement in the making, up there. For now, I have to run, so I’m afraid you’re just going to have to accept that premise and wait to see if it fucks you up.