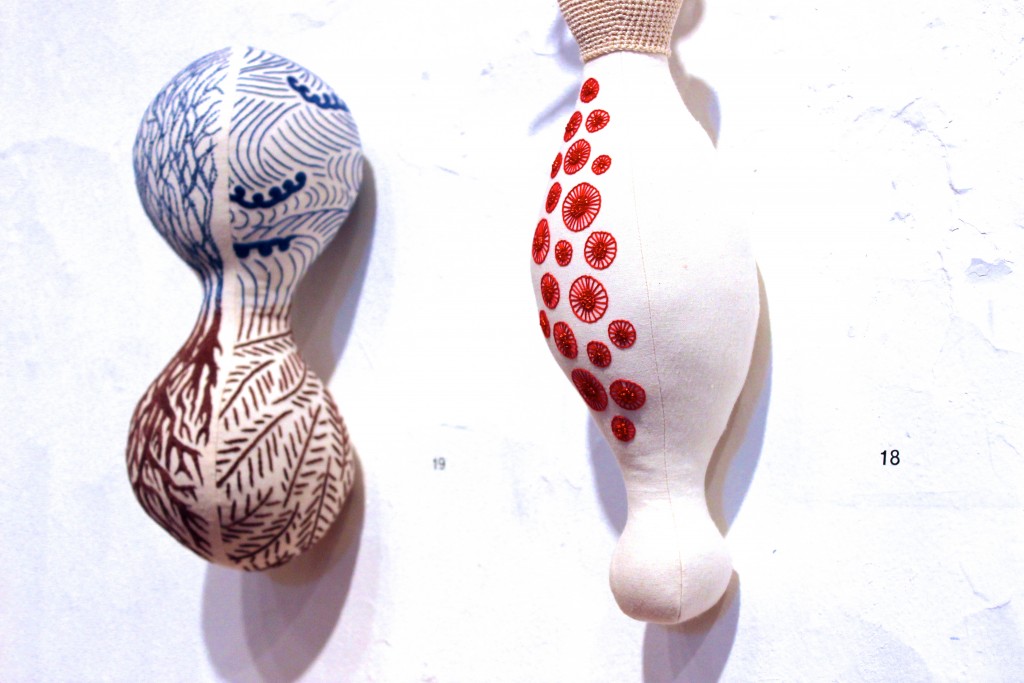 I met Kirsten Lund the way all introverts meet other introverts—via an extrovert. In this case, Heather Accurso, who is often to be found with Lund at various cultural events around Detroit Metro. Both artists participated in the recent show at the Scarab Club, and both are based in Ann Arbor, which is where I met them, at an artist talk at the Ann Arbor Art Center. Though Heather was the one who approached me initially—and indeed, took home a score of prizes in the Scarab Club show from juror Andrew Kreiger for her excellent series of sci-fi scenes featuring brightly-colored children—it was Kirsten that I sought out for a follow-up breakfast because, let’s face it, I’m an absolute sucker for fiber arts, and she is, in the words of artist Michael McGillis, “an embroidery queen.”

Over breakfast, I learned a little more about Kirsten; in addition to the intricately stitched sculptural pieces that resemble alien seed pods or prehistoric megaflora, she also quilts and does intensive embroidery—all of which is a kind of abstraction from her true original process of drawing. We have a lot of overlap, in terms of the constant struggle of the creative generalist (I am sensing this trend with so-called fiber artists. What is our deal? Do we have commitment issues?) Maybe this is because fabric and other fibers, like paper, are such soft media, able to incorporate infinite additions, alterations, augmentations. We do not have commitment issues; we are just open to possibilities (I tell myself and my boyfriend).

Over the course of breakfast, Kirsten made a meticulous organization of her plate… …which is another habit I recognize. One of my sometimes (not for a while) web comic, Small Victories. I never said it was funny.

The spirit to intervene with aesthetics at every level. It’s no wonder we go crazy—the greater wonder is that any of us don’t. But Kirsten seems anything but crazy; very calm, very deliberate, and clearly a person who considers things pretty deeply.

She turned me onto this show, which is opening in August: So maybe a road trip to check that out, sometime in the future. I’m very excited for the show at CAVE opening this Saturday – that will also feature some of my favorite fiber artists, who just can’t seem to restrict themselves to fiber: Corrie Baldauf, Carrie Dickason, Megan Heeres. And earlier this week I got to sit down with Nick Cave–another fiber artist who has yet to meet the media he can’t incorporate into one of his fabulous Soundsuits (my interview with him should go live at Hyperallergic tomorrow). Fiber is in the air! Cover your mouth–that cannot be good for your lungs. But great for eyes, spirit, and other sensory organs.