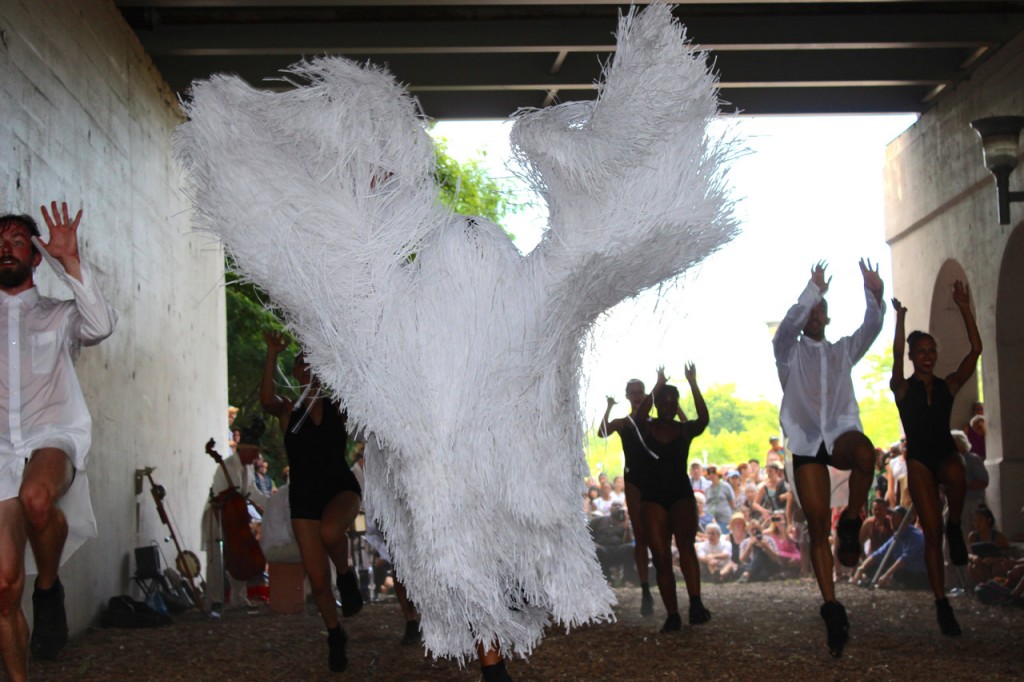 DETROIT — In 1989, while a postgraduate at Cranbrook Academy of Art, Nick Cave developed the first of his Soundsuits, for which he has become world-famous — sculptural bodysuits constructed from a range of found objects, which transform the wearer into a figure both highly visible and completely obscured. The Soundsuit was a means for Cave to process the intense vulnerability he felt as a black man during the Rodney King beating, which took place the same year he graduated with his MFA from Cranbrook, which boasts a lavish and sequestered campus in the affluent and mostly white Detroit suburb of Bloomfield Hills.

More than 25 years later, Laura Mott, curator of Contemporary Art and Design for the Cranbrook Art Museum, has collaborated with Cave to stage a monumental homecoming — a series of performances, installations, happenings, and publications collectively titled, Here Hear. In April, Cave began a series of Soundsuit photo shoots throughout Detroit, which are now in the form of an activity book at his astounding show which opened in June — Cave’s first solo show in Michigan. Here Hear features more than 30 of his Soundsuits, newly commissioned works, and selections from his last show at Jack Shainman Gallery in New York (Made by Whites for Whites). The show’s opening weekend was paired with a set of events in Detroit’s Brightmoor neighborhood — a long-forsaken region of the city, currently enjoying a fine art spotlight on the work that neighbors and community activists have been doing for decades to stabilize the area. Now, as July moves into August, a series of Dance Labs, facilitated by Cave, but developed and executed by creative communities within Detroit, are having their public debut.

The first took place on Sunday, July 18 at the Ruth Ellis Center, a facility dedicated exclusively to the support of LBGTQ runaway youth — the only of its kind in the city. A packed warehouse of people turned out to see the kids from Ruth Ellis dressed in costumes that Cave had dispatched in a box only a week earlier. Modern dancer and choreographer Biba Bell likewise only had a box of costumes and a week to work with another set of dancers to develop a performance for a crowd estimated between 800 and 1,000, at the Dequindre Cut — a biking/walking path installed along a former train track connecting the Detroit River Walk to the popular Easter Market district. The last of these Dance Labs will take place on Friday, July 31, at Campus Martius, dead center of the downtown business district. A final outdoor performance, “HeardDetroit,” will be held in late September, followed by the project’s culminating event, “Figure This: Detroit,” a recapping of all the performances at Detroit’s historic Masonic Temple. All these events are free and open to the public.

I was fortunate enough to get a moment with Cave, following a rehearsal out at Cranbrook, and we talked through some of the ins and outs of this ambitious year of events, the buzz about Detroit, and the fuel for his creative fire.