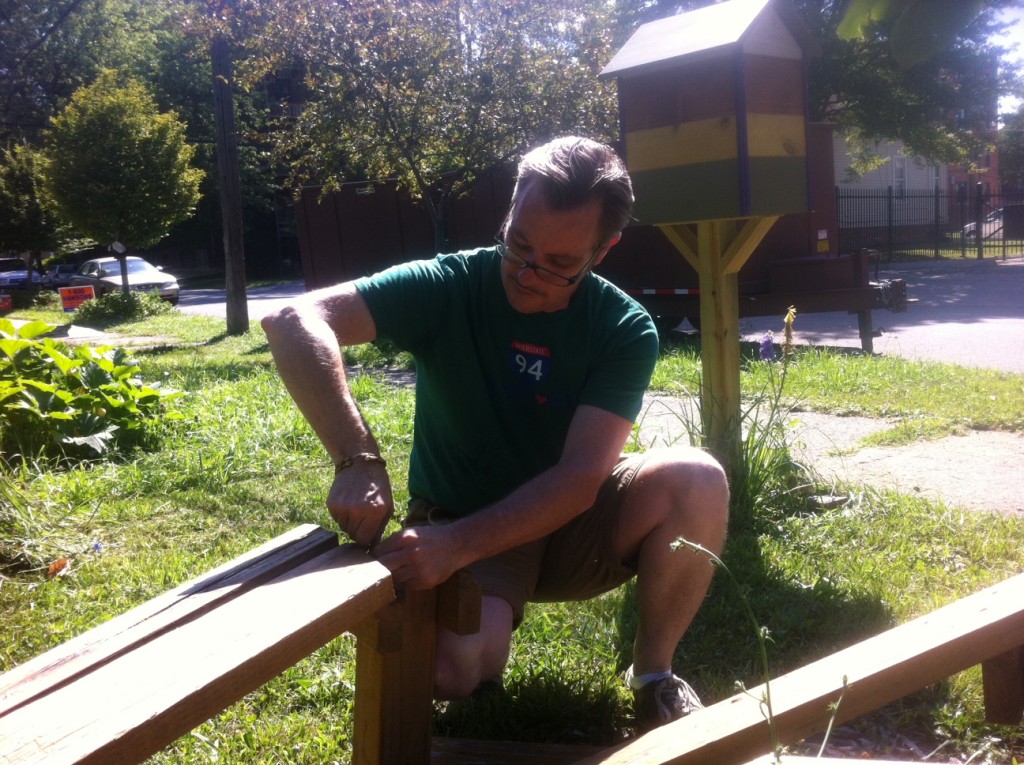 BK3 – Water, from a canteen

I met Bayard for “breakfast” in the same place that I met him for the first time: at our neighborhood community garden, where we both play key roles in operations, such as they are. Breakfast, in this case, was actually a round of dueling mowers, as we prepared our humble garden for an appearance on the Keep Growing Detroit seasonal bike tour of community gardens. However, once we got a solid mow in, we got to talk a little bit, as we (Bayard) reassembled a broken bench.

Bayard is a classic everyman, native son of Beaver Island. Based on Bayard as my only example of Beaver Islanders, I imagine them all to be slightly offbeat, incredibly versatile and handy, and deeply, deeply free-associative in their thinking. Whether that is true or not, I like to think so. Conversations with Bayard are an absolute exercise in my favorite activity: accepting the premise. Given free reign, he will free associate through an entire conversation, and it is glorious.

He’s also a screenprinter! Bayard is one of the cofounding members of Ocelot Print Shop, over in the Cass Corridor. This is his second printshop enterprise, having spent much of his career in his generational family business of industrial screenprinting. Ocelot handles more artistic and fun type stuff, and is a great outlet for Bayard’s limited print run comic sketchbooks, hilarious t-shirts “Squeegee Does It!”) and infinite patience in putting novice screenprinters through their paces. I have personally had the benefit of many a gentle correction or suggestion from Bayard, and my screenprinting skills are stronger for it.

Of course, that’s not all – Bayard also is a music lover, and maintains an ephemeral relationship with music–following the Dead for years, reluctantly but doggedly organizing the Beaver Island Music Festival, and providing his patented funny and really oddball lyrics to a couple of local performers, including Man Francisco. It is always worth a trip down to the Cadieux Cafe to see Bayard holding court while one of his musical collaborators performers — I try to get there every time.

Ocelot is always up to fun and hijinks during Dally in the Alley and Noel Night – don’t miss an opportunity to meet a real Michigan original and powerhouse of DIY spirit: BK3. Inimitable.