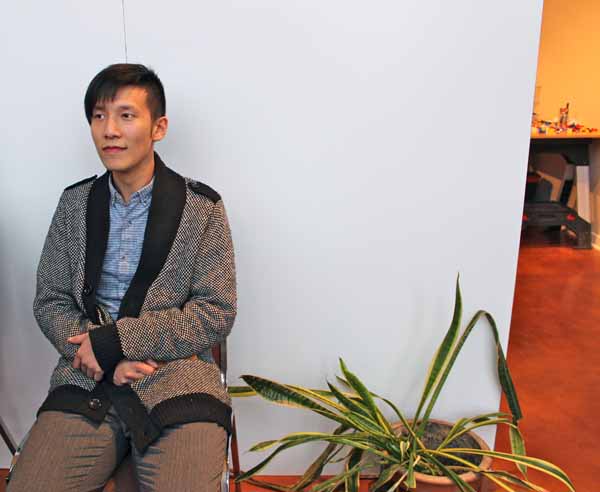 CT – Iced coffee with a shot of espresso (almond milk)

You ever meet up with someone and realize that you are on the non-romantic, art-based version of a shy first date? Yes, I’ve seen you at parties and openings, but no, we’ve never formally connected and now we are going full-fledged coffee, eeek what will happen? Well, it was one of those art-dates that took on a life of its own. I’m always so glad to meet someone who I connect with, and then sad in this case, because he’s basically relocated to Los Angeles now, so our conversation will have to be long-distance, for the most part. C’est la vie.

We had a lot of ground to cover, because I’m trying to wrap my head around Cedric’s recent curatorial efforts at Simone DeSousa Gallery – an international visitation by a group of Glasgow-based artists, titled “Over Over Over.” These five artists have connected with Detroit counterparts, with Cedric playing international matchmaker, and brought work here to show that is not necessarily in direct conversation with the city, but one gets the sense there is much yet to be said between these two places. Just like me and Cedric, there are some fast, immediate connections, and also some deeper concepts that are going to necessarily play out across long distance.

But we kept getting sidetracked, a lot. Cedric has gleaned a lot of learning from this curatorial effort, and I think it was honest of him to acknowledge ways the show was great, but also ways it could have been better. It made me feel like I was getting a peek at someone on the road to being really astoundingly good at something–which, for a process freak like me, is like a behind-the-scenes tour of an ice cream factory (I also like ice cream). Cedric made this statement about, “curating being an ongoing process,” which hit me like a ton of bricks. Like, his intention is to continue to curate the show, even after it is over. Partially because he’s hoping to really forge a connection between Detroit and Glasgow, and see it thrive on its own, but also, I think, because he is still passionately interested in the artists and the subjects covered in the show, and wants to continue to see them develop. This seems to me to be a great pay-forward from the investment Simone DeSousa made by handing curation of the show over to him in the first place. An inspiring level of interest in seeing artists develop on their own terms, being a facilitator. I think Cedric, in talking about curators he admires here in Detroit, it drawing from some of the best possible role models.

Honestly, a lot of our conversation is a blur, and some of it, I haven’t processed yet. That’s another thing we discussed–the time-lag between experiencing something, and being able to reflect on it through art. Cedric is currently putting a number of constraints on his own process, some of which may be driving him a little crazy. He also is at the end of a long moving process, relocating completely, while also coordinating this show in which he had to act as an installation proxy for the three artists who couldn’t be there in person. So it’s no surprise to me that there might be some kinks in his creative flow, although the fact that it comes as a bit of a surprise to him tells me that Cedric is accustomed to making work, no matter what. That’s a good, tenacious quality in an artist. But as a driven perfectionist who sometimes comes pretty close to pushing myself over the edge, I’d like to take this opportunity to remind everyone to be a little kind to yourself, if you can. Your brain is working on it. You will get there.

Enough for now, but more to come. I know, from what I’ve seen (including a stack of postcards at his last solo show at Simone’s that was labeled, “A Conveniently Placed Stack of Postcards,”) that Cedric might be game for a postcard exchange–that is my very favorite kind of long-distance friend. Here’s hoping!