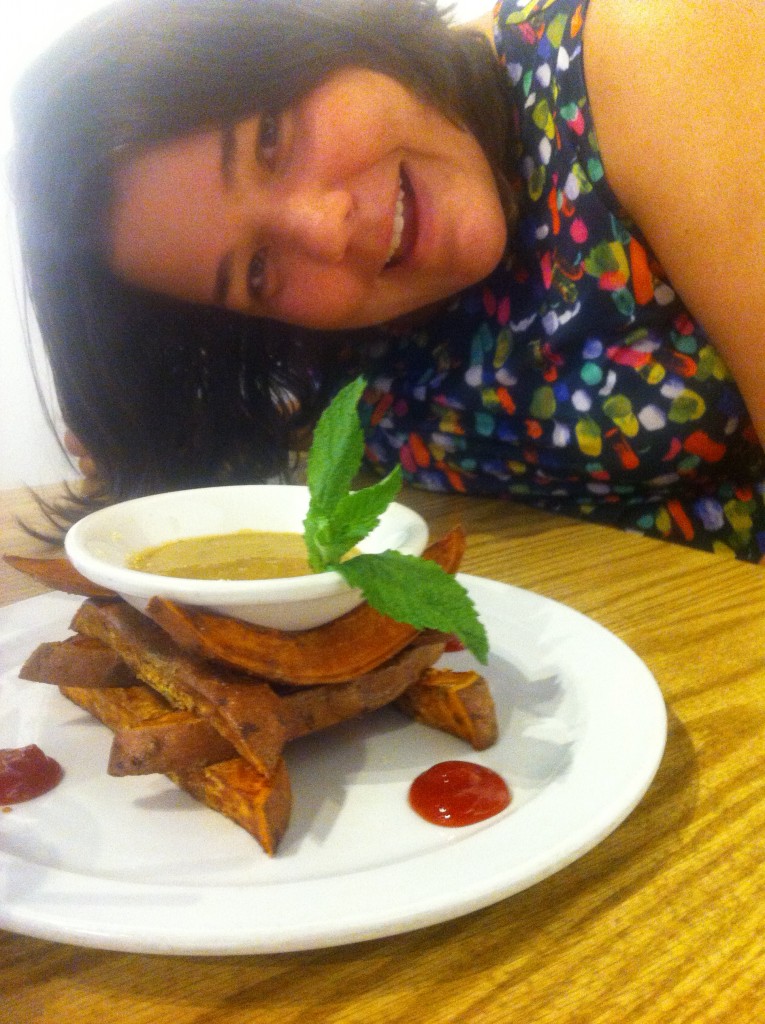 Jessica and I have a LOT in common. We both have the middle name Rose. We both wanted to be the same things when we grew up in the same order, as kids: ballerina –> marine biologist –> writer –> dawning awareness that we are probably an artist. We both really liked Jen David’s shirt, which featured a photo-realistic image of SPACE! But we both have misgivings about traveling into space, if we could never come back again. Jessica seemed most focused on the fact that you cannot get out of a spaceship, so it would be like being trapped in a big car. For my part, when I think about my occasional feelings of homesickness for, say, my native land of California, and then try to extrapolate the feeling of being homesick for a whole planet…it feels pretty overwhelming.

We analyzed the current show up at Cass–always a great location to encounter an artist from seemingly out of nowhere. The show, which opened on August 8 and will run through October 31, is called “Art Mavericks” and the mavericks in question are Tim Burke–who makes giant totems that look like a cross between cats and giraffes, among other things–and Joel Mockovciak–whose cabinets of curiosity merit another visit from me–and Miriam Marcus–whose understated domestic oil paintings of familiar rural/urban Detroit landscapes provide a nice grounding point for the other, more cartoony work. It’s a good show; I hope you check it out! I think the Cass Cafe really manages to do art in a restaurant setting in a way that totally elevates both experiences, without being over-pretentious. I love going there, and I hope it never changes.

Jessica and I did some talking about creative process, as she is lined up to teach a class on it for the first time at U of M this Fall. I have a habit of creating imaginary syllabi in my mind, for classes that I have not been hired to teach, so I always have an abundance of ideas in cold storage, if anyone ever needs them. Just let me know. In Jessica’s case, her class combines first-year art, engineering, music, and architecture students–kind of a motley crew with whom to cover creative process. But I actually think it’s a really exciting opportunity to facilitate a kind of open exchange about what creative process is–how it is similar and different between disciplines. Because I think something that is not well understood about art, outside of those who practice it, is that it is actually a form of problem solving, just like design. Levering aesthetics and construction to solve a problem…but it might be more amorphous than the problems that engineers solve for. Or not. I’m looking forward to hearing how the semester shakes out for Creative Process 101!

We talked some more about hoarding–this comes up a lot around me. I think stuff is so fundamental to who we are, maybe as humans, but certainly as modern-day Americans. It surrounds and drives so much of what we do. It’s really no wonder that some people become disordered around it. I’m in a sort of anxious state because I did some renovation work on my kitchen this month, which forced the contents of it into the dining room, which now is a rough approximation of what my life will look like, if I don’t keep an eye on my follow-through. I’m working back from it more slowly than I would like, and it has underscored for me how fragile my ostensible control is over my objects. Like a garden, if you let it go untended, it can get out of control surprisingly quickly. I am pretty sensitive about how to handle people’s relationships with stuff–way better than how to handle people’s relationships with people, actually–and I think I would actually do a pretty good job working professionally with hoarders. Assuming I don’t become one (or maybe because I’m always working actively not to become one). The key, I think, is recognizing that it’s not really the stuff that people are having trouble dealing with; it’s the emotions or memories that have become attached to the stuff. Helping someone with their stuff is really about letting them express the emotions and memories, and working to detach them from the stuff. Then it becomes much easier to see it just as the object, and subsequently let it go.

Anyway, I could go on all day, but I won’t. Jessica put a question to me, that will perhaps arise at the artist talk at Cave this Sunday, and I, in turn, will put it to you: What is the role or importance of Play in art process?

I’d love to hear your thoughts.