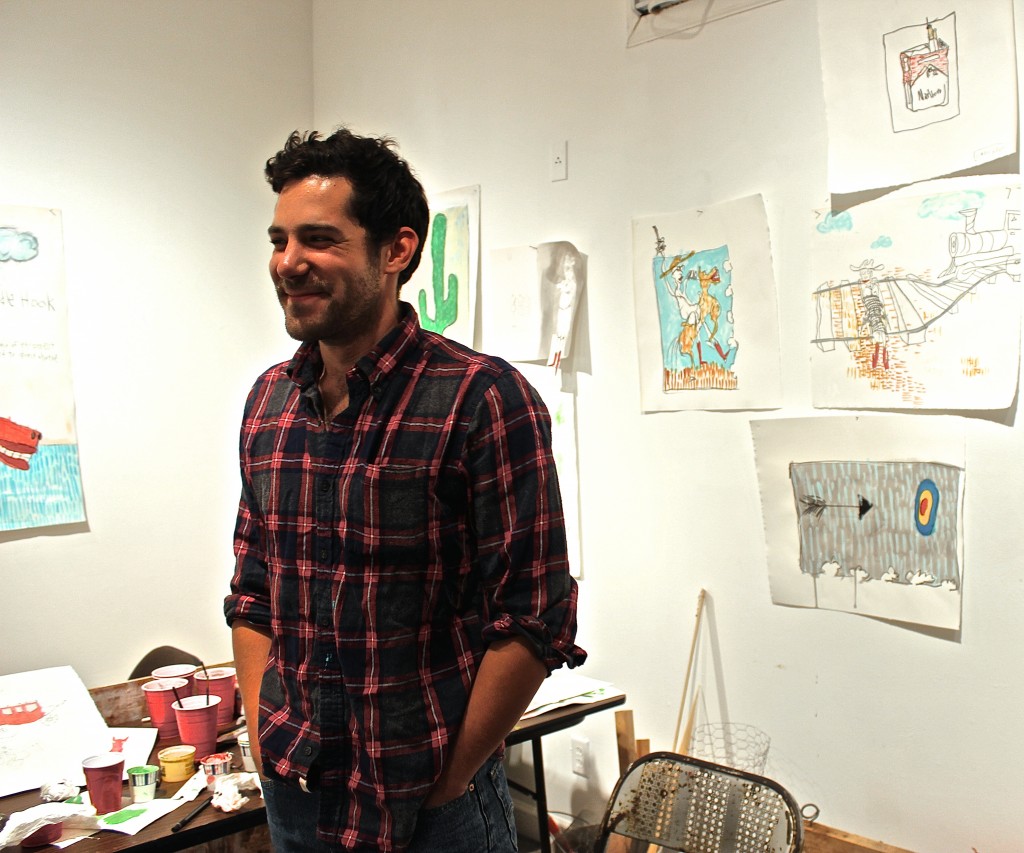 Alex did not have half a can of Stroh’s for breakfast, okay? This BWTA took place around 11:00 at night. But listen, I cannot deprive you of this gem of a conversation, just because it fails to conform to societal standards of what “breakfast” is. Sometimes rules are made to be broken.

Anyway, I dropped in on Alex at Public Pool, which he has been using as a studio space during a dormant summertime program for the gallery. He jumped at the chance for studio space, which makes sense because not only does Alex make large-scale work sometimes, he is also dealing with thematic variations on a single body of source material: the mythic character of the American cowboy. I described his process of dealing with cowboy-related subjects as reshuffling a deck of cards, but he has a much better way of describing it: that he has a certain number of letters in an alphabet, and he wants to see how many words he can make before he adds any more. The guy knows how to talk to a writer. There’s this really powerful element of fantasy, especially male fantasy, present in Alex’s work. Because it’s cowboys, right, but this romanticized version of cowboys–the way you see cowboys when you are a little boy, and you find out there’s a job where you get to ride horses and wear boots and shoot “bad guys.” All over the studio are sculptures made of dollar store plastic cowboys-and-indians sets, which grounds the whole set of icons in this kind of innocent, childish place (as does Alex’s bright, cartoony style). Which is a kind of whitewashing, of course, because in point of fact, the legacy of the American West was one of appropriation and genocide, and cowboys are people who would make really bad citizens. Having come to art by way of cultural anthropology, Alex is certainly aware of these facts, even as he presents a more simplified reality–he acknowledges the work being in progress, and we talked for awhile about how hard it is for your studio to have giant street-facing windows that reveal your process, including struggles and mistakes, to the whole world (something that Scott Hocking mentioned, as well, in this interview that went live at Detroit Art Review yesterday).

It’s easy to categorize Alex’s work as being male-centric, because it is. He mentions a distinct desire to keep women separate from his artwork. Which, ironically, makes it sort of…feminist, because he’s not, even a little, using women as objects (or even subjects). The stereotypical counterpart to the Wild West Cowboy is the Hooker-with-a-Heart-of-Gold (a trope that made me hilariously recall going to one of those Wild West portrait studios as a kid of probably 10, and being dressed as a prostitute. That’s a thing that happened). But Alex isn’t interested in women reduced to flimsy stereotypes–he is interested in reconciling male desire, male fantasy, male self-image. Male-centric, sure, but also reducing men, in this case, to objects (boot, target, horse, gun). Nice reversal.

I think I talked about Channing Tatum at that point, which Alex tolerated because he is extremely good-natured, and then it was time to go. But I’m definitely interested to see the final yield from what looks to be a productive summer of playing cowboy from Alexander Buzzalini.