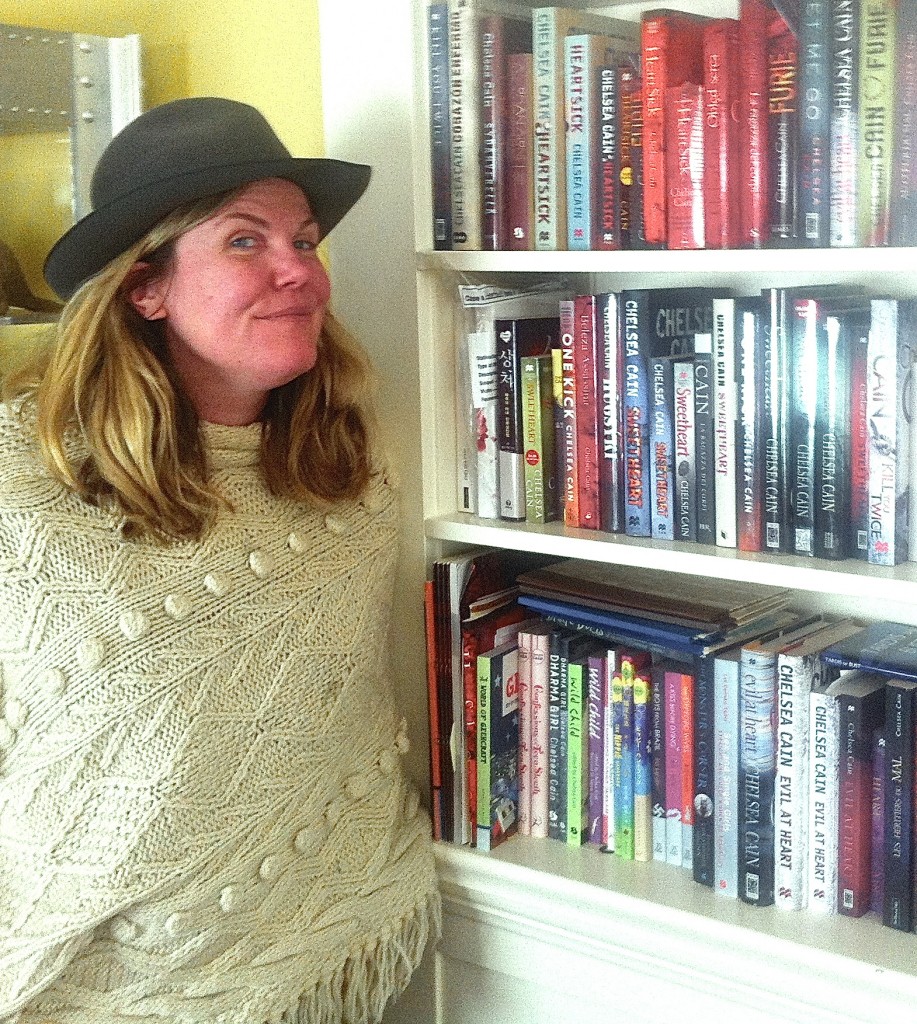 Location: Jam on Hawthorne, Portland, OR

Well, I’m a little (a lot) in awe of Chelsea Cain. That her mystery stories are often bestsellers tells me that some mass market is at least as twisted as I am, and there is some comfort in that. The funny part is, Chelsea seems, like, real normal. She is a friendly and generous person, a deeply engaged parent, a champion of Portland. She has a Corgi. That’s not very sinister.

And, yet, but–as she is quick to point out–if you get to know her a little, Chelsea has a pretty dark sensibility, that even her pert blonde demeanor cannot entirely obscure. Of course, getting to know Chelsea, even a little, is a challenge, because she is a practiced observer of human behavior, content in most situation to listen, observe, gather information. What’s going on in her mind? Don’t even worry about it, she seems to say. Then she goes and writes some torture chamber erotica.

But I was bound and determined to get something out of Chelsea, and I started in the most banal possible place–how did you go from kind of jokey, wholesome books about hippie living to psycho-sexual murder mysteries with female protagonists that gleefully dismantle their victims and gender-based stereotypes in the same fell swoop? Simple, says Chelsea, “I got pregnant.” Swear to god, I love this woman.

Because, while a lot of people might say that the birth of their child signaled a change in their tolerance for violence or gore, Chelsea found it to be a moment that put her profoundly in touch with body-as-system, and a system that produces some pretty intense outputs. Started as kind of a guilty mental affair, the first Gretchen Powell/Archie Sheriden story, Heartsick, slowly became all-consuming (as affairs are wont to do). But Chelsea has maintained the passion, now happily married to mystery/thrillers all these years later (did that metaphor get confusing? She’s also happily married to film critic Marc Mohan, about the nicest guy). Chelsea pointed out that violence, in and of itself, isn’t really the scary part in a murder mystery–it’s the vulnerability. Ultimately, she sees what she does as character-based storytelling, at its root, and genres in general have more to do with plot. The plot is just an excuse for her to explore, in the case of the Gretchen Powell series, the relationship between the two main characters, and the shifting power dynamics therein. More recently, Chelsea has been dabbling in comics–I hear that the MOCKINGBIRD one-off she did recently has potential for a serial run–and last year introduced a new series featuring a woman named Kick. If you think Heartsick and friends is pulling no punches, One Kick will have you on the ground (and take your wallet? what is with my metaphors today?)… Let’s just say that Chelsea has found a new area to be unflinching. That said, like much of her work, there is a distinction to be made between graphic and violent content. Violence is a part of life and nature, and I guess if you can’t handle that, you can always read Jane Austen–but Chelsea doesn’t drag you through painfully graphic recounting of the loaded psycho-sexual backstory of her main character. Her point is that Kick is a woman in charge of her pain, her history (or struggling to be), has been through a Bad Thing, and salvaged what strength she can from it. A lot, as it turns out. I think that’s about the most you can ask of anyone.

Anyway, keep your eye on the skies (er…bookshelves) for more goodies from the morbid mind of Chelsea Cain, and in the meantime, I’ll try to take every pearl of wisdom I could wrangle out of her. I will probably never grow up, but if I do, I hope I’m just like Chelsea.