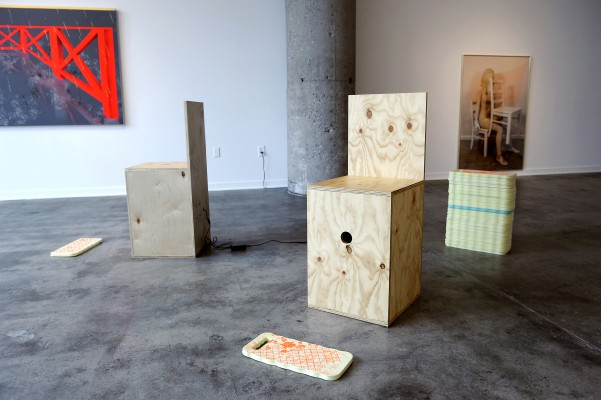 Kupertus’ “Peep Seats” running video loops made collaboratively by the pair, on view for all prepared to kneel. Image courtesy of the artists and Simone DeSousa Gallery.

“Discreet Vulgarities,” which opened at Simone DeSousa Gallery on September 11th, could be accurately billed as a two-person show, featuring the work of photographer, multi-media, and performance artist Nicola Kuperus, and fine art painter and videographer Adam Lee Miller. But it could just as easily be considered a kind of two-headed hydra, with only the technicality of distinctions between two artists who have been in close conversation for two decades of create collaboration, as well as a 17-year marriage during which, according to Miller, they have only spent a handful of nights apart from each other.

On the surface, there are distinct bodies of work that can be instantly attributed to one artist or the other—Kuperus’ contributions largely consist of photography, particularly to capture moments within open-ended performances, as well as interactive sculptures; Miller is a formalist painter of commonplace building materials like gutter downspouts and pine studs, the tight rendering of which initially conceal a series of sly insinuations and vaguely dirty jokes.