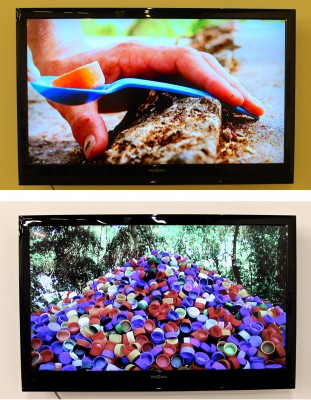 That is the simple, pointed statement made on a set of posters by Runo Lagomarsino, free for the taking by anyone who attends “The United States of Latin America” (USLA) exhibit, cornerstone of the MOCAD’s freshly-launched fall program. The show was co-curated by MOCAD’s Senior Curator at Large, Jens Hoffmann, together with guest curator Pablo León de la Barra, UBS MAP Latin American curator at the Guggenheim, with support from the Kadist Art Foundation , which loaned many of the works on display. Vincent Worms, KAF Chairman, had this to say about the show: “This exhibition illustrates how the Kadist Art Foundation likes to bring together collection and exhibition: international artists addressing important socio-political issues, and talented curators like Jens and Pablo—having them dialog in a visually strong exhibition.”

Certainly, USLA covers a lot of ground, both conceptually and regionally, bringing together artists from all over Latin America—a massive and diverse area that, as León de la Barra pointed out when I spoke with him and Hoffmann during the show’s installation, sometimes plays second fiddle to the United States when it comes to American identity. “The exhibition’s title plays a little bit with the idea that the United States has almost taken the name of America—which is a continent—for itself,” says León de la Barra. Whether it will achieve its goal of sparking a dialogue between these two Americas is anyone’s guess, but the show is full of aesthetics and themes that are sure to resonate across international lines.