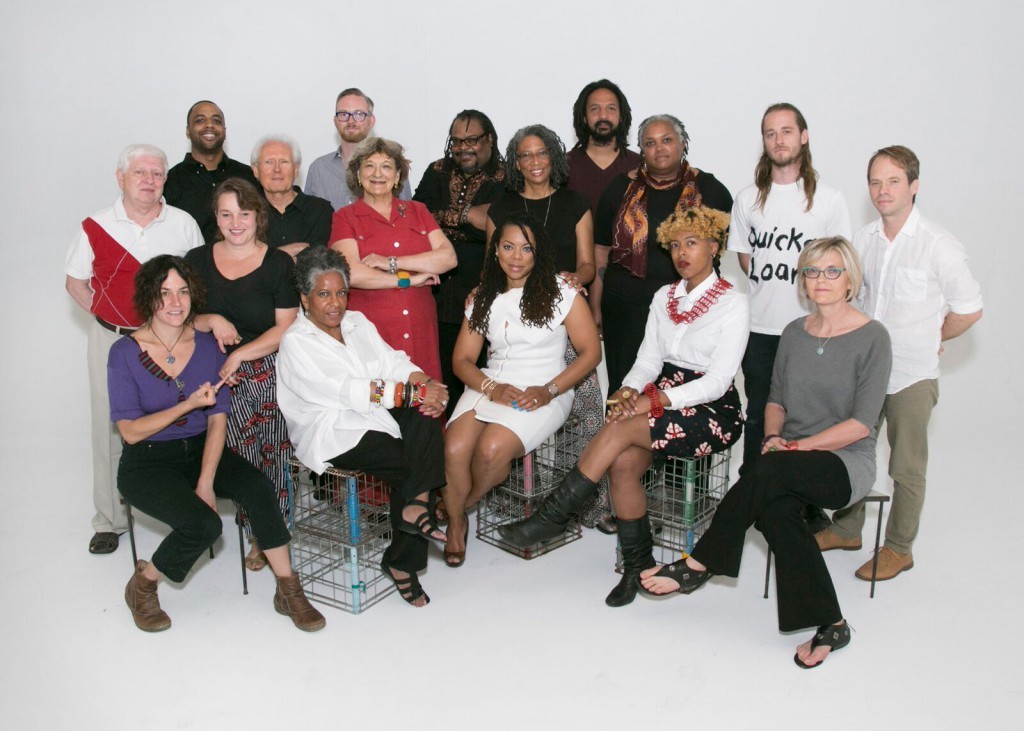 Been a big week for catching #KAF15 in action.

On Tuesday, I had BWTA with the one, the only Faina Lerman. You can catch that action here.

On Wednesday, I scored a press pass to the Creative Economy Policy Summit, put on by our own Creative Many. I have come to view the CM/KAID crew as much a fixture of my Kresge family as the fellows, so I’m always happy for a chance to get to know this dynamic group of folks, many of whom are artists in their own rights. For official coverage on the 2015 CEPS, stay tuned to the Knight Arts blog; it was a decidedly eye-opening experience, to sit in a room full of a lot of the decision-makers that fund arts in the city, and see how they are thinking about their efforts, and what their goals ultimately are (hint: building the economy). Unofficially, I felt a bit that having a conference about the creative economy without very many artists present to express their needs feels a little like a museum board deciding to create diversity in their programming without including any people of color within their administration. Until you have people with skin in the game at the table, there will always be some kind of separation between policy makers and end users. I wonder if there’s a way to cross-pollinate a little more. But I can see how to business people, numbers carry a lot of weight, and I surely appreciate the people at Creative Many, the NEA, and others, who are doing the research that leads to the creative class getting recognition as the massive boost to the economy that we are. Commiserating with Samantha Schefman from Playground Detroit, and Augusta Morrison from the MOCAD, at the Creative Economy Policy Summit. Image by Sarah Nesbitt, courtesy of Creative Many.

Some of us Literary Fellows had an impromptu crit group at Supino’s on Thursday, before the professional development seminar at Signal Return. Jeff, Lillien, Des and I made the scene, with Billy there in spirit. I have to say, in reviewing the work, I was reminded that, you know, these are all really good writers. Like, incredibly solid writers that you have to work hard to even find suggestions. Lillien’s poems absolutely gutted me. I had to go lie down. And Des’ fast fiction, man–next time I will wear a helmet. That stuff goes fast. And Billy, well, Billy didn’t make it to the meet up, so NO CRIT OR COMPLIMENTS FOR YOU (j/k love you). Good for this introverted soul to remember that in writing, like chess, you improve about as much as the company you keep. Image by our server? Courtesy of Desiree Cooper.

I saw a few KAF15 faces at the professional development seminar, including Carole Harris–who clued me into the estate sale event of the season, thank you very much–as well as Annica, Saffell, and Walerian. Carole and Saffell are in a three-person show, insights, out at the NCA Gallery this month–I was away for the opening, but I’m determined to get out there on Wednesday to check it out!

Then, and I cruised Eastern Market After Dark, I bumped into Chris Schanck over at OmniCorps Detroit, still managing to shine brightly despite some clear signs of overload. We commiserated on the ravages of success–sounds like an asshole problem to have, I grant you, but bear in mind, my friends, I have always been a more graceful loser than I am a winner (just ask anyone who’s ever played pinball with me). Learning how to handle upward momentum is not actually any easier than learning how to cope with a spin-out. It’s all pretty intimidating. Friday was the KAF15 brunch o’ the month, and we discovered the secret to Antietem is just to eat four separate brunches back-to-back. What a wonderful meal, and a great opportunity for me to chop it up a little with Cynthia Greig and CM’s Sarah Nesbitt and Shivangee Pandya. Later on that evening, I encountered Jonathan Rajewski at the Wasserman Projects opening. On Saturday, I dropped by Public Pool, to catch Nancy Mitchnick lounging with a novel in the glow of her solo installation, “Storm Trees + Mr. Woodman,” which is really worth a see while it’s still there. I’m looking forward to interviewing her for an October piece in Detroit Art Review, and embrace absolutely every chance I get to observe this lady in action. My Nancy Mitchnick impression is really coming along, I must say. Oh, snap, nearly caught them all in the same week! That George Tysh is a slippery fish. I know Dee was in New York and Tiff’s in France. The one KAF15 I have yet to really find out anything about is Kahn Santori Davison, but never fear. This girl detective is on the case!