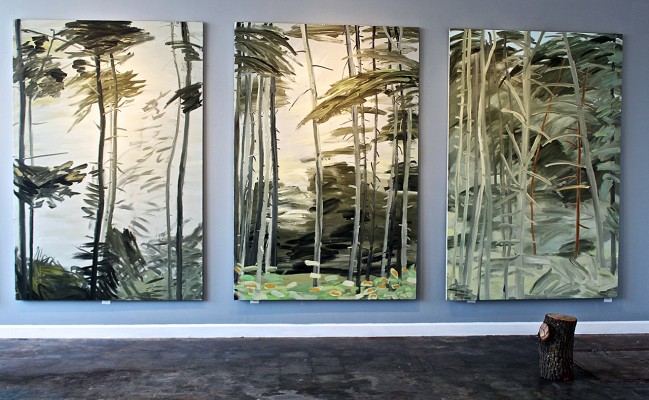 Nancy Mitchnick is a Detroit legacy that spans generations. After witnessing and creating work within the Cass Corridor scene, she moved on to find success in New York City, before eventually falling into a series of teaching positions, including working at CalArts in Valencia, California—“the conceptual art school when painting was supposed to be dead”—and a long-term stint at Harvard University. At long last, she has returned to her native homeland of Detroit, and her efforts to make new work and show selections from her existing works have been recently propelled by being named as a 2015 Kresge Visual Arts Fellow.

Over the last month, Mitchnick has held court in Hamtramck’s Public Pool community art space, presiding over a solo show titled Storm Trees and Mr. Woodman. The “Woodman” drawings are a series of mixed media pieces on paper starring a figure inspired decades ago by a literal piece of wood that Mitchnick couldn’t bear to sacrifice to her woodstove—but it is the wall of “Storm Trees” that really captured my attention—at once wildly gestural and absolutely formal. Mitchnick took some time out during a work day at her newly enhanced studio space in the Russell Industrial, to talk to me about the creation of these particular works.

Nancy Mitchnick:     This is about the tree paintings, yeah?

NM:                             Well, not exactly, but often the work is an implied grid. I don’t plan it, I find it. When I was a kid, I never could tell you why I painted anything, and I liked that it was mysterious—the whole process is like a revelation to me, so I never feel like talking about it. It’s like talking about sex. How are you going to explain how it feels? You know, it’s private and between two people—usually. [LAUGHS]