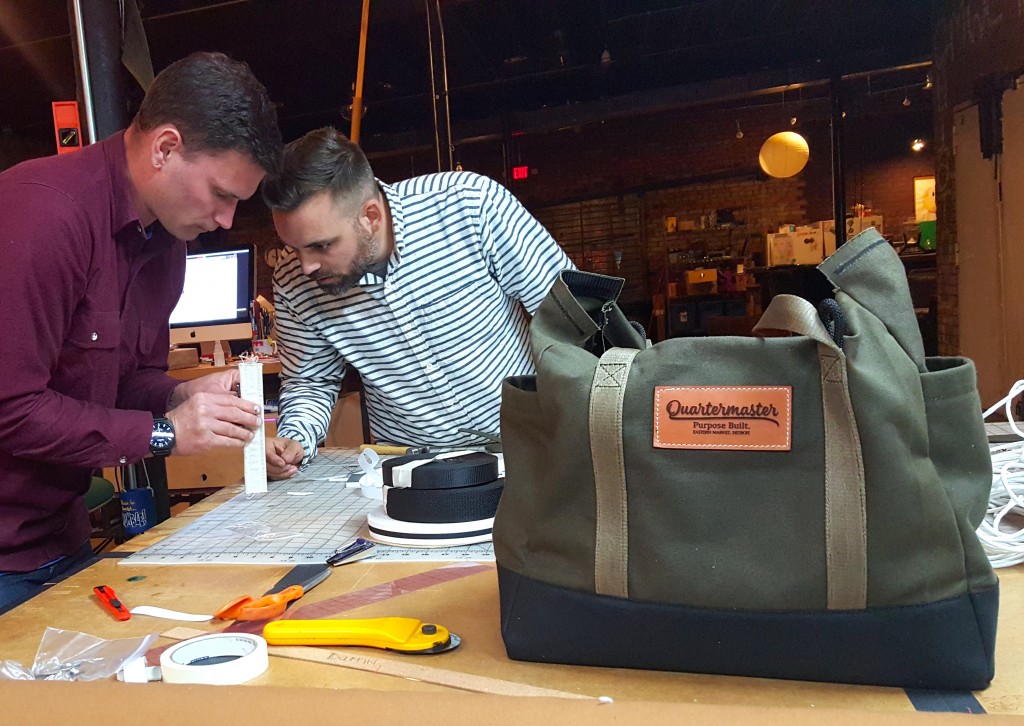 You know what I often wonder? How it is that men get literally anything done without carrying a bag. Where do you put all your stuff, dudes? I know, I know, we live in a society ravaged by toxic masculinity, which prevents you from adopting the useful habit of regularly carrying a bag, and any man who tries will immediately have his bag characterized as a “man purse.” It is a terrible burden and we all struggle with it, and it’s great how you compensate for that by handing off your literal burdens to the woman closest to you to carry in her bag, NBD because we are basically just pack animals anyway (lol jk fuck you). All of which is an angry way to say: never fear, men, your problems are solved! Quartermaster is here!

I have no doubt that you’ve been pinned in place since I promised a few more thoughts about master carpenter Jason Huyghe, who earned a great deal of my esteem by building the cutting table of my dreams like he was making a cheese sandwich. Best believe that Jason showed up for the job carrying many useful things, and he was carrying them in about the manliest bag I have ever seen. Where did he get that bag, I wanted to know. And that’s when I discovered what’s better than a man who can build things, which is a man who can also sew. And what’s better than that? Two men who can also sew. The second man is Darrin Brouhard, and he’s the mastermind behind Quartermaster–a joint venture based out of OmniCorp Detroit (OCD), a hackerspace in the Eastern Market district. Darrin worked for years at The Hub and also taught me how to thread an overlock machine…these are useful people, is what I’m saying, and they’ve designed a bag for useful people.

It is easy to imagine, when I talk about the fact that Detroit is a paradise for creative people, that I am talking about the art community, because I focus a lot of attention there. But Darrin and Jason are a great example of what makes Detroit such a powerful incubator for creativity, in whatever form it takes. I don’t necessarily feel the need for distinctions between art and craft, or purpose-driven labor-intensive production of beautiful useful objects and social practice art, which is becoming increasingly relevant in places like Detroit. Or frankly, between male and female labor or habits, other than not wanting to carry stuff for people who don’t have bags of their own.

Anyway, it’s a gift-giving time of year, and if you’d like something for the useful person in your life, I recommend one of these bags. The gift of a useful tool is a gift to everyone, really. Check ’em out.