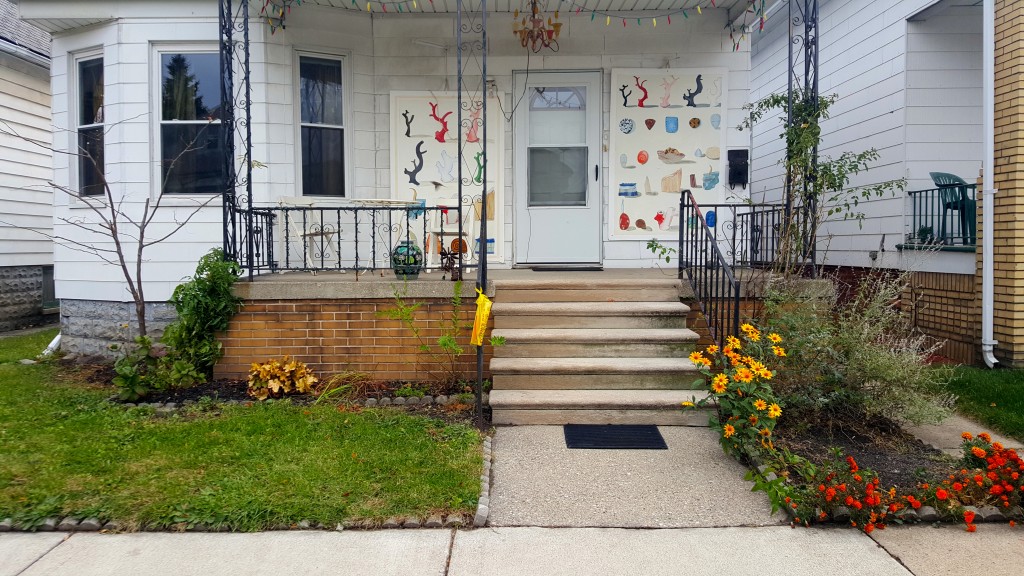 It’s funny how you can get to the same place as someone else by a completely different path. Clara DeGalan was born and raised on the East side of Detroit, and though she has spent time living, working, and teaching outside her native city, she finds herself back again (Hamtramck, at least). I have made my way to Detroit via literally every other place in the nation, and can attest to the fact that Clara located the best place right from the jump.

Similarly, Clara is working in a new artistic direction, one which sets aside the most conformist aspects of her formal training as an artist, and seeks an intuitive path–one that is grounded in her early interests, including an investigation of “New Age” culture and tropes. Here, my native Californian roots have put me ahead of the game–I grew up with children named Moonbeam in a place colonized by hippies, where it was not out of the ordinary for someone to tell you, unprompted, that you had a radiant aura. And as for art-making, I have more or less always run on intuition.

But here we are, a meeting of two minds! It is also worth noting that for some time, people would mistake me for someone they knew or insist I had been at an art show when I hadn’t. It became clear that I had a Detroit doppleganger somewhere out there–not just visually similar, but also prone to attend art openings. I see that it must be Clara; we are by rough outlines, similar, inasmuch as curly-haired white girls of medium height are similar. Clara is a runner, though–the runner of Hamtramck, not a town prone to street jogging–and that’s not really something I could ever be mistaken for. We both write and think about art a great deal, though, so I’ll take it as a compliment.

Anyway, my doppleganger is up to a fascinating and just-surfacing body of work, which seems to emerge from (or at least in tandem with) the drawing demonstrations that she performs for the classes that she teaches at Madonna University. Religion and the ritual associated with it have a set of symbols and artifacts that are of great interest to me–raised in more or less a complete religious void–as well as Clara, raised and lapsed Catholic, but experiencing renewed exposure to these ideas through her teaching job. Finding a way to integrate the work that a working artist/teacher must do into an active practice is a stroke of real brilliance, I think. It seems to me that Clara is still finding her way in this new vein, and there is a lot to look forward to when a person who has steeped themselves in the structure and background of their discipline finally throws off the reins and starts to break her own path. I’m excited to see where it goes–maybe it can tell me a bit about where I’m headed, myself!