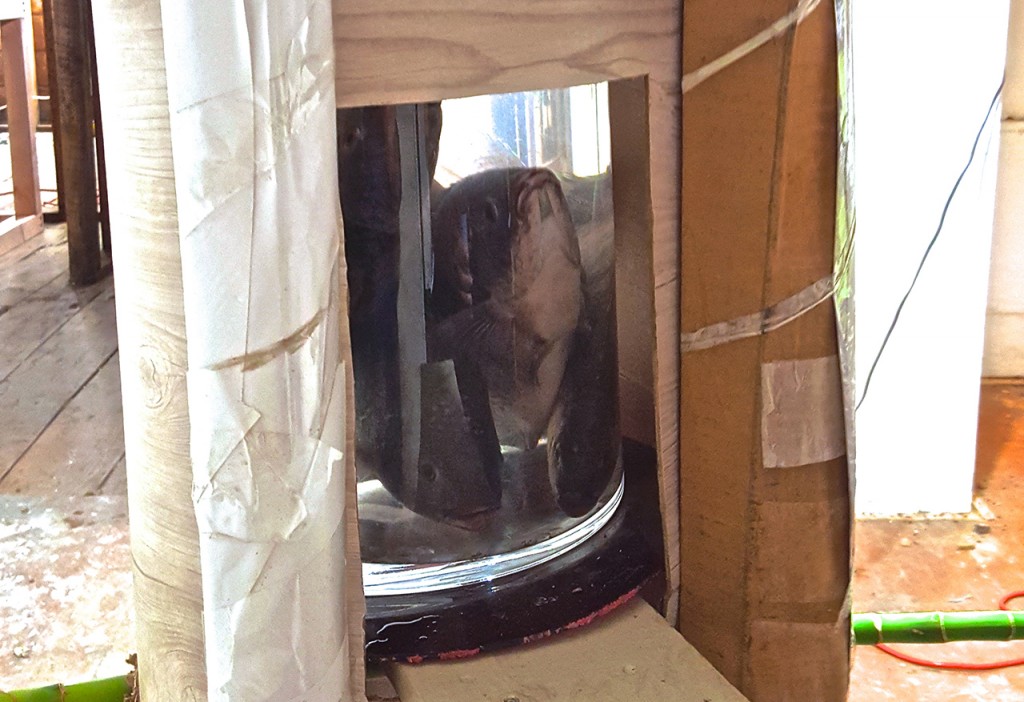 HAMTRAMCK, Mich. — The disclaimer “No animals were harmed in the making of this film” is something films like to let you know when it appears that some animals may have been harmed in the movie’s making. My suspicion is that artist Andrew Mehall is not in the position to offer us any such assurances. Two of the pieces in his solo show New Ideas (Reinforcing Shitty Old Ideas) feature large, live fish in uncomfortable spaces, and it bodes not well for the fish.

Did this bother me? Yes, and I was not the only one. The show opened in the midst of the 5th annual Hamtramck Neighborhood Arts Festival, which encourages residents of Hamtramck to engage with their local art spaces, including Ben Thompson Gallery’s temporary outpost on St. Aubin (it will be moving to a permanent space on Sobieski following Mehall’s show). Inside the space — an unfinished house stripped down to the studs — Mehall’s installations (curated by Young World colleague and self-described “primary interlocutor” Ben Hall) were at times indistinguishable from the demolished interior. “Having that ability to entirely control power, sound, and light are the real benefits of tackling a raw, gutted space,” said Mehall, about working in the gallery’s temporary location. “In that way vacant houses are no more empty than the basements and garages of the suburbs.”

In the room that housed the show’s most dramatic work, “It Depends On How Much Time We Have” — a Plexiglass tube that held four live tilapia in a space so tight they could not turn around — one of St. Aubin’s residents, an older gentleman, spoke my mind aloud. “That’s too much, man,” he said.