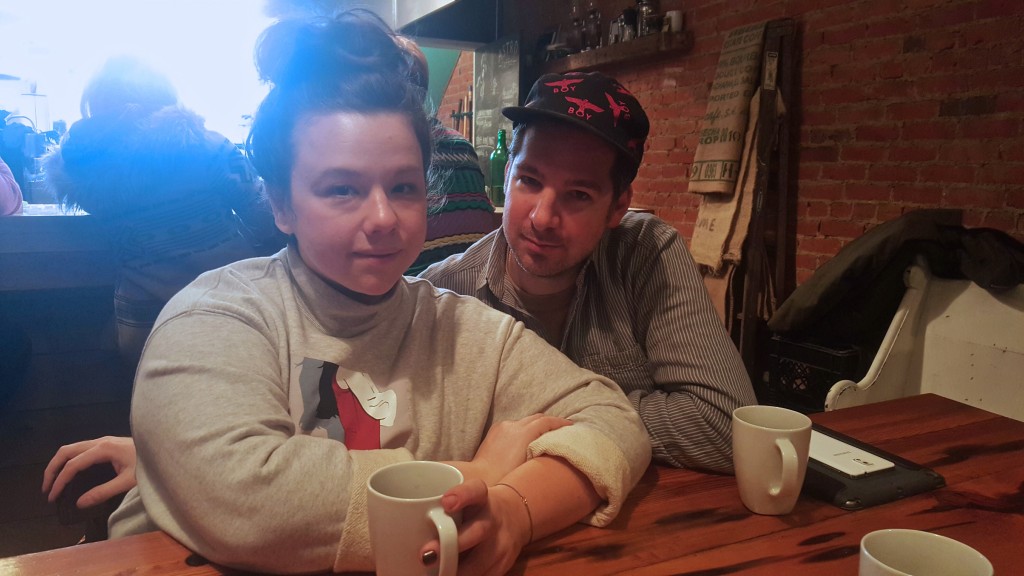 AN & JD – Coffee drinks of some kind

Every city has their version of the “power couple.” The Detroit version is typically two individuals that align professionally and creatively to make amazing things together. Ash and Dones are one of these. They make nightlife, in the form of their long-running dance party Haute to Death. They make creative campaigns and build brands at Studio Teal, which Jon founded in 2007. And Ash makes art, some of which will be featured this Saturday, at the upcoming Holiday Recess at the Pickle Factory. The main topic for discussion over breakfast was the math on the artist’s way – whether it’s possible for all people to live fully actualized and free existence, or only possible for some because most people don’t. It’s the Eat, Pray, Love conundrum–there wouldn’t be a market for books about going out and living your dreams, if everyone was going out and living their dreams. Getting paid to do what you love might only work as a niche activity.

And, as Ash pointed out, we need everybody. She cited a one-panel comic she likes, that has a person suffering a medical emergency, another yelling, “Is anyone a doctor?” and eight people saying, “I’m a DJ.” When I think about my history in corporate advertising, there was this palpable tension between the creative and accounts departments–people with wildly different skill sets working on teams, but somewhat at odds with each other. Really, we need both. It’s hard to afford to be an artist; it’s at least a little easier if you have an accountant on your side.

So I came away from breakfast feeling pretty positive about the future of workflow–one of Dones’ obsessions, and a lively conversational thread that ended up drawing in one of our adjoining cafe patrons, who is currently editing a book on the subject. Pretty positive, in general. Certainly positive about my Saturday night party ticket – looking forward to the opportunity to see some of Ash’s solo work, developed and honed in her recently stint as one of the Cycle 11 Red Bull House of Art residents – the final cycle before they adopt a new formula that involves bringing in out of town artists and shortening the exhibition runs, in order to open the space for community events in the intervening times. Exciting stuff!