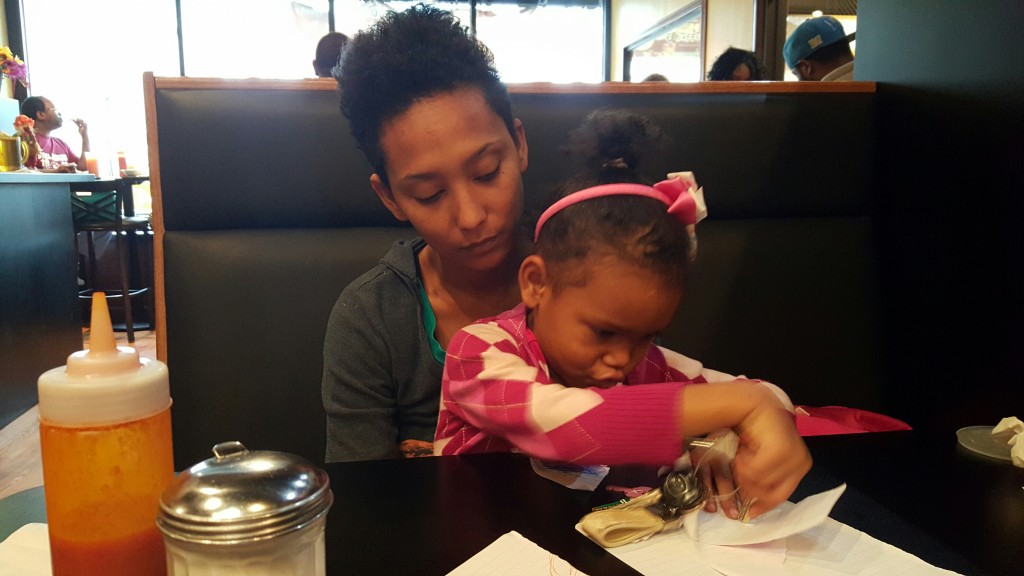 “So,” says Halima, “what are we here to talk about?” Can I tell you how much I love a person with no interest in small talk? I can’t say it’s a trait universal to Detroiters, but it’s present in all the ones I like the most. I should tell you I’ve had a little obsession with Halima going for a while–all the times I’ve encountered her, whether it’s speaking about urban agriculture, on a panel about gentrification, or just in the art scene mix, she strikes me as someone who speaks truth from the very center of her being, without losing the message in (justifiable) anger. I myself am a person who gets easily furious, and admire the control that Halima brings to fraught subjects.

We ended up touching on some of those subjects, as is almost unavoidable for anyone with a stake in the “old” vs. “new” Detroit transition. Seeing the disproportionate impact of the new mayoral administration on poorer Detroiters who have hung on at the fringes versus more affluent newcomers is, again, great cause for righteous anger–but Halima speaks on these matters with calm dignity. I found her perspective on the mind-trap of social services resonated deeply with me–whether it’s getting a so-called handout from the government, or showing up every day for a mundane office job, we very quickly trade our freedom for some measure of security (which increasingly proves to be false security, anyway). In Halima, I see another person whose every move and idea–and they are many, and diverse–is a step toward freedom.

This proved to be a real area of conceptual overlap for us, as we are both artists who spend the majority of our time doing things that, from an outside perspective, look like not-art. “I’m trying to consider all the things I do in life to be part of my art,” says Halima, and I say YES. That is correct. To be honest, I don’t think most artists can help but live in a state of constant practice, and it is mentally fortifying if you can consider the business of life to be a part of your art, rather than a distraction from it. I explain that this is a Breakfast With the Artist–something I assume people know about, because I am self-centered–and Halima’s eyes widen. “Are you saying I’m in an art project right now?” Yes. Here it is, an unsteady work in progress, moving forward in a city full of people who are freer than they know. Let’s cut the small talk and tell them about it.