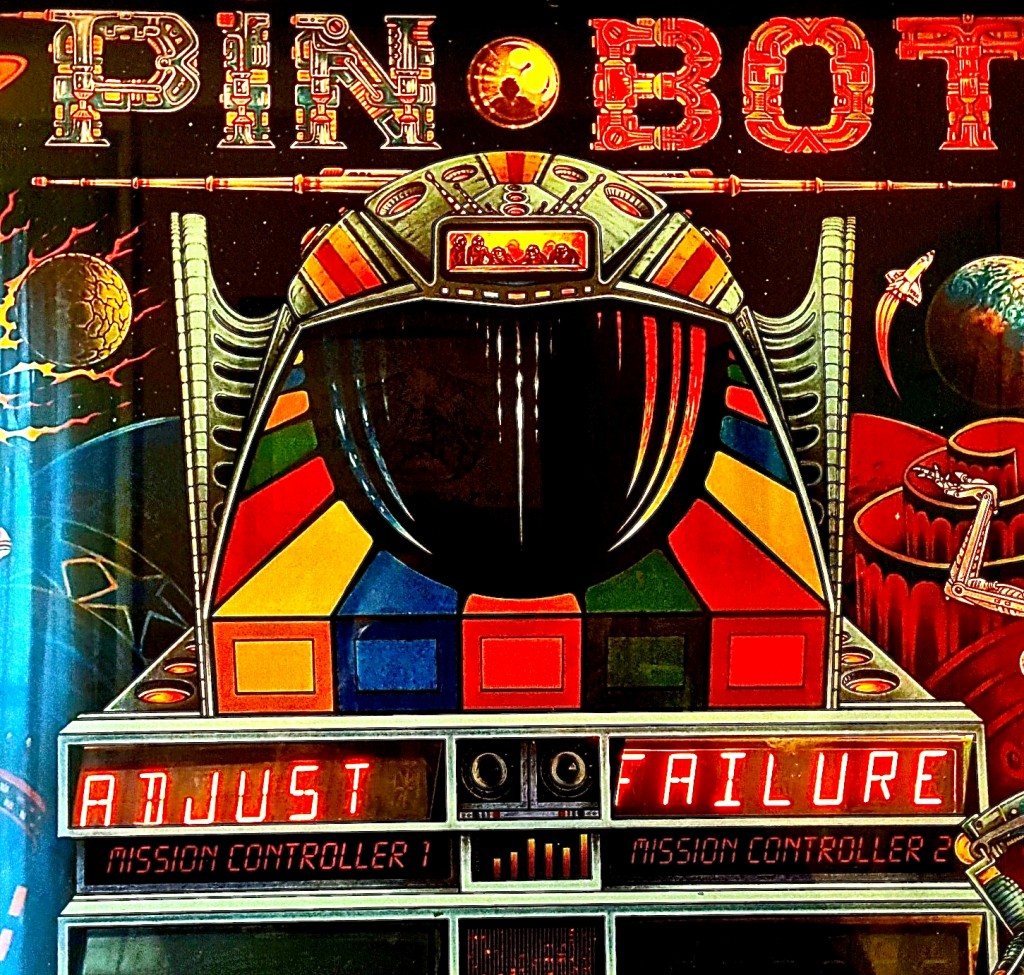 This conversation with Cedric played out over two days–first, an hours-long conversation at a coffee shop, followed by a studio visit at my place, where Cedric got to take a tour of Sharp Acres and reflect a bit on my chaotic studio practice. In both conversations, Cedric raised the idea of object-oriented ontology, which is something I’m going to need to strive hard to understand, as it sounds fairly relevant to me on the surface of things.

Of all the objects in my house, Cedric was most interested in the pinball machine in my office. I should mention at this point that all which follows has very little to do with Cedric and was mostly not discussed at the time, but has arisen for me in reflecting on our conversation about pinball.

Cedric loved the PinBot machine. He pointed out the [CORRECTION] Escher reference in the reflected viewer/player in the pinball between the words “PIN” and “BOT” (as well as making a Dali reference in another context…we talked a long time). He was completely taken with it as an aesthetic object, and then delighted to find out it works?! Because for Cedric, a pinball machine is “a kinetic sculpture.” And for me, it is a pinball machine. Why would I have a pinball machine that doesn’t work? But then, I guess, an object-oriented ontologist might argue that the pinball machine might exist for something besides me, or other people who like to play pinball? I need to do some reading on the subject.

And I’m delighted that Cedric [CORRECTION] had a moment of reconnecting with how awesome pinball is…but I guess what concerns me a little bit about looking at a pinball machine as a kinetic sculpture is that it strikes me in the same way that Andy Warhol’s Brillo Boxes treat the conscious work of another person as a kind of found object. In attempting to use the commercial packaging of the Brillo boxes as a way to juxtapose art and commerce, Brillo Boxes casts the Brillo box design as a work of commerce. However, as Arthur C. Danto, who wrote extensively on Warhol’s practice in general, and Brillo Boxes specifically, says:

“In an odd quirk of fate, the Brillo box design itself had been generated by James Harvey, an artist of the Abstract Expressionist generation moonlighting as a graphic designer.” (read more here)

What “odd quirk of fate?” With much due respect to Danto, I find it at this point a crass assumption to say that because someone applies their aesthetic abilities in the service of design rendered for a fee from a corporation (or, perhaps, for free on Instagram, to use a more timely reference), they are less an artist than someone, say, grant- or patron-funded to create objects that, at least theoretically, may be bought and sold on the art market. James Harvey was presumably hired as a graphic designer because of his artistic ability, not in spite of it. As I recently learned during my visit to the Neon Museum in Las Vegas, the most eye-catching combination of colors in daylight is red and yellow, which is why so many of the signs combine those colors in their non-electric fields (incidentally, this is also the color combo of the stencil art on the sides of the Pinbot machine)–if that isn’t color theory, I’m not sure what else it is.

In his book, “The Transfiguration of the Commonplace,” Danto seeks to create a new structure for considering art which is indistinguishable from non-art “real” objects (such as Brillo Boxes versus Brillo boxes). I do not pretend to have a perfect understanding of the climate of the art world at that time, nor a total grasp on Danto’s writing, though I credit myself with a fair attempt at comprehension of this book, at least–I do think, however, that the initial practice of readymade art was a poke at attempts to commodify art, no less pointed for being somewhat playful. The art market responds in the only way it can: to buy these things out. Throw money at anything that threatens you. I love you, art, but sometimes your world really gets me down.

Here’s a quote from Danto’s book, one which is a North star for me as an arts writer:

Criticism then, which consists in interpreting metaphor in this extended sense, cannot be intended as a substitute for the work. Its function rather is to equip the reader or viewer with the information needed to respond to the work’s power which, after all, can be lost as concepts change or be inaccessible because of the outward difficulties of the work, which the received cultural equipment is insufficient to accommodate. It is not just, as is so often said, that metaphors go stale; they go dead in a way that sometimes require scholarly resurrection. And it is the great value of such disciplines as the history of art and literature to make such works approachable again.

While I acknowledge the power-in-context of readymades and so-called transfiguration of the commonplace, I am not interested at this point in what a given artist can shoot with a tranquilizer dart and drag back to the white cube to be presented as art. Enough of that. We are not here to sell something to the machine; we are here to destroy the machine. I am interested in the ways that art is the Trojan Horse, not the cash cow. I am interested in PinBot as a work of art inasmuch as it is a work of art that costs 25 cents. There is NO artist that can make PinBot a work of art; it is a work of game design made by these people:

Game Design: Barry Oursler, Python Anghelo
Mechanics: Joe Joos Jr.
Artwork: Python Anghelo
Software: Bill Pfutzenreuter
Sound/Music: Chris Granner
“Discovering” these things as art is cultural appropriation, and carries with it the same kind of danger as more racial or economic forms of appropriation. The art world has nothing to teach PinBot. But maybe it could learn something about creating an object that seamlessly infiltrates bars, laundromats, and arcades, meeting “real” people every day, talking to children and slyly exposing and inundating them with messages, presented across an array of captivating and engaging media.