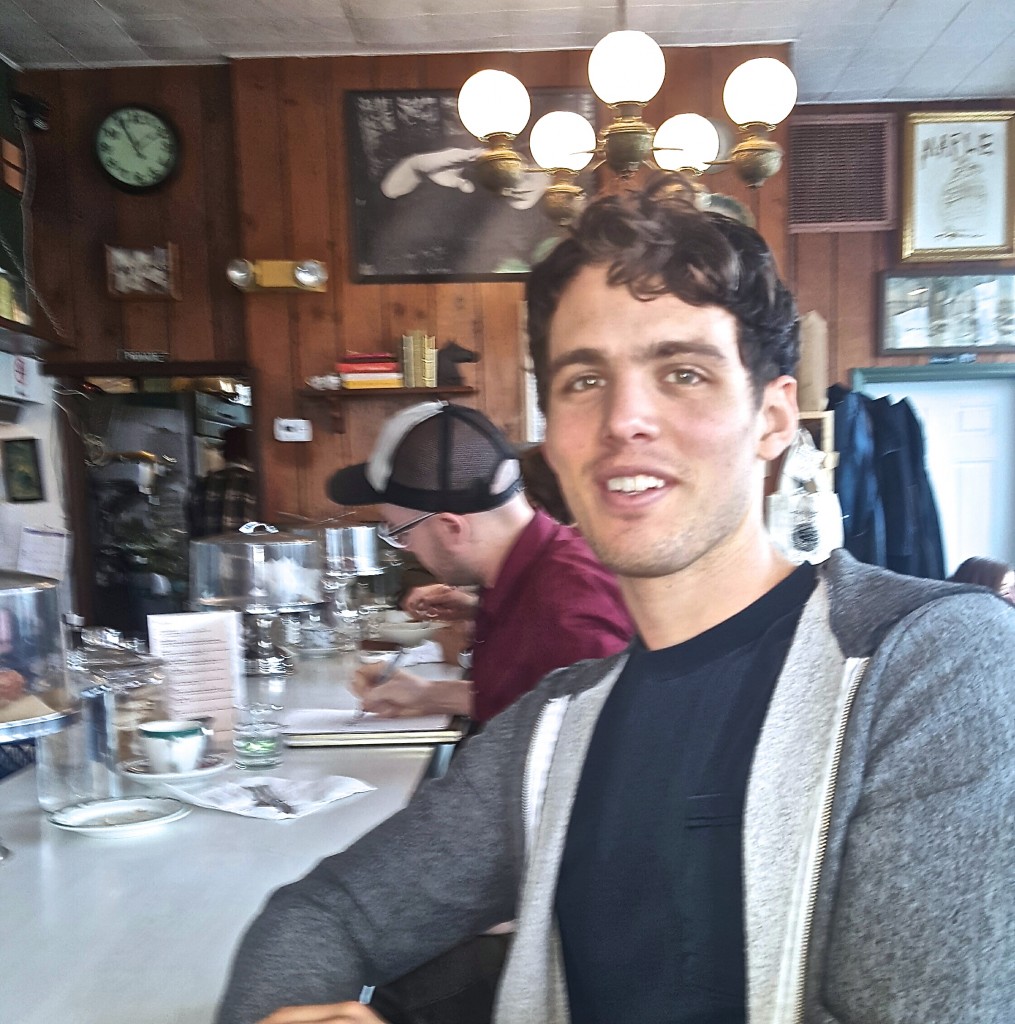 Ham and I met for breakfast, to continue a conversation we began at a New Year’s Eve gathering. It has to do with professionalism, and how it impacts your practice as an artist (among other things). I don’t know Ham very well, but I have known him for awhile now, and I will say that he does not strike me as calculating. Whatever mathematics govern Ham’s world, it is the geometry that brings interesting concepts into being as art objects, not the challenging calculus of social manipulation (and certainly not, as we discussed, the basic arithmetic of making a living). Which is interesting, because a lot of Ham’s work seems to have to do with people and shared experience. Let’s call it human telemetrics.

Here’s a video of a balloon corral installation by Ham. It will probably improve your day. Here is an essay about Ham’s work by Rebecca Mazzei – it helped me a lot to understand some of the factors that are important to his practice.

At the center of our discussion, I created the distinction between art as calling versus art as profession. While the two are not mutually exclusive, both contain an inherent paradox around romanticizing art as a free and unfettered process. When art is your profession, you are going to have to deal with certain aspects of it as a job–aka, a thing you do whether you want to or not. No version of work, even work you love, is without its mundane details or tiresome social obligations. Artists, especially makers, who love their craft and their process sometimes quail at the social agendas, the small talk, and the seeming requirements of the scene. And we’ve all heard about the double-edged sword of success; once you do break through, you are pressured to continue making the same work that brought your success…which, for most artists, amounts to brain death. You might as well be an actuary at that point.

So then, we take a bold stand: art as calling. My art will remain free from these professional expectations. I make what I make, and screw the rest. Ah, but unless you are independently wealthy, there is still a living to be made. That amounts to a second, third, or fourth job–teaching, seasonal work, or, in Ham’s case, being an EMT. Obviously, having to devote full-time (or even part-time) hours to a job that pays the bills cannot help but have repercussions on one’s ability to make art. Your time is largely not your own, and what downtime you can salvage from making a living must often include mental recovery from the process, before you can do anything worthwhile. It’s a struggle that every artist with a day job knows well.

Ham is weighing out these issues–as, I think, are most non-wealthy artists. I can’t say that I advocate strongly for one position over the other, although I’ve clearly made a choice for myself. Because I’ve had some kind of a job since I was 13, and what I know is: work is work. You can pay rent into the job system, or you can buy equity in yourself. It’s not always as easy as just deciding, but making the decision to reserve your labor for yourself is a powerful one, yielding great dividends. In the long run? I do not know. I see a lot of people sacrifice their whole lives for the illusion of security…and also people who make realtime decisions that leave them in a bad spot later. I know that I cannot bank my most vital years into someone else’s system. I retire as often as possible. One of these days, it might stick.