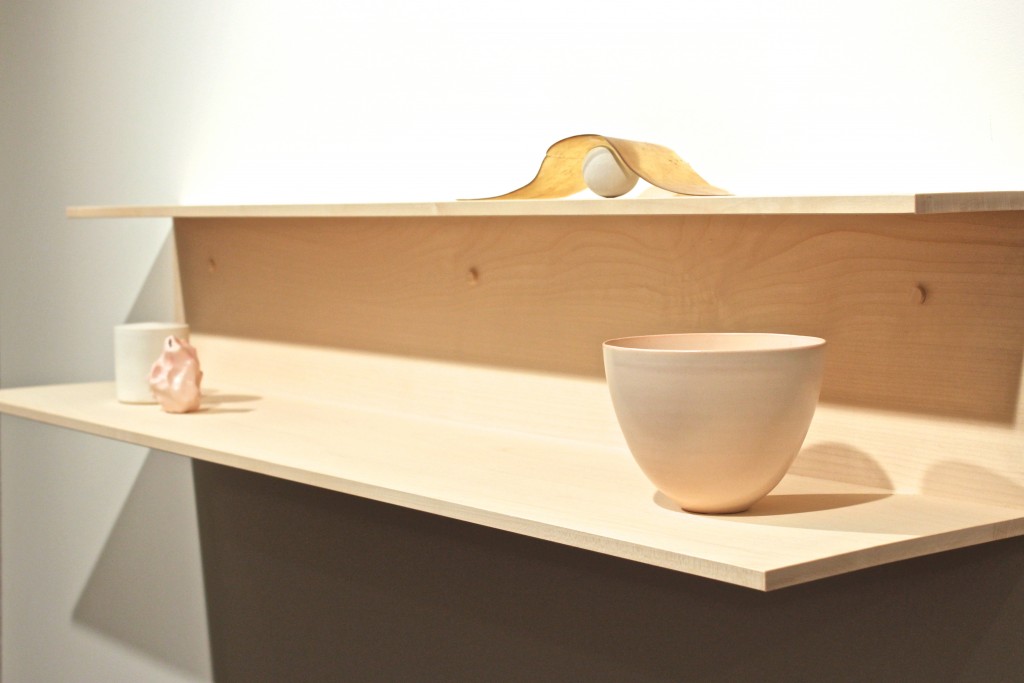 SRS – Coffee (black), French toast, side of bacon + side of fries

There is really nothing I love better than a petite woman who eats like a lumberjack (lumberjane?) – so when Marie decided to order second breakfast, she really locked down whatever piece of my heart wasn’t already hers. It would have been rude for me not to also order second breakfast as well. I am always polite when it comes to eating French fries for the team.

I wanted to grab a meal and chat with Marie for fun and business–I saw her work was included in a group show that just opened at Pewabic—This is the living vessel: person. This is what matters. This is our universe.–curated by (her husband) Anders Ruhwald and I wanted to talk about it. But also, she is simply a joy to talk to–warm and upbeat and worldly. Marie’s work is so subtle; there is the process of making things, but to hear her tell it, the bigger piece of the process is arranging the things. She might spend two months making the objects, but then the rest of the year arranging them. It sounds fiddly, until you see her arrangements, which read as so fundamental that it’s hard to imagine them being any other way.

This piece, which is part of a new exploration on Marie’s part, is comprised, somewhat paradoxically, of very little of ceramic. Marie’s work is so austere and deeply considered, it feels like she is always strengthening her ability to do more with less. It reminds me of aikido masters that can throw an opponent across the room with a twitch of a finger. She didn’t make the shelf, but engaged a woodworker to fabricate it on her behalf, and we talked about the larger arithmetic of when it is better to outsource a process. “I wanted it to disappear,” she says, of the shelf as an artifice, and it makes sense to bring the master skills of a woodworker to bear in a situation where less skilled efforts would be distracting. I’m on the point of needing a piece of metal fabrication done, and much as I love the process of my fledgling welding attempts, I need smoother results than I can create for myself. I feel, sometimes, that the process of outsourcing and fabrication is a dirty little secret of the art world, and unfairly so. Almost nothing in this world is made wholly by one person–as clearly demonstrated by the assembly-line process of automotive manufacturing that is still affects the underlying work ethic of Detroit. Making the labor invisible is, I think, political, and I wonder what perceived cataclysm would come of acknowledging the hand of others in our work?

My conversation with Marie is very much to be continued. I’m planning a visit to the Ceramics Dept. over at CCS, where she is subbing as Head of Department while Tom Phardell is out on sabbatical (exciting news in and of itself). So stay tuned for a material investigation over at CCS, and in the meantime, find a moment to drop in at Pewabic to see the show–about which there is much more to be said. I’ll look forward to hearing if you agree!