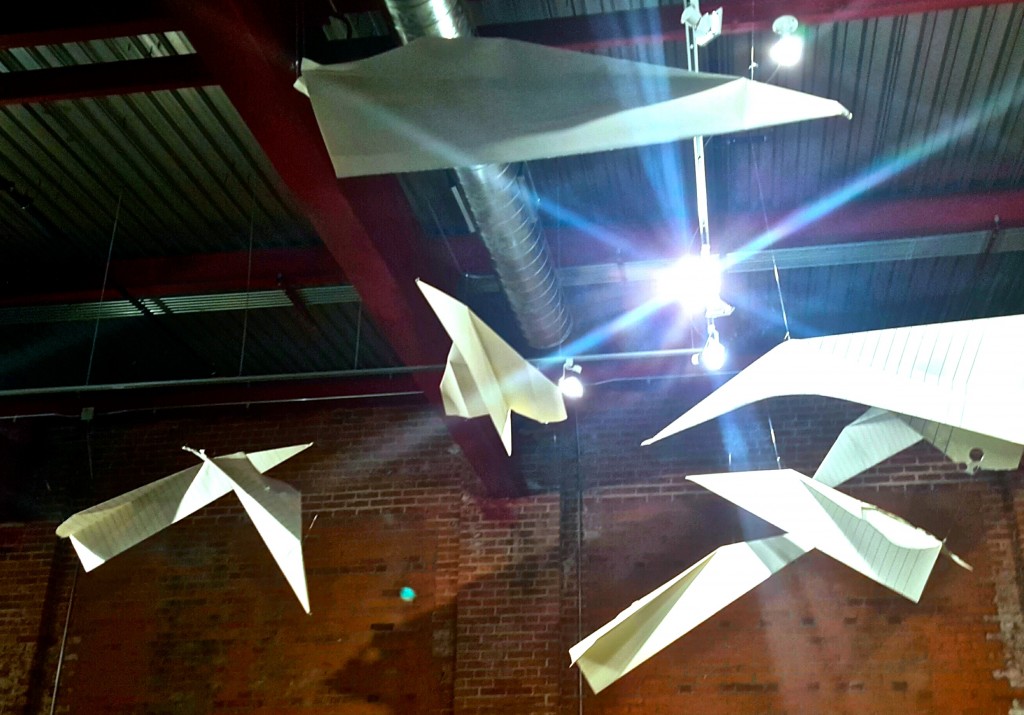 It is with sadness and gratitude that I mark the final event of my year as a Kresge Fellow, though I understand that connections and opportunities will continue to happen on a one-to-one level. The curriculum put together by Creative Many and the KAID staff has been really enriching, and opened my eyes to a number of considerations, as far as ways to make the things I love to do the most be the things I get to do the most.

It was quite the blowout final event, with a three-panel roster last night, at the Wasserman Projects space–I confess to being very distracted by the playful and really beautiful short-run installation by Michael Scoggins. These large-scale replicas of binder paper–giant doodles hung on the walls and massive paper airplanes overhead–are an immediate portal to innocence and childhood, both in subject and scale. Anyway, I wasn’t too distracted to soak up some really fascinating perspectives during the Literary Professionals panel, moderated by Sterling Toles, and featuring 2010 Kresge Fellow Rachel Harkel, poet and performer Jamaal May, Speaker Representative Elaine Trevorrow, and Fence Journal’s Rebecca Wolff. Their words reminded me of a few crucial points that have really become clear to me as this year unfolds:

I don’t know about you, but I actually find that deeply reassuring.

I had to motor out of there before the other panels, sadly, but based on the fact that they included local heroes like Susan Goethel Campbell, Marie T. Hermann, Liza Bielby, and Alison Wong, as well as a coterie of special invited guests, I’m going to hazard a guess that they were excellent. Today was the final brunch for the 2015 Fellows (IT IS TOO SAD TO THINK ABOUT), which took place at the Freer House on Ferry Street. Those familiar with the Smithsonian’s canonical line-up of museums on the Mall in Washington, D.C. surely know about the Freer Gallery there, but I was astonished to learn that this collection was born and raised in Detroit, where Charles Lang Freer lived, supported the arts, and built his visionary art collection for his entire life. His sense of aesthetics, history, and the importance of global, American, and non-Western art at a time when European art was considered the only elevated part of art history is reflected in his collection, which is preserved utterly according to his exacting standards upon donating it.

In fact, I was intrigued to learn that his donation to the Smithsonian (initially rejected, until President Teddy Roosevelt stepped in to insist on his behalf) founded the first national art museum in the nation. Freer was also a major patron of the American painter James Whistler, and I was fascinated to learn that Whistler was a trailblazer in abolishing salon-style hanging in art galleries, giving rise to the spare, eye-level arrangements, natural/indirect lighting conditions, seating areas, and “breathing room” between paintings that remain the convention of modern museums.

Because Freer’s collection of paintings, ceramics, and other art objects has come to rest in Washington, D.C. and never travels from there, it is rarely associated with Detroit, but the Freer House was its first home, and the recovery and preservation of that legacy is clearly a point of passion for Director William S. Colburn, who treated us to a lecture on Freer’s history, and has an astonishing depth of knowledge around this piece of Detroit history. Freer House is stepping up their game in getting the word out, with a garden restoration project in progress, and two upcoming lectures scheduled to take place at the nearby DIA (with house tours to follow). “Cultivating History: Revitalizing Freer’s Detroit Garden” will take place on Sunday, April 3, at 2:00 pm, and “Charles Lang Freer and the Discovery of Korean Ceramics” will take place on May 22, at 2:00 pm.

Thanks Creative Many! Thanks KAID folks! Thanks fellow Fellows. I know this isn’t really the end of anything, but only the beginning; still, it’s as good a time as any to say how much I’ve enjoyed spending time with you. #KAF15 FOR LIFE. Peace out.