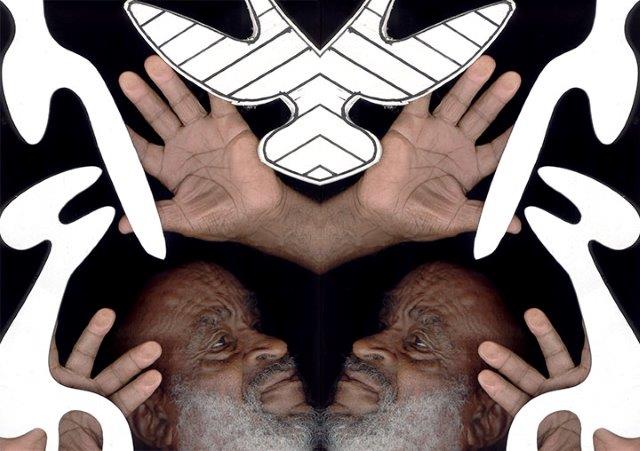 Perhaps the greatest challenge of every portrait photographer is the imperative to capture a subject in a single image. Humans are complex creatures, and the sense that we might be reduced to a single take seems fairly reductionist. How clever, then, that artist Kurt Novak seems to have found a loophole in this conundrum: in 2002 and 2003, he created a portrait series in which his subjects lay on a flatbed scanner, which allowed him to create images of people literally changing over time.

Not a great deal of time, of course–but the time it takes for the device to make its high-resolution sweep of the picture plane is more than enough for an endless array of variations, each suited to match the strong personalities of artists, musicians, writers and collectors among the old guard Detroit art scene. Organized by Sandra Schemske, art collection coordinator for Wayne State University, this collection of works by Novak captures the picture and personality of many big names from Detroit’s lauded Cass Corridor era, largely known to him personally through his involvement in the scene, which unfolded throughout the ’60s and carried through the following decades.

The exhibition, titled “Kurt Novak: Detroit Portraits,” is on display in the three-story atrium space at the Detroit Symphony Orchestra, a Knight Arts grantee. It begins on the main floor with an image of celebrated jazz pianist Henry “Hank” Jones, who worked with a variety of artists, including Ella Fitzgerald, Charlie Parker and Louis Armstrong, and actually accompanied Marilyn Monroe’s famous birthday serenade to John F. Kennedy in 1962. In his portrait, Jones’s fleet fingerwork is illustrated by the inclusion of a third hand—his left hand scans in twice as he plays across the picture plane.