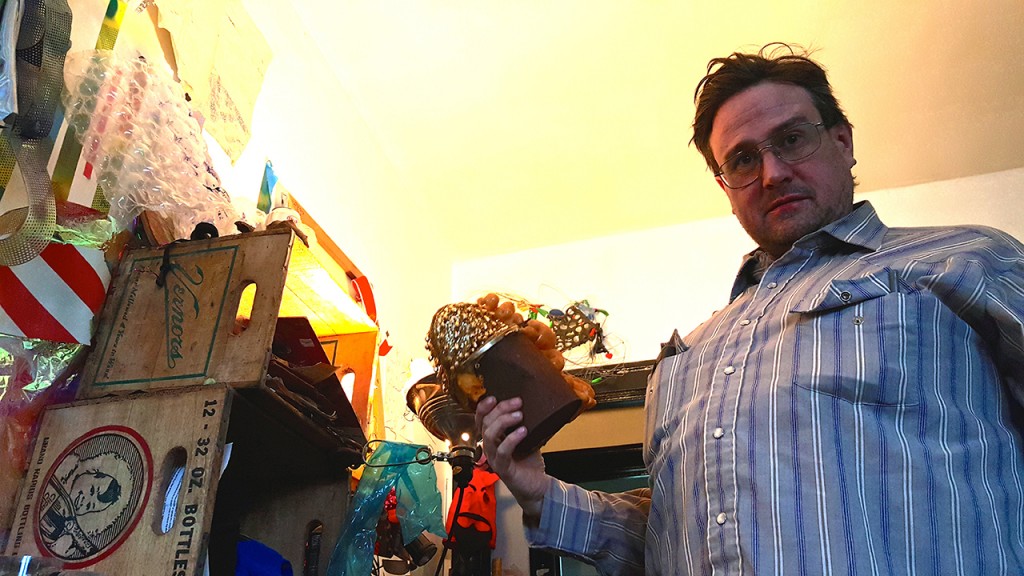 Chris Riddell’s reputation precedes him. There are poet’s poets and athlete’s athletes – Chris is something of an artist’s artist. In the opinion of a whole lot of clever and talented people, he is a genius. In my experience, he’s kind of an elusive character — not cagey, but hard to engage — so I was excited to get a chance to sit down and talk with him, and see some of his work, which has shown just a few times, and mostly piles up around his home-studio on the Carpenter borderland of Hamtramck. For one thing, I can see why people like Chris. He’s very genuine and unreserved, but still tuned into the conversation and adaptable to where it’s going. It seems like he checks in a lot to make sure we’re on the same page — or at least still reading the same book — which is helpful, because we had a pretty far-ranging conversation. Some stuff that we have in common is an affinity for salvage objects, a practice that I think in both our cases is a sort of primal impulse that is later paid off by translating these materials to an art practice. But it’s the stuff that’s really initially compelling, in some way. Chris is a trash-picker, while I tend to favor slightly more curated venues, like estate sales, craigslist, and garage sales. We both have a tendency to deconstruct magazines. Collage is a major medium for Chris, and one of his components is pornography (here, he carefully checks to make sure we’re together on this, that he is not offending me). “I sort of try to take them apart, so they become something different,” he continues, when it’s clear that pornography, at least as a topic of conversation, is not going to send me screaming for the exit.

But somewhere within the salvage process, Chris seems to disconnect with these objects that he feels initially compelled to save. “I should probably throw this out,” he says, referring to a stack of work piled atop a loft shelf — he proudly cites this shelf project as an effort get organized, in a room that borders on hoard (I know hoarding is a stigmatized subject, but it’s something I have done a lot of work with, and feel pretty comfortable around). We’ve moved to his home/studio at this point, and every surface holds stacks of Chris’s work, in various states of progress.

“This isn’t done,” he says, “This is pretty garbagey. This still needs work, this one isn’t done. Here, this one’s done.”

“How do you know when something’s done?” I ask. The difference between done and not-done seems indistinguishable in some cases.

“That’s a good question,” he says, musing. “I guess when I feel like there’s nothing more I can do with it.”

Chris’s work is chaotic. Some collage, some paintings, some found-object sculptures. He seems obsessed with process. Everything he does seems driven in momentary impulses: to garbage-pick materials, to lather canvases with paint, to arrange objects into a “sculpture garden” that sits in a stretch of backyard between the house and the garage, where he also works. There is a work station in his main living room, another in the kitchen, a painting studio in the basement, and another in the garage. I see dozens of works in progress, largely abstracted paintings that are mashups of intersecting planes of colors, out of which Chris sometimes outlines figurative elements. Sort of like cloud-watching in a painted sky. If the mess and uncertainty and chaos of hoarding disturbs you greatly, this environment will probably disturb you. I myself am comfortable with it, and the longer I sit with it and look at Chris’s work, the more it seems that he is working furiously on all fronts to draw (or reflect) some deeper meaning from all the noise around him. I’m not sure where Chris is going, but you can add me to the ranks of people standing behind him. When an artist has such a singular, odd vision and unflagging spirit, there seems little doubt that they are tapping into something both unique and vital, even if only for themselves and their immediate community.