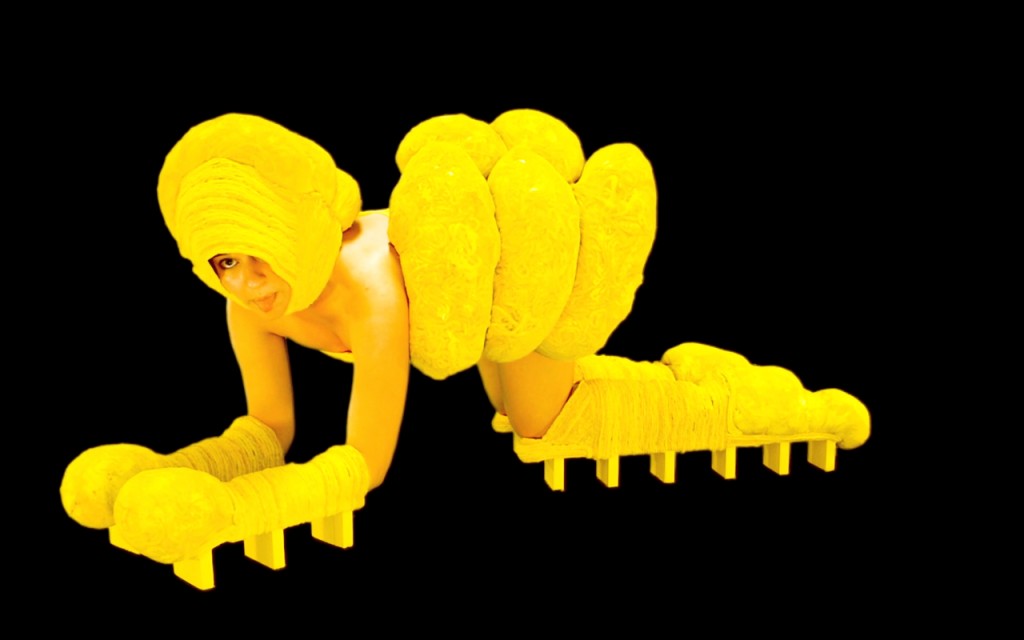 Video still, “Mating Ritual of the Lumpbutt Bouncer” – image by and courtesy of Sidney Mullis

So excited to see that one of my picks for the upcoming Borders show is breaking big in SoHo:

“inti.mate, a solo exhibition by SoVA MFA student Sidney Mullis is on display through May 12 in the Wooster St. Window Gallery at the Leslie Lohman Museum in NYC (SOHO). Investigating notions of gender and sexuality, the show presents performance-based videos of invented animals’ mating rituals. A reception will talk place May 5 at the museum from 6-8 P.M.

In the show, Mullis performs as invented animals to build a domain of alternative biology and culture. Interested in what constitutes “sexy,” Mullis’ video series stems from studying rap music and videos that instruct women how to perform their sex appeal. This media’s lyrics, which is evocative of mating rituals for contemporary culture, often directs women to “push it,” “shake it,” or “wiggle, wiggle, wiggle.”
This proposed kingdom, however, is not suggesting itself as something to be strived for. It is a visual playground to speculate boundaries of gender performance in the present and for the future.

In addition to her solo exhibition, Mullis also has work on display in the International Juried Exhibition Being Her Now: Feminine Identity in the 21st Century on display through March 26 at Salisbury University, MD. The exhibition investigates the role of women in the 21st century, and how we engage in historic ideas of feminism and femininity.

Next on the horizon for Mullis are group exhibitions in Chicago and Ohio. One in Herself is on display March 11 – April 24 at Woman Made Gallery in Chicago.  Juried by Sarah Rose Sharp, who has written for Hyperallergic
and Art in America, Borders will be on display March 4-31 at Owens Center for Fine and Performing Arts and River House Arts in Ohio.”