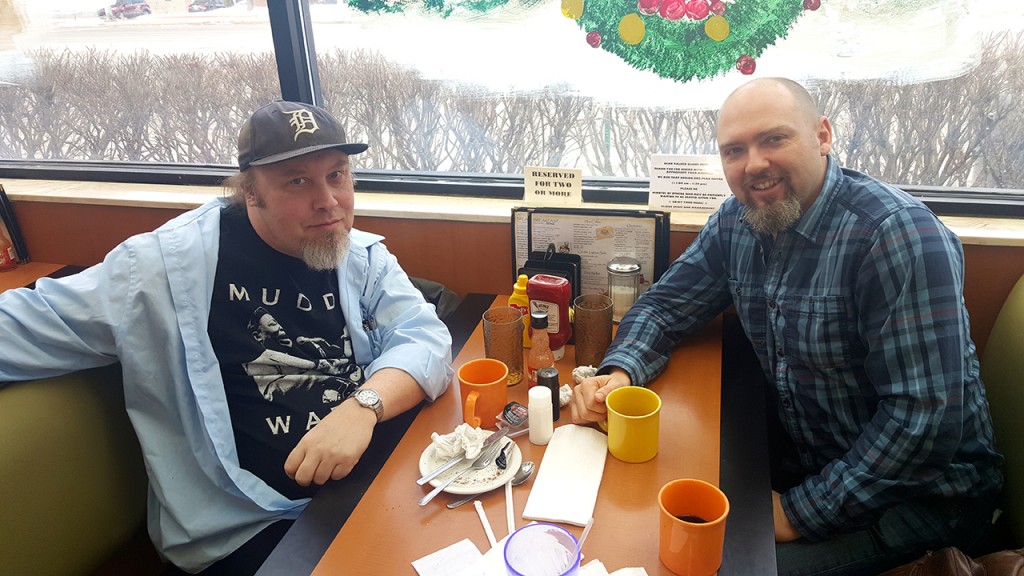 If I had to pick a theme for BWTA this week, it would be the battle of the infrastructure-builders. From the Young World crew, to Ryan Standfest, to Chris Riddell in facilities management, to Michelle Perron, and now the publishing duo Cruel Garters — I’ve been talking all week with people who choose not only to pursue a personal/professional creative practice (in most cases), but also to facilitate the dissemination of creative work in the world, through supportive entities like galleries and small press efforts. A lot of them also have day jobs, including teaching or running their own businesses. A few of them also have kids. Are you exhausted? I’m exhausted, and all I had to do was show up and eat breakfast. Sheesh.

I heard about Cruel Garters by way of Lynn Bennett-Carpenter, who is married to Ben, and also provides the quixotic little cover designs for the Cruel Garters series. She encouraged me to check them out, and having done so, I went so far as to make a submission, which, shockingly, got accepted. I say shockingly not because I am a bad poet, but because CG is extremely tightly curated; each issue has just six poems.

This was the first thing that drew me into the series, actually. Because I love poetry, and read it quite a lot, but find that I can’t really read a lot of it at a time. It is highly distilled language, and acts in the way of other highly distilled substances — it’s strong, and will go straight to my head. So any given book of poetry, especially longer collections, might sit around for weeks or more, as I ponderously work my way through it. CG, though, is a bite-sized amount of poetry, perfect for one sitting — lunchtime or a bus ride (Glen brought up buses no less than four times during breakfast. I sense that it’s A Thing with him). Easy come, easy go, and a $1 apiece, a lot of bang for your buck.

Ben and Glen have carefully considered this thing they’re doing, with seven issues out over the course of roughly two years. The submissions are spare and lyrical, much like Glen’s own poetry (which has a couple solo issues on the CG imprint, including the excellent “The Most Awkward Silence of All”), which is pretty deeply influenced by his roots at U-Mass and the New York school. I managed to name-check James Tate mid-conversation, who Glen actually studied with and knew personally. The idea of a celebrity poet is kind of an oxymoron, but if there were such a thing, James Tate looms pretty large in my mind, at least. He and Ben have a good left-brain/right-brain division of labor between them — Ben’s work is more forensic nonfiction with bonus points for dark themes. Ben has a work on momento mori, and another on Rhetorics of Information — both of which, to my untrained eye, seem to be based in a “Arcades Project”-style accumulation of snippets of information, but thankfully more completely synthesized into analysis than Benjamin’s confounding, unfinished masterwork. Neither of them are willing to take credit for Cruel Garters, fluidly passing responsibility between the two of them, like good Midwesterners.

Actually, quite a lot of breakfast derailed into a discussion of promotional strategies. I’m starting to think I need to organize a lecture series, because if there’s one thing holding back Detroit’s art scene, it’s Midwestern humility. Guys, listen, it is not enough to make great work; you have to let people know what you’re up to. You have to. It’s part of the job. You are not bothering anyone. People want to know what’s going on, because everyone is bored at their job and wants something more interesting to focus on, but they don’t have time to find you, if you insist on metaphorically hiding under a fallen log or at the bottom of a coal mine. You need to put it out there.

Oh sure, you say, I am putting it out there. I am having breakfast with you, and you will tell the people. Yes, now you’re getting it. But I can’t do it all. I have had a lot of breakfast this week, and it’s telling on me. When I hear that Glen has, like, six unpublished manuscripts in the on-deck circle, waiting to get to the plate, it makes me want to stress-eat pancakes. There is great art, great ideas, languishing everywhere, for lack of attention. When you’ve put as much effort into creating something as lovely as Cruel Garters, you owe it to the work to get it into the world.

Speaking of, Cruel Garters #7 is hot off the presses, with plans for a release in the works. If you just can’t wait, you can contact Glen and Ben through their website for your own copy. Go ahead, splurge on a couple back issues, too!