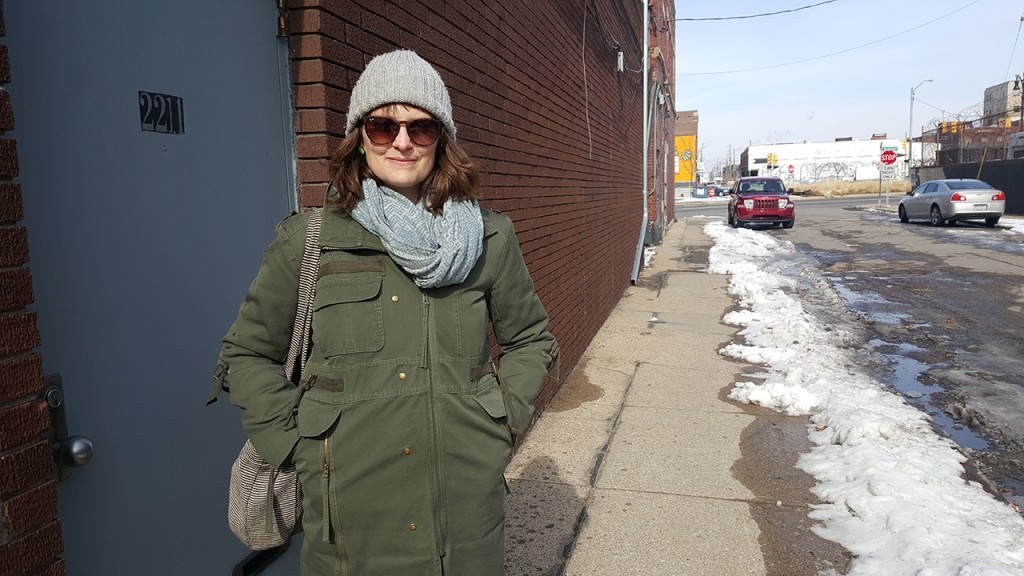 I saw Amy’s work for the first time recently, in Chimera, a two-person show at Popps Packing. And I’m glad she reached out to pursue a BWTA get-together (which, I remind everyone, is an OPEN CALL. You can do this, Detroit. ASK ME TO BREAKFAST, using the shiny button that says “Ask Me to Breakfast”), which ended up covering so many things, none of them technically art. Well, that’s how it goes sometimes. I certainly struggle philosophically, at times, to distinguish where art leaves off and the rest of my life picks up. One thing that stands out from our conversation is how much Amy loves her job in the EMU Art Department. A lot of artists I know that work as teachers struggle to find balance between that incredibly draining occupation and maintenance of a private practice, but Amy seems to really draw a lot of solace and inspiration from her job, her co-workers (“I get to see Corrie [Baldauf] twice a week!”), and the EMU environment. She also seems unflappably upbeat, which is a good quality in a teacher and a new(ish) mom. At breakfast, she dropped the most devastating argument against motherhood I’ve yet to hear (and I collect them) – she can’t eat dairy while breastfeeding, because her son seems to have digestive issues with it. “When I’m done breastfeeding, I’m going to have a feta party,” she says wistfully. Kids, I love you, but not more than sleep and also not more than cheese. Thank god someone is out there, making the big sacrifices so we can have cute little people around.

We also talked about the concept of value proposition. “That sounds like an economics term,” says Amy. It’s more of a marketing terms, I think, and in the context we were discussing, it has to do with situations often being presented in their best light (i.e. what value they offer). Being able to evaluate the potential pros and cons of a given a situation, understanding that almost everything comes with advantages and drawbacks, is an important part of critical thinking. When it comes to making career decisions as an artist — or life decisions like parenting or moving to a new city — it’s always been crucial to me to try to understand what potential the situation holds, good and bad, and work through it before I need to decide. What, me, worry? All the time. But there’s a difference between impotent fretting about things beyond my control, and purposeful consideration of potential scenarios that are within the realm of possibility. I try as much as possibly to focus on the latter, bearing in mind that I am exceptionally prone to the former. Why does this matter? Well, I think at baseline, our brains are designed to push away uncomfortable realities — the most dramatic, of course, being our own mortality. If we really, fully absorbed the implications of our impending demise, it would make it hard to do stuff like get up in the morning, go to a job, pay our phone bill, raise children, and a whole host of other things that feel very purposeful, when you don’t consider them futile. If you detect a trace of irony in my tone here, it’s because I think my personal brain is a little less equipped to ignore harsh realities. Does this make me a bummer? Yep, sometimes. Do I battle constantly against the parts of my mind that suggest that everything is, basically, worthless? Indeed, I do. Is the fact that I may contain faulty brain wiring accounted for in my collection of arguments against (biological) motherhood? Why, yes it is. Because it’s something that I might unfortunately pass along to a kid, along with the obvious benefits of my Scarlett Johansonesque good looks and high SAT scoring potential.

What does this have to do with Amy? Oh gosh, pretty much nothing. We talked a lot about families — that unsteady transition from being the kid, to being the middle generation, to eventually having some kind of decision-making power in the lives of your parents the way they once did in yours. It’s a hard reality to contemplate, and again, one that most people shy away from. Why worry about that? It will happen later. My argument being, I guess, it will probably go better later if you think about it a little bit now, and ideally discuss it with the people who will be on the receiving end of those decisions. It’s actually a lot easier, at every stage in life, to get where you’re going, if you know what it looks like. Hey, it was great talking to Amy, and I’m looking forward to our next conversation already, which will hopefully include a more detailed focus on her fascinating multi-layered collage-paintings. I have helpfully peppered a few images of those in here, just so you have something to think about besides impending doom. Don’t worry! I have it on good authority that everything turns out fine, in the end.

Until then next time, don’t forget about this: