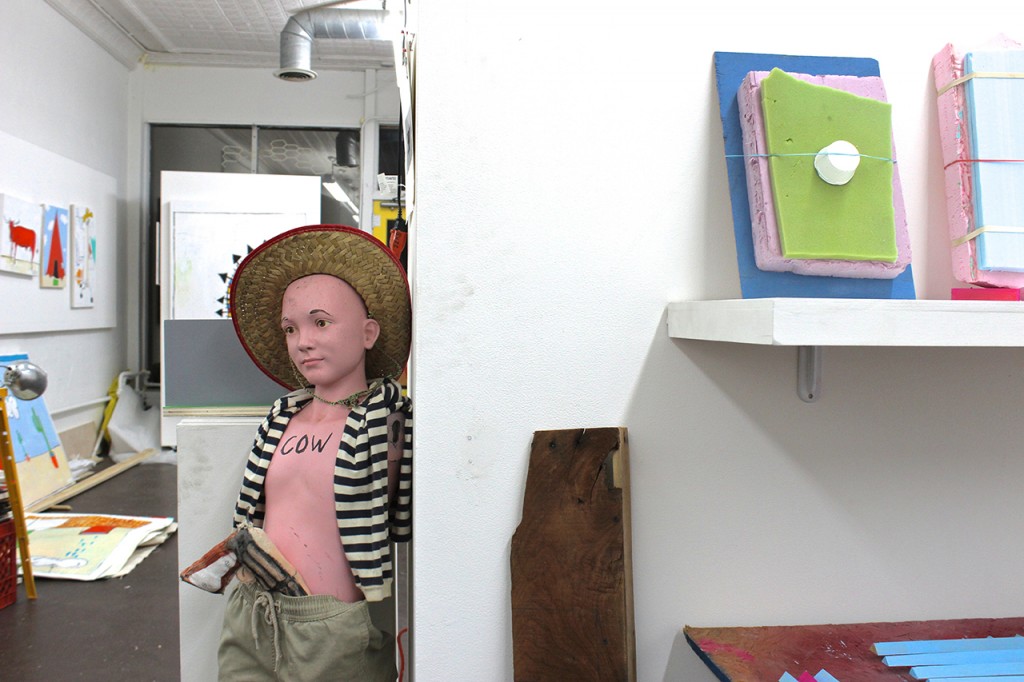 During the off-season at BUTTER Projects — the experimental Royal Oak gallery space managed by John Charnota and his wife, Alison Wong (who was slyly poached by Wasserman Projects to act as the inaugural Director for it’s Detroit re-opening) — a two-man studio extravaganza has sprung up in the place of regular shows. On one side of the space, John is engaged in an investigation of building materials, sparked by a home repair requiring quick-set cement. Construction materials, including cement castings of water bottles and other plastic containers, packing foam in an array of oddly pastel shades, and scraps of wood are being grouped into unexpectedly formal arrangements, often held together by rubber bands in complimentary shades. A sweeping glance at John’s workspace suggests to the eye a play table — the basic shapes divorced from their original purpose are reduced to chunks of design in chalky colors, very much like children’s toys. On the other side of the gallery, Alex has set up shop, working to push his constant obsession with cowboy motifs into greater abstraction. Moving from paper to canvas has yielded some promising results, with his imagery moving into larger scale, and taking on a process of erasure, with Alex whiting-over many composition elements in a given piece. Some of the finished pieces suggest Francis Bacon, Willem De Kooning, in their palpable desire to eliminate all but the most necessary component of a given scene. Alex’s established reductionist symbol set is prominent, as usual — (red) cowboy boots, Little Prince-esque cowboy hat, cartoony three-prong cactus, an assortment of sterotypical Indian artifacts like arrows, headdress, teepee — but now there’s a new addition: the ubiquitous presence of a pylon orange Home Depot bucket. This modern interloper seems to draw in a more contemporary theme of prototypical masculinity — much like the Wild West, Home Depot typically sidelines female characters, acting as a stage for male posturing and identity. This examination of maleness in Alex’s work is breaking down to very elemental forms as he redacts his background features, and there is again a suggestion of something childlike in its execution. The bold outlines around many of his subjects hints at flickering, old-school animation, and many of his humorous little object sculptures feature actual toys, reclaimed from cheap cowboys-and-indians playsets. I hope it doesn’t sound patronizing to say, Alex and John — who seem to be primary interlocuters these days — also have a really sweet fraternal kind of friendship, that speaks much more to young boys, still permitted to have emotions and express themselves creatively at play, than to older males, who have bought into the competitive hierarchy for mates, or mastodon hunting rights, or whatever. It is a particularly secure kind of masculinity, I think, that allows for serious work with pastel bricks of foam, or playing cowboy. Worthy of respect. Fun times, out on the range, with John and Alex. BUTTER Projects will pick up its next official programming toward the end of March, so one imagines that Alex will be packing up his new body of work and heading on down the ol’ dusty trail. Where will it end up? I look forward to seeing it find an exhibition space.