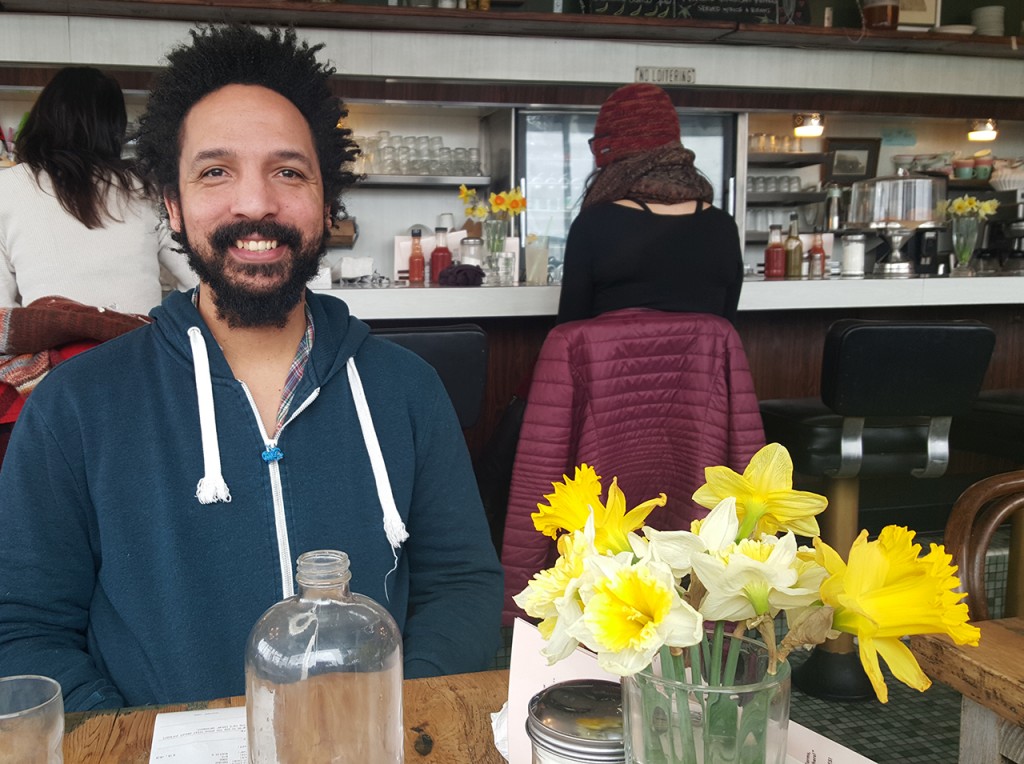 First of all, PEACE OUT, FEBRUARY. Seriously, screw that month. There could be no greater way to clear the winter doldrums than this March 1 confab with the fabulous Billy Mark. The man radiates inner peace.

Basically the first thing that happened was, we both wanted to order the same thing on the menu. I mean, it looked SO good. And that’s always awkward, right? That’s against the rules of dining. SAYS WHO, SAYS WE. It was a good kickoff to our conversation, reminding us to remain unbound by arbitrary concepts and social practices that bind us to discontent in a million low-stakes ways. How can you even tackle the big stuff, if you are too scared to order Bang-Bang Breakfast Rice, for chrissake?

We also talked a LOT about appropriation, because I rounded out February by stepping in the ring with a “reactor” piece on the issue of artist Ryan Mendoza’s White House project. And let me say, I can count on basically one hand the truly negative reviews I have put into the world. I really don’t believe in leveling negative criticism, as a rule — I mostly ignore stuff that is not to my liking. It’s really only something I bring into play when I feel there is a willful (or unconscious) malignant side effect to a person’s actions. And in the case of this piece, I’m not even really dealing with the art, so much as the social practice of coming to Detroit and just taking whatever you want away with you. There’s been much dissent over the piece, from Detroiters and non-Detroiters alike, and in the way of the internet it is easy to cast aspersions and make assumptions. I don’t like putting negative work into the world, as a rule, because I find it brings negativity right back atcha. As Billy will agree, we all have a dark side. There’s a Dark Rosie, and she hates pretty much everything. I try to keep that wolf in her cage, and feed the other one. But in defense of something? I might let that dark side get the best of me.

And Billy had some ASTOUNDING perspective on this subject. “Can we discuss the merits of appropriation?” he wanted to know. Well, okay. I guess appropriation is good because it’s a way of stealing work or capital from other people, right? So, very efficient! Sort of like racism is a terrifically efficient way to make judgments about people without getting to know them! Wait, why are we doing this again? Because, Billy says, we have to relate to these things in order to overcome them with love. We can’t love what we don’t understand. The current political climate is bringing all kinds of people to the forefront that are hard to love, to say the least, but Billy’s determination to find a way really takes my breath away.

“Theater teaches us that villains — no one thinks they are the ‘bad guy,” Billy explains. “So if you’re going to write those characters, you have to find their humanity. They think they are doing the right thing.”

That’s right. And if you’re going to connect with that, you need to see where they’re coming from — because people can have bad ideas, and it’s okay to challenge those ideas, but nobody is going to remain in conversation with someone who think they’re a bad person. They know they’re not, for sure.

“But the work I do is a mechanism to bring art and people closer together,” I say.

“Yes, but how do we get closer to people who are working to tear people apart?” says Billy. BANG BANG.

Credit in the art world is such a sticky thing. Most creative work comes out of collaboration — especially in performing arts, like theater, which Billy is into. How to establish who is responsible for what? How to divide that credit? Billy is tired of that game, and I don’t blame him. What would it cost you to acknowledge someone else’s role in your work? Wouldn’t it just be a hand up for everyone? I think something Billy and I both appreciate about coming to Detroit — he from Los Angeles, and me from New York — is that it is less combative and more collaborative than either of those places. But you have to repay that spirit of collaboration by recognizing all the people who contribute to a given thing happening — and there’s not much that happens in this town without a lot of support from a lot of people. I run into this often with pieces I send out for publications, have had editors tell me I name-check and link too many people that are seemingly unrelated. Had them suggest I cut back on it, it is distracting. And I’ve said, with all due respect, that if they want to cut that information, it is of course their prerogative, but it’s within my values to try and give credit where credit is due, and I will not stop including it. I’m sorry if that’s confusing for people. It seems like the least I can do.

Oh man, this was just the tip of the iceberg. I told Billy, I’m hoping to martial some resources to make BWTA a podcast, and if I can get it together, I hope he’ll be willing to go another round. He comes at all things: art, haters, and breakfast, full of love and open to possibility. It makes for a genuinely lovely conversation, and I want that voice where everyone can hear it.