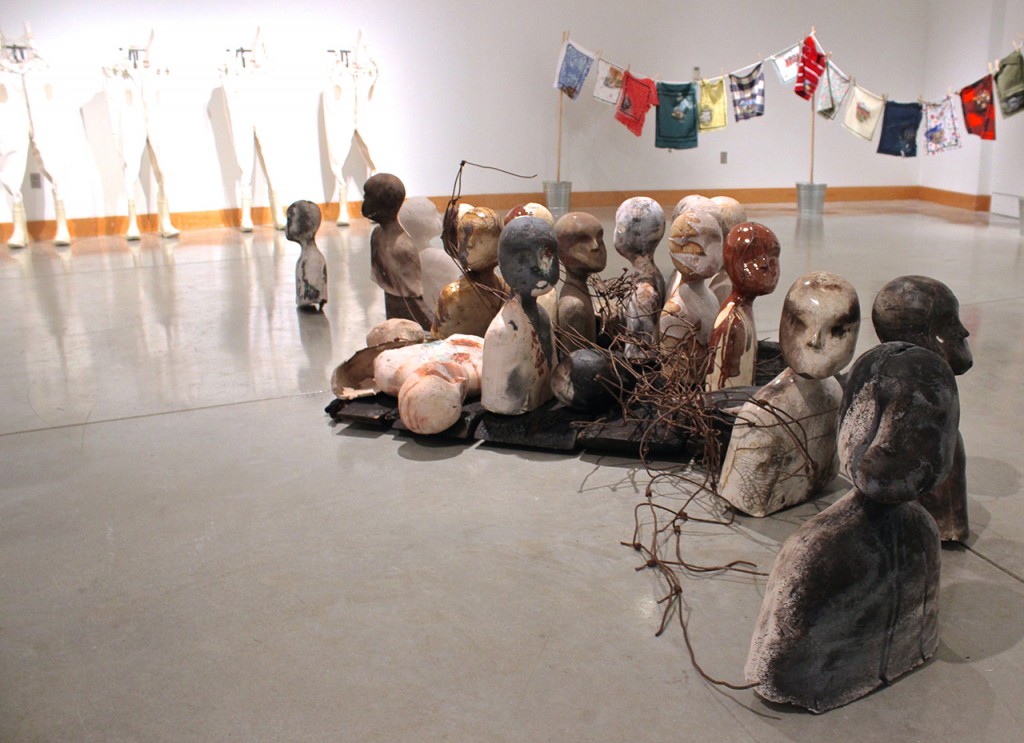 Last night was the opening for Borders – not just the first show that I’ve ever guest juried, also the best! Much appreciation to the Owens Community College Center for Fine and Performing Arts, for their beautiful facility and their efforts to show art here. I’ve really had a great time getting to know Perrysburg and Toledo, and want to thank Exhibition Manager Paula Baldoni of River House Arts for inviting me to guest curate, and for her openness in building a process together with me. I was really excited to get to see all the submissions, and it was both an honor and a terrible, terrible task to have to choose between them. Thank you to all the artists who participated – I know putting yourself out there is sometimes the hardest part of the practice, and whether you made the show or not, I hope you benefited from the opportunity to attempt to summarize and present your work for consideration. I’d like to take a minute to talk more broadly about the show’s theme, “Borders.” It’s one of those concepts that is so wide-open as to risk meaninglessness, and in curating the show, it seemed to me the imperative was to put together work that presented a strong vision of borders in the context of this show. What seemed to emerge, looking at the work, were pieces that made bold challenges to one of the oldest divisions – that of gender and sexual identity. If I had to pick a mascot for the show, it would be the video works by Sidney Mullis on the screen just outside the gallery’s main entrance, which enact mating rituals for creatures of her own imagining. They are playful, they are colorful, and they are wielding sexuality in a conscious way – all things that I look for (in art and in people ; ) and qualities that you will see repeated throughout the show. These are also words I would use to describe the video installation work by Laurenn McCubbin, who is our first-place winner. I encourage you to take a moment with the locker which she created doing intensive investigative work in Las Vegas, if you get a chance — see how it feels to look into that space and be seen by it. If those works are colorful, playful, and wielding sexuality, the two works by Kathryn Shinko, who is our third place finisher, are perhaps a little off-color, a bit hyper-sexual, and playing a grown-up game. Dirty Sampler Series: iv tastd u; how bout u riding me by Kathryn Shinko

I have a background in fiber art, and you will see a decided skew in that direction – there was an embarrassment of riches, as far as profoundly interesting and well-executed fiber-based works. I think it’s one of those odd twists in the art world hierarchy that fiber art has historically been considered a minor medium. Paintings, which are (mostly) applied to fabric, hold high honor as art objects—but other kinds of fiber works get relegated to characterization as domestic crafts. Might have something to do with those tricky gender divisions, do you think? Whatever the reason, there are a few pieces in the show that really examine what a painting is—here I’m thinking of Prayer Flags for Detroit by Whitney Sage. These little portraits of Detroit buildings on salvaged domestic fabrics seem to me to thread a path between the domestic qualities of laundry on the line, and every painting that has ever been set to canvas. They also, as the title suggests, are flags, which speak to a very personal kind of representation as well as collective identity. Flags happen to be of interest to me, and you’ll see another pair of them – two coat-of-arms style works by mythic priestess Mary Fortuna, who never fails to raise the bar or adopt a new method in her investigation of a powerful, universal symbol set. I find it appropriate that she ended up back-to-back with Mary Mazziotti, who has taken self-portraiture in a direction that I find quite breathtaking. There is also some work dealing with borders of a more geographic and more political kind – I think it’s hard to avoid the subject of politics these days, and while I don’t mean to darken the mood with any ranting on the subject, I do feel that its crucial that we take time to really consider that every other person in the world is as much of a person as we are. If it’s too hard to consider that in relation to the six billion people on the planet, just try for a moment to shrink it down to the people in the room – every one of us has a rich interior life, a set of hopes, and a hierarchy of basic needs, and none of us are actually more important than any other, when it comes to have those needs met. I could not look at the beautiful ceramic submission by Maureen Joyce (see above) without thinking about the Syrian refugee crisis, and between that and her dramatic execution, I could not help but include it. Likewise, the map on the outer wall by Zach Lihatsh of recovered human remains deals with a chapter of history and American identity that is not, perhaps, our proudest – but it is the kind of wound that will not heal by being ignored. Likewise, the works by David Cuatlacuatl, which are thoughtful in execution and also materially quite wonderful, and Yusuf Lateef are both looking directly at things from which a lot of people would and do choose to look away. Another reality we would just as soon ignore is the space between life and death – and that’s why the quiet and really lovely works by Jessica Tenbusch – our second place awardee – are so striking, in my mind. Why bother with any of this? I’m serious. There is a lot to do in our busy lives, why are we going to bother to come to an art gallery and look at work that might challenge us – or not, it might bore us, or anger us, seem funny, or just feel confusing. It seems to me to be a deeply fraught time, politically, in our country. There are incredible divisions in perspective, and the borders between right and wrong, or Right and Left, seem to be widening. I’m not here to stump or to advocate for any candidate, but only to say, art is a process that facilitates critical thinking, and without critical thinking, we are lost as a society. There are no easy answers in good art, and unfortunately there are rarely easy answers in life. The only way to know the right thing to do is to think about it, discover challenges, anger, and hope, and work through it until you arrive at a conclusion you can sit with. Art is a way to practice thinking, to practice being uncomfortable with an idea, and to learn how to withstand that feeling and get to a different place with it. Art objects are vessels for ideas, and without ideas, we become a mindless populace at the whim of systems that do not care what happens to us. So let’s celebrate some of the ideas on display tonight, whether we like them or hate them – let’s embrace them as an opportunity to exercise our ability to consider them. I hope I haven’t given too much away in my opening remarks, because the real joy of art, in my experience, is getting to form your own relationship with it. Tonight, and anytime you encounter art, I encourage you to do whatever it may take to resolve these ideas and objects for yourself—you don’t have to take anyone else’s word for it (not even mine). On a final note, I was especially gratified by the large number of female applicants and participants, and thrilled to get to show their work here. I see you, ladies! You are so good at art!! Thank you everyone, who contributed to the show and came out for the opening! I hope you enjoy the show as much as I have enjoyed getting to put it together.