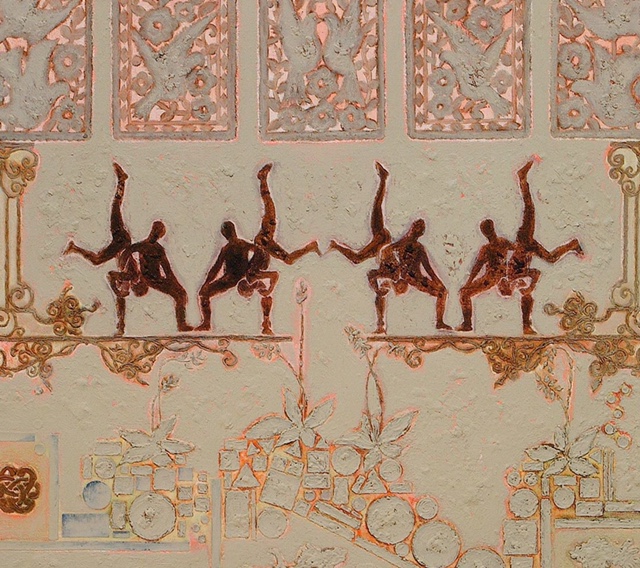 I was impressed with Valerie Parks before I even met her, because she’s one of the few people who did the thing I’ve been encouraging people to do – invite me to breakfast without knowing me first. The whole idea of BWTA is to encourage open access and discussion around art-making in Detroit, because I don’t know who I don’t know, you feel me? There are a lot of you.

Then I was impressed with Valerie Parks again, as soon as I did meet her, because she is a warm and funny person, with a very honed perception of her lifelong work as a painter. This is rarer than you might think. A lot of artists I talk to (and not to point fingers, but especially painters) are so preoccupied in making the work that they avoid the sometimes truly difficult questions of why they are making the work, and what it’s about. Valerie got over that after the first 15 years or so. “My work is about where you can go, and where you can’t go,” she says — citing the turning point moment during a tour of the churches of Florence, where she encountered the late Medieval feature of the rood screen. This screen divided the hoi polloi and commoners from the parishioners of wealthier classes. It came clearly into focus for Valerie that her work was constantly exploring issues of access — indeed, social mobility and division is a time-honored theme for art across many media. There, that wasn’t so hard, was it? Another thing she left behind was the ambition to engage in the cutthroat ladder-climbing that is a necessity for success in the art world. At least, this is what we’re given to understand. Only a tiny portion of people can “really succeed” as artists — the opportunities are few and the applicants are many. Only the strongest survive. Hmmm, that sounds awful. I can understand why a lot of people would opt out. I had a realization, in dealing with a colleague in another professional arena, who seemed very divisive, always manipulating situations and being disingenuous. It made her hard to work with, because, while I’m capable of that kind of behavior (beware Dark Rosie), it is not my natural state, and it costs me energy. Why would she behave that way? Isn’t it exhausting? Well, maybe not for everyone. There are people who draw energy from competition, manipulation, feeling in control. The absolute last thing I want is to be in control of anyone. I’m not interested in telling you what to do with you life or making you a pawn in what I’m trying to do with mine. Stay in your own goddamn lane, and we’ll probably all get where we’re going.

Valerie also wanted to talk about visibility — she hears a lot, from women in their 60s, that they feel invisible. Certainly better feminist minds than mine could outline all the reasons that women, having exited their fertility windows and being discharged of their most immediate mothering duties, seem to be collectively disregarded by society. But Valerie has found a loophole! Her voice, she thinks, is never really silenced, because she makes art — that is an ongoing conversation with herself. She can set ideas down and in doing so, be assured that she has them, regardless of who else is listening.

But of course, someone is listening. Over decades of working in the arts — as a drawing instructor at DIA’s Studio/Education Department; as co-owner of TravelArt Services, one of Detroit’s premier art-handling businesses; as a Board Member for arts groups including Center Galleries Advisory — Valerie has developed relationships all over the spectrum, with artists, gallerists, collectors, New Yorkers. She holds her female artist friends especially dear — sane and healthy women tend to travel in packs, I have found.

It seems that, despite having experienced some early success, Valerie understands that competing for visibility and attention was not, ultimately, as important to her as making the work — a choice I see was made often by a whole generation of Detroit artists. Internet culture has bred a newer generation for whom, I think, the idea that you would do something and not receive attention for it is anathema. Or at least nonsensical. But a lot of folks in Detroit value their process, their privacy, the space they’ve carved out for themselves. That’s why it takes a while to get to know all the players here. You have to sit quietly and see who emerges to finally ask you to breakfast.