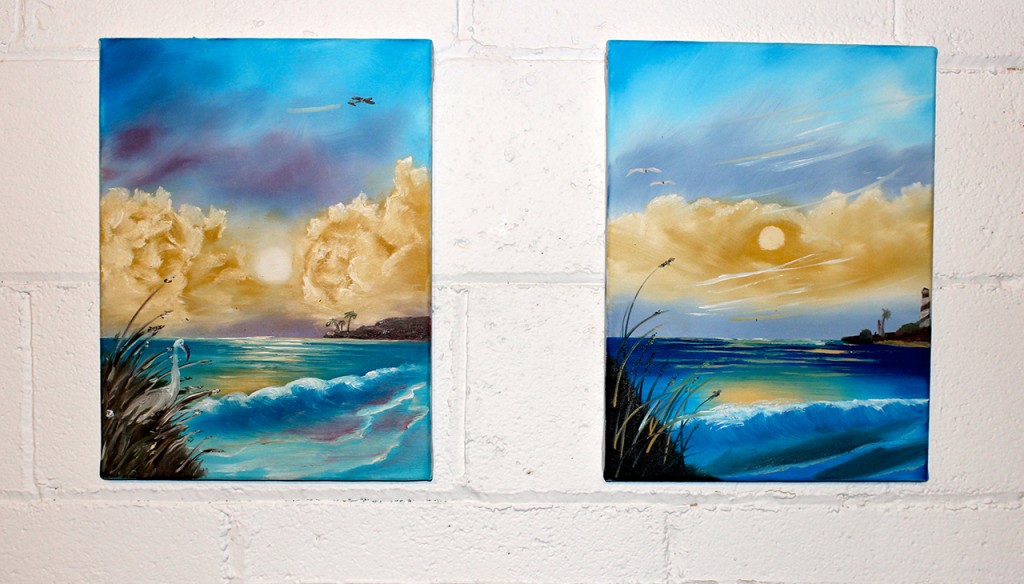 DETROIT — Painter and art instructor Bob Ross, host of the legendary public access show The Joy of Painting, was known to say, “There is no such thing as a mistake, only happy accidents.” Proponents of synchronicity and/or fatalism would say there is no such thing as coincidence, only signs of a higher order to the universe. These two philosophies have found a playful intersection in a collaboration between artists Henry Crissman and Hamilton Poe, on display in the multiuse art cafe Trinosophes.

Self-Titled 2: (954)785-8492.5 is, as the title would suggest, Crissman and Poe’s second project together. The two initially met under circumstances detailed thusly by Poe, in materials from their 2013 series Self-Titled: Collaborative Projects by Henry Crissman and Hamilton Poe:

Long before I met Henry, I was given this t-shirt, which was stolen from him by a girl when he was a freshman at CCS. When I was riding my bicycle [to Detroit] from Vermont … I ran into the girl in the Adirondacks as she pedaled to Maine. Arriving in Detroit, she gave me all of her clothes as she departed for [Canada]. I’d always assumed that I’d run into her jealous boyfriend one day, but instead found myself over at Henry’s house a month ago, working on an art project, and having him tell me about how he once had the same shirt.

Not ones to let such an auspicious happenstance pass them by, Crissman and Poe formed their first collaborative effort. The second body of work was likewise sparked by a chance occurrence — when Poe and Crissman spontaneously called each other at the same time, resulting in a phone connection without a ringtone on either end.