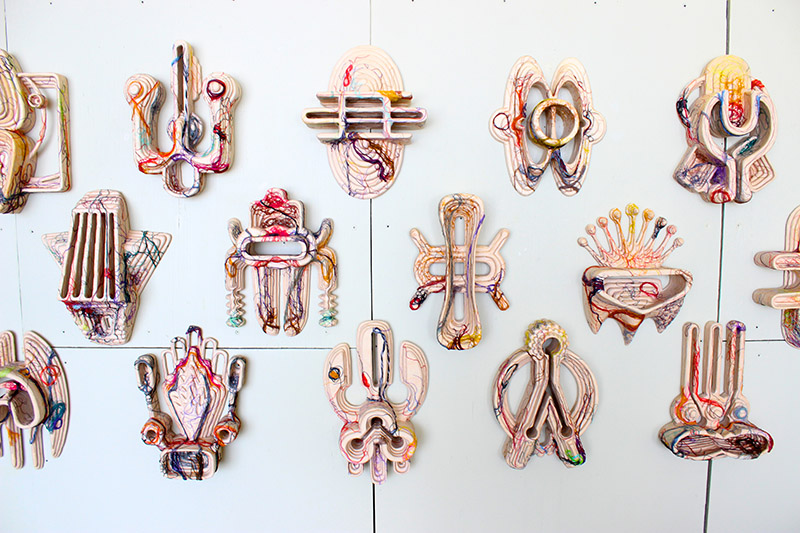 Walking into Robert Mirek’s studio space on 9 mile, where he has been working for 15 years, is like walking into the offices of the anthropologist of a forgotten world. Atlantis, maybe — there is something very undersea/advanced civilization/alien language about the proliferation of art, reference materials, and found objects in his suspiciously tidy front room and workshop. In finished form, these sometimes manifest as sculptural symbol sets in series, which have a hieroglyphic or linguistic feel — it came as no surprise to me to hear that Robert made a living for a long while as a graphic designer. The collections of symbols, with common materials but variations on shape, imply language and invite decryption (though Robert says they are not literal letters). And while computer-assisted design plays a big role in the design process, they are cut, routed, and finished entirely by hand, giving them a crafted feel that saves them from being clinical. His most recent body of work, Threads (pictured above), is bare wood, with surface details in multi-colored thread. These shapes suggest architectural models, accounting not only for buildings, but the spaces between them — parks or green spaces, in Robert’s mind — and the threads suggesting an overlay of city infrastructure, such as transportation lines or utilities. It’s an interesting way of incorporating architecture and design principles into work that is still firmly sculptural. These are a stripped down iteration of a previous symbol series, Strands, which began with wooden shapes, but finished with a layer of moldable, rough, pumice acrylic, the insets filled with broken safety glass in a matrix of eerie green epoxy resin. While Threads look like the product of an advanced future society, the crude and vaguely asymmetrical Strands look like an artifact of a very advanced fallen society of the past (or myth). I spotted several books on the architecture of Antoni Gaudí, whose architectural triumphs of structure, decorative excess, and alien oddity are a clear point of inspiration for Robert. I also was reminded of Ernst Haekel’s Kunstformen der Natur — and indeed, a scrap of one of his fanciful taxonomies of natural forms is tacked amid a collage of reference materials on Robert’s drawing board. Robert draws from a vast library of source material, both visual and philosophical; I found myself somehow leaving with an armful of books, following an exchange of thought that will continue through many happy reading hours (books are catnip for writers, we cannot resist). Tucked behind a freestanding bookcase of reference materials in the main room is a wall of “transition” pieces — that is, the pieces where Robert discovered something that would give rise to a new body of work. I really love that the working-it-out pieces — not polished, not for show, but crucial to the working process of most any artist — have their own special place in Robert’s studio. It shows how important he knows them to be. It’s a subject I’ve discussed repeatedly with Corrie Baldauf — there’s an entire book she likes a great deal that collects works like these, though I don’t know its name (anyone?)… This is kind of just the tip of the iceberg for Robert — I spotted at least three more distinct bodies of work up in the mix of his shop. There are found object pieces, which he refers to as “palette cleansers,” which might incorporate materials ranging from plastic elephant toys to bits of an abandoned paper wasp nest (architecture!). There are Totems, an early body of work of symbol sets in thin sheet aluminum and rubbery black line detailing. There is the Scorched series, swooshy, cellular molded wall pieces that began by pouring paint into carved-out spaces and displaying the resulting paint layer in a frame, until they jumped the frame, toned down the palette, and were given a meticulous backdrop that look like skin cells under a microscope — in reality, hundreds of tiny, hand-drawn details on tracing paper, glued in place by Robert. He seems very nice for an insane person. Even Robert’s wood scraps from all the intended art pieces have begun to grow into a piece of their own. Here, the archaeological nature of his work reaches perhaps its most acute point. When finished, the work becomes a hanging wall structures comprised of hundreds of little pieces of scrap wood; in progress, it looks like nothing so much as a scale model of the Wailing Wall, or the facade of an ancient ruin (or, again, a Gaudí building). As any fan of Ernst Haekel will tell you, there is much aesthetic pleasure to be gained from imagined taxonomy — just like the best science fiction, whether or not they represent the world faithfully, they open possibilities and offer a vantage point on reality that is fascinating and powerful. Kudos to Robert for his meticulous and dedicated process and his gentle and engaging presence. I think the aliens really picked the right ambassador to carry forward their ideas.

Tell me more, you say? You’ll be pleased to know that Robert has an installation of quite a bit of work in a solo pop-up at the Detroit Center for Design + Technology that has been extended through March 25, is in an upcoming three-person show which opens on April 8 at Gallerie Camille. So you can ask him yourself!