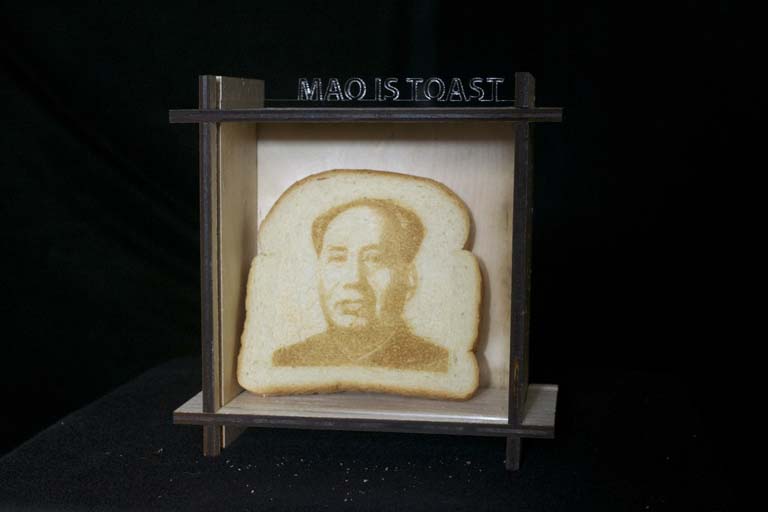 Who is famous enough to be memorialized on a piece of toast? That’s the simple starting point of 100 Wonderbreads of the World, an ongoing work by artist, educator, and activist Kyle Lane-McKinley, which is on display as part of In Conversation, a show of UC Santa Cruz Art Faculty work curated by Shelby Graham at the R. Blitzer Gallery. Anyone casually familiar with Lane-McKinley will know him to be a deep thinker with a keen awareness of intersections between art, society, media culture, technology, and politics. 100 Wonderbreads, which features an ever-growing collection of iconic portraits laser-etched onto pieces of dried Wonder Bread, is perhaps less connected than some of Lane-McKinley’s other work to issues of social justice — such as the Objects Projects, created in collaboration with artist-activist Cheyanne Epps, which charts incidents of police shooting citizens after mistaking commonplace objects for weapons. But scratch the inarguably playful surface of 100 Wonderbreads of the World and you’ll nonetheless find plenty of consideration paid to this carbohydrate canon of personalities.

“When my friends and I first got access to a laser cutter in 2010 or so, the idea of etching the image of Jesus into toast was one of the first things we joked around about,” said Lane-McKinley, via email. The project obviously references the tabloidesque revelation of visions of holy figures discovered in toast, water stains, or other everyday materials.

The joke centers on the ease with which, using this crazy machine, one can create this object which previously appeared as downright miraculous. We weren’t initially particularly concerned with whose likeness was etched on the toast, just that the image was iconic enough to be easily recognized — and, of course, in order for the joke to work, the person has to be dead. Now I’m much more interested in who is included, but not in the sense of who the person was in their lifetime, so much as how their image circulates as a commodity in their death.