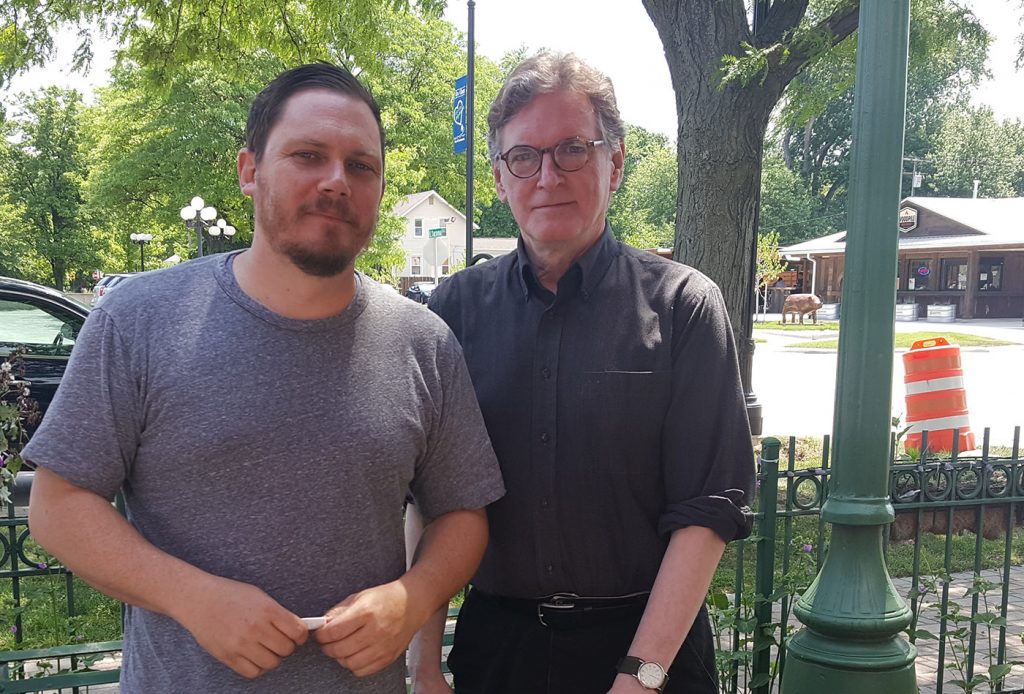 ME – Lemonade, cinnamon French Toast, side of bacon

I should take a moment to mention that this meet-up was facilitated by art historian Jessica Hopkins, who brought us together and attempted to do a little eavesdropping on the conversation while she was working her shift at Frittata. I regret not getting to talk more with her. Thanks, Jessica!

I suppose it is a common aspect of human nature that people like to neatly categorize other people. We are apt to think of ourselves as complex creatures with myriad interests, but when it comes to other people, it is so much easier to find their most obvious outstanding quality, and use it to define them completely. Such is the plight of the curator-artist, and I had an opportunity for breakfast with two of them. Matt Eaton is extremely well known in Detroit for his curatorial efforts at Red Bull House of Art and Library Street Collective (in addition to a host of side projects – the guy is basically an organizational juggernaut); Jef Bourgeau is a lifelong Detroiter and artist, whose own art career has perhaps been slightly eclipsed by his organizational efforts on behalf of MONA – Museum of New Art – which dubs itself, “Detroit’s Contemporary Museum since 1996.”

All these organizations have a strong aesthetic, and it’s clear how much energy and dedication Matt and Jef have devoted to their respective establishments. As an artist who is primarily known for writing about art, I can well relate to the feeling of spending a great deal of energy on facilitating other people’s art, all the while nourishing some small kernel of hope that somewhere out there is someone who might give a tiny fuck that I also have a creative and expressive side to my existence. Matt and Jef have found a tidy solution to this conundrum, and are co-curating each other’s work in a two-person show coming up at Galerie Camillie in July (opens on the 15th). Clever!

Dubbed Intersections the show’s theme focuses on the common ground between the two, which has to do with interplay of lines. Matt’s work is very graphic, which makes sense in the context of his modern sensibilities and, based on his curatorial efforts, his areas of aesthetic interest: graphic design, youthful energy, advertising, street art skills in a fine art context, promotion/hype, common subject/rarefied setting. Jef’s work likewise suggests some of the hallmarks of MONA’s repertoire: experimentation, counter-culture, formalism, replication, implications of media, art history and the disruption thereof, tight experimental palettes – and his past work has included something called “Zombie Formalism” which sounds right up my alley. It’s interesting to me that some of what clearly interests Matt and Jef, respectively, comes across in their curatorial style as much as their own artwork. Heartening, perhaps, to think that when you’re an artist, it is so fundamental to your nature that it’s going to inform whatever it is you do with your time. I have drawn a lot of solace, at times when I could not explicitly devote myself to formal art-making, in realizing that my creative energies were rerouting themselves to manifest in aspects of my everyday routine – meal preparation, outfit selection, home decor. When I’m deeply enmeshed in creative work, all those things fall by the wayside; I basically wander around wearing the same clothing for days at a time, eating entire cucumbers or whatever else is lying around, and letting objects arrange themselves into chaos. Maybe art is a little like praying without ceasing – it is the background hum to all that a true artist endeavors to do.

That said, if there’s a PSA for today’s breakfast, it’s to take a moment to reflect on the people in your life – especially those who form some indispensable part of your support network – and think about whether they might need something from you. It is a common, and perhaps somewhat maladaptive, way of trying to get what you need by providing it to other people. It’s possible that the counterpoint to support, interest, and attention is reciprocal support, interest, and attention. It’s possible when someone pays attention to you, it’s not because you are uniquely fascinating, but that they make a unique practice of being fascinated with others. That’s pretty interesting, actually. Maybe you should ask them about that.