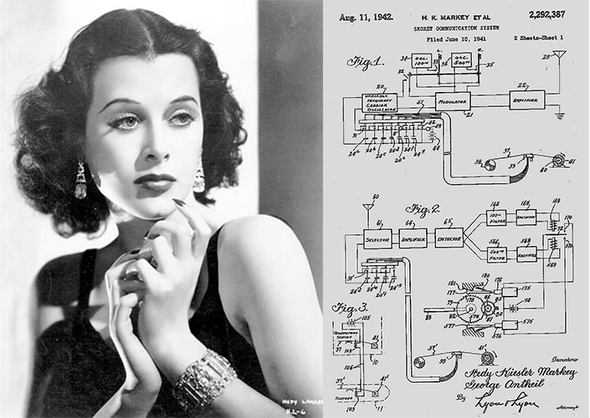 If you’ve heard of Hedy Lamarr, it’s probably in connection to her dramatic and scandal-laden career as a Hollywood film actress of the 1930s and ‘40s. Pigeonholed early for her involvement at the age of 19 in an “experimental” film, Ecstasy — the first non-pornographic film to portray an on-screen female orgasm — Lamarr went on to lead a life that was, in all respects, the embodiment of old Hollywood glamour and scandal. Her much-publicized feats include more than two dozen film roles, an endless supply of frankly honest and devastatingly arch press quotes, and no less than six marriages. Get it, Lamarr.

But what you possibly haven’t heard — what seems to be a largely unrecognized aspect of this astonishingly multifaceted woman — is that she is effectively one of the founding mothers of modern technology. Disillusioned by her life in Hollywood, which castigated Lamarr for the sexpot image that it was nonetheless endlessly commoditizing, in 1941 — 75 years ago today — the actress patented a “secret communication system” in collaboration with modernist composer George Antheil. Using ideas gleaned during her first marriage at the age of 18 to Friedrich Mandl, a powerful Austrian arms merchant, Lamarr developed “frequency hopping” technology which used piano keys as a form of message encryption for torpedo guidance systems during World War II. These techniques were adopted militarily during the Cuban Missile Crisis and would eventually go on to be the basis for modern wireless communications, including Wifi and Bluetooth. While the wartime efforts of figures like mathematician Alan Turing are widely recognized to be the foundations of modern computing, Lamarr’s achievements seem largely confined to an obscure chapter of history.