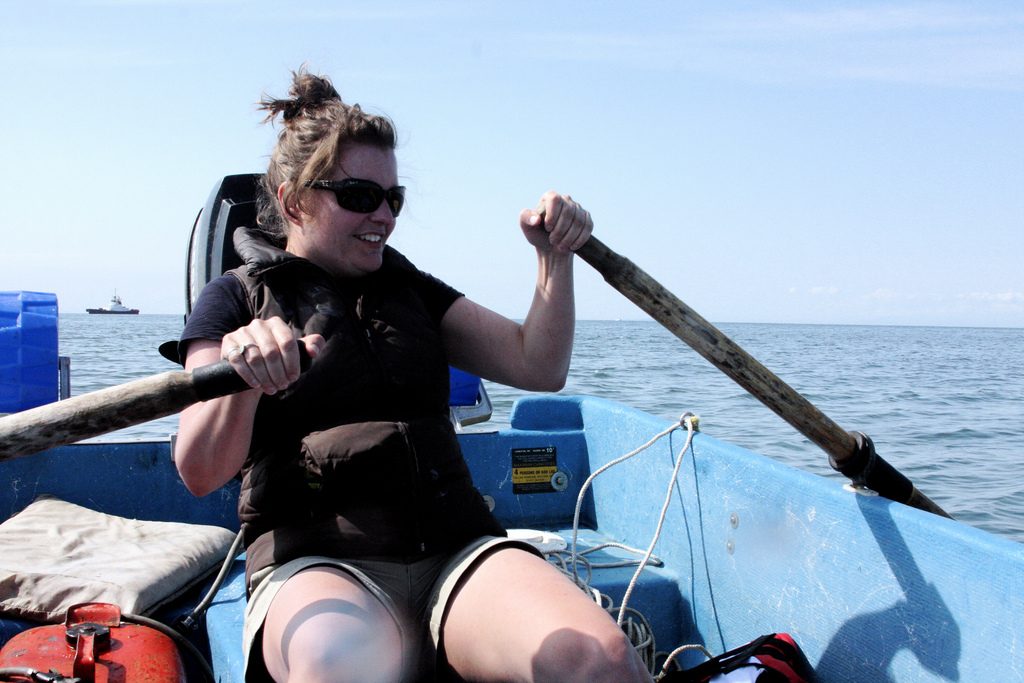 We went out in the dinghy the day after I arrived, Mike and I, and his sister Megan. There was a small outboard motor rigged up, and Mike was clowning around at the tiller. We had beers in a cooler and the light was rippling spastically off the water. There was a spell of easy camaraderie on this boat ride to nowhere, when a sudden shift in the social tide brought Mike and Megan’s family banter to the surface, excluding me. The odd one out in a three-man dinghy – and then the motor cut off abruptly. Megan took to the oars, and I snapped her picture. When we returned to shore, we disembarked into the calf-high surf to pull the boat up. Megan and Mike exchanged a glance and moved aft, suggesting I take point on the rope at the front. I felt myself becoming the butt of a joke, but what could I do?
“Here we go,” said Mike, “On one, two…” Megan joined in for “Three!”—further proof, in my mind, of their conspiracy. My back to them, I could nonetheless clearly picture them raising their hands and standing back to watch me struggle to pull the weight myself. It was the only explanation, really, for how surprised they looked, still standing in the surf, when I hauled the boat twenty feet up the beach on my own.
“Is that good?” Mike was visibly baffled, and Megan impressed. I’d blown his joke and inadvertently earned respect from his sister. Still dumb enough to like him, I cut him a break, refusing to acknowledge their attempt to humiliate me. Looked at him wide-eyed, and ostensibly trusting. “Is that far enough?”

“Yeah…that’s fine.” That pang of conscience serves you right, I thought. There is nothing so grim as the fate of a man who has failed to recognize when a woman is taking it easy on him. What kind of girls do you know, if you thought I was a princess? What does it say about you, that the weakness you imagined is what you liked about me? I have spent the last year running on my own steam; I have lifted myself out of chaos. If you think a rowboat is going to slow me down, you have another thing coming.