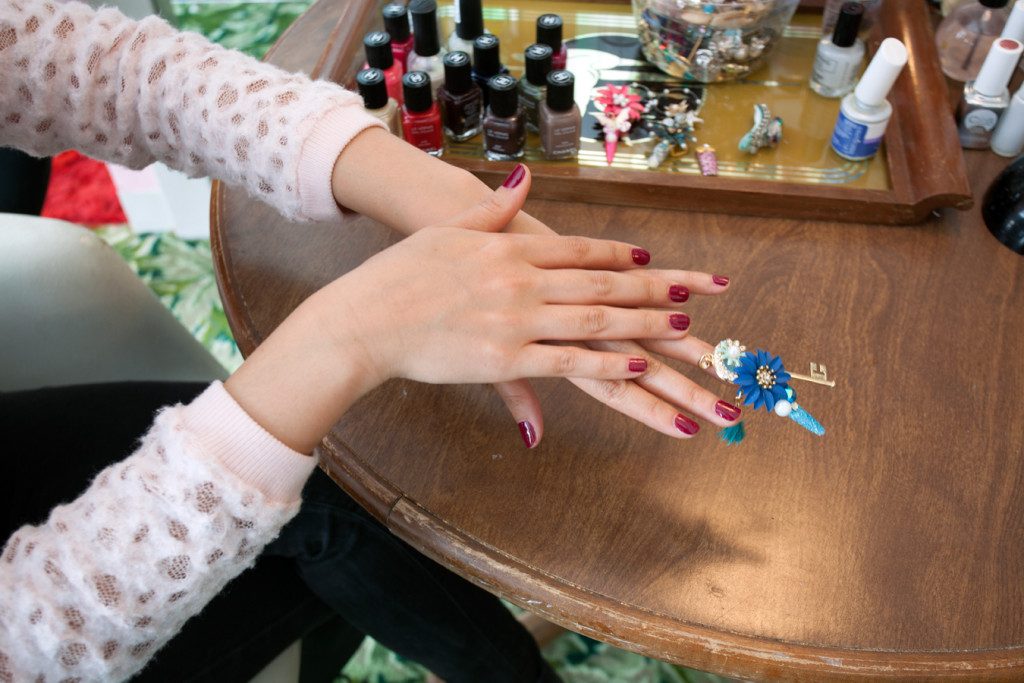 Image courtesy of the MOCAD

In some respects, the Mike Kelley Mobile Homestead (2010), permanently located at the Museum of Contemporary Art Detroit, is the perfect staging context for Carlos Rolón’s, known by the moniker Dzine, Vintage Voyages and Atomic Memories (2016). A site-specific reprisal of a theme that Rolón has worked on in previous installations, here, the artist’s personal childhood experience of his mother’s work-from-home business as a nail technician is on view. Roving under the name Imperial Nail Salon, Rolón has created nail art-related exhibitions and performances at Salon 94 and the New Museum in New York, as well as setting up shop at the Standard Hotel during Art Basel Miami Beach in 2012. Vintage Voyages takes up the same basic elements of Rolón’s previous iterations, but with a new twist: just like his mother’s nail salon, the installation is created within a domestic space, as the Mobile Homestead is a replica of artist Mike Kelley’s childhood home in the Metro Detroit suburbs.

There is an interesting chemistry in having the physical invocation of the childhood memories of two very different Midwestern artists collide in the same space. In some ways, the installation of Rolón’s exhibit inside a house-structure feels almost too on-the-nose; the texturally rich and colorful interior decor draws participants back into the aesthetics of the 1970’s; he has also succeeded in making a house look like a house, which is different than making a gallery look like a house, or manifesting his parents’ living room within a high-end hotel lobby. There is some culture clash as well—the trappings of Kelley’s upbringing scream of white suburbia, while Rolón’s work unceasingly reflects the influence of his Puerto Rican heritage and a more urbanized upbringing. But in the context of Detroit, it is some of the most powerful work the Mobile Homestead has done to recognize—and perhaps appeal to—the true racial demographics of a city still largely occupied by people of color, but being radically developed for the benefit of a growing influx of younger white residents.