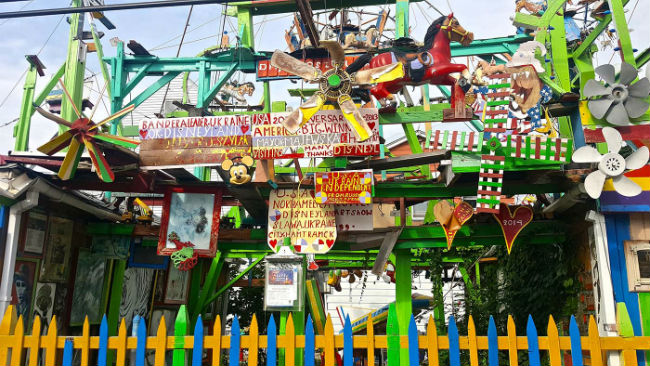 From the sidewalk, there is little to suggest that the house at 12087 Klinger Street in Hamtramck is that out of the ordinary. Yes, the front porch of the duplex displays a couple of homemade woodcut figurines, roughly person-sized, with one seemingly dressed as the Statue of Liberty. The chain-link gates leading into the backyard are elaborately woven with brightly-colored plastic stripping, and one features an arcade-like arch with two rearing plastic blow-mold bouncy horses. Yet even taking that into consideration, it is not wildly outside the scope of decorative kitsch that might adorn any given house in the diverse and expressive municipality of Hamtramck, which over the last century has played host to wave after wave of Metro Detroit immigrant populations—once German, Polish, and Ukrainian, and of late, largely Bangladeshi and Yemeni.

Ukraine native Dmytro Szylak came to Hamtramck by way of a displaced persons internment camp and worked for Chrysler from 1956 to 1986. It wasn’t until after his retirement that he began, innocuously, to create the sprawling outsider art installation that has come to be known as Hamtramck Disneyland.

If one approaches Szylak’s home by way of the back alley that divides Klinger St. from Sobieski, they will be afforded a very different view of the property. On scaffolding mounted tenuously between two garages, the colorful chaos of Hamtramck Disneyland reaches improbably skyward. The first impression is one of a collapsed roller coaster, with wooden infrastructure in nonsensical arches and twists, heavily adorned with carefully selected pieces of salvage: fans and propellers, hand-painted signs, strings of lights, and an entire herd of blow-mold horses.