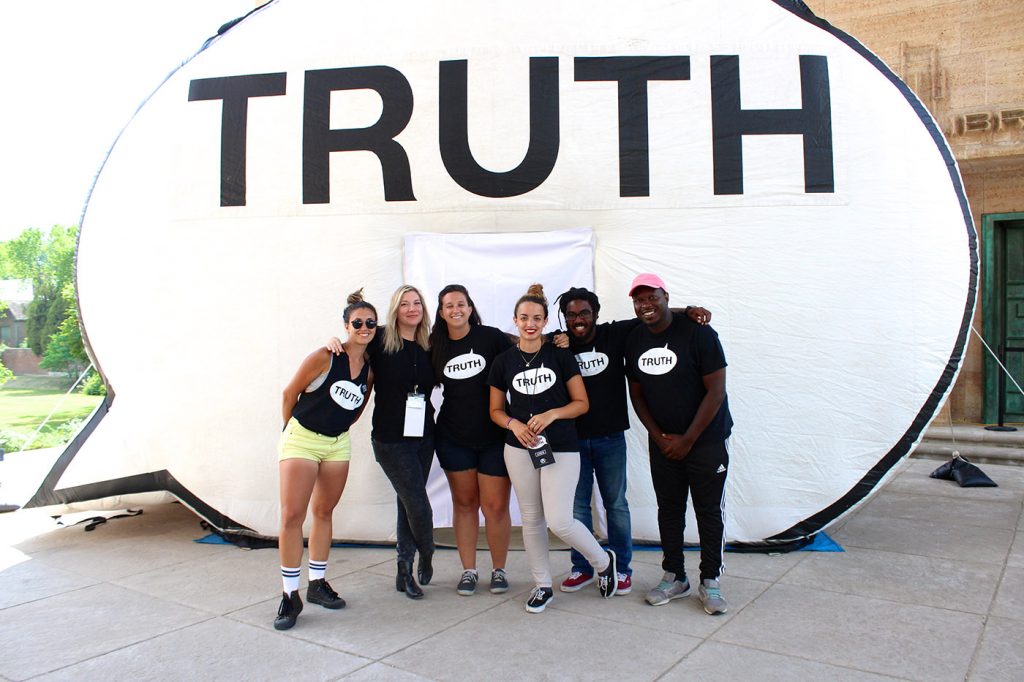 Since July 31, the Detroit metro area has been visited by “The Truth Booth,” an ongoing interactive project conceived by Cause Collective, and brought for a two-week intensive visit to Michigan by a $60,000 Knight Arts Challenge grant awarded to the Cranbrook Art Museum. Laura Mott, curator of contemporary art and design at Cranbrook, worked previously with artist Hank Willis Thomas and Cause Collective’s Ryan Alexiev to help get the project on its feet, nearly eight years ago.

“We had done a show with Ryan at Mission 17, where I was working,” Mott said. “I met Hank [Willis Thomas] through that. And they were working together already in Cause Collective–‘The Truth Booth’ was an idea they had that was sort of on paper, and I wrote a grant to get funding to build it. And then I moved to Sweden! So I essentially sourced them some seed money to build the prototype.”

Fast-forward eight years, and Mott is finally getting to see the vision she helped seed in action. “The Knight [Arts Challenge] is interesting,” she said. “It’s a challenge in terms of the money, but it’s also a challenge in terms of what’s an interesting public project for this context.” For Mott, the timing and the location of “The Truth Booth” could not be more exciting. “To me, ‘The Truth Booth’ in this year in the city of Detroit, when there’s so much conversation and very little opportunity for individuals to be heard, it seems kind of perfect. So it’s on its own correct karmic timeline, in terms of coming together as a project.”