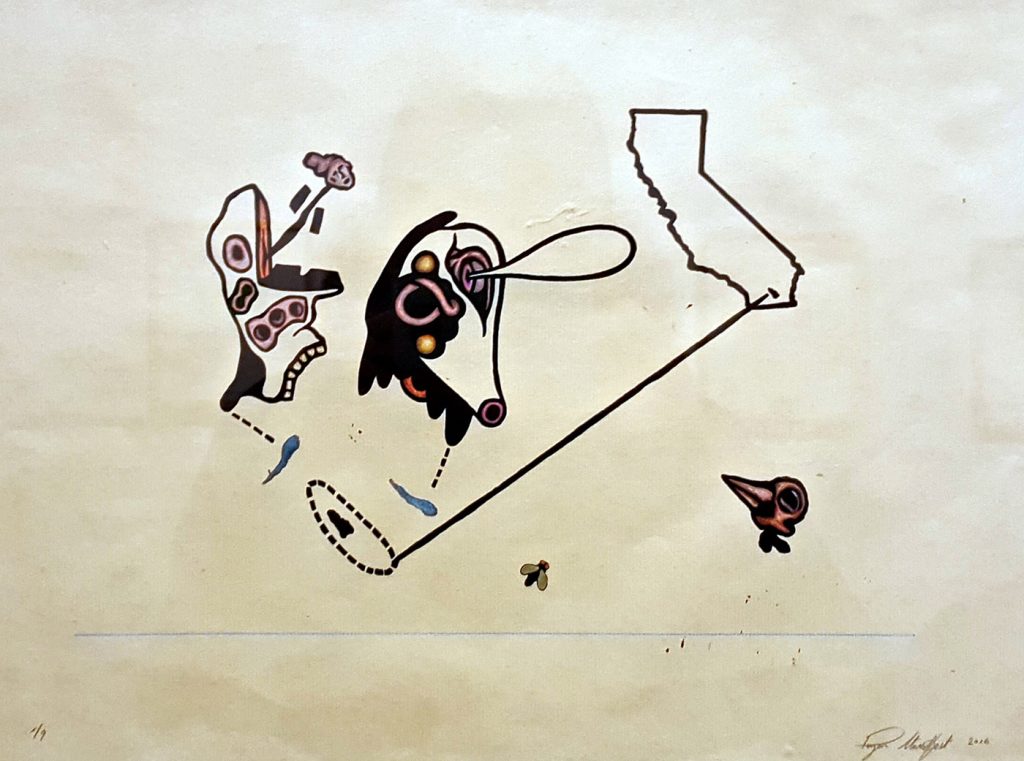 HAMTRAMCK, Mich. — “As a child, I had a devout interest in my grandfather’s handmade fly traps that adorned his backyard garden, dangling from tree branches and fence posts,” reads the statement accompanying Ryan Standfest’s solo exhibition of prints at Hatch Art, Random Negotiations Toward an Unreasonable Happiness.

I was mesmerized by these simple contraptions as their glass jars, without fail, would become overpopulated with a teeming mess of flies … After I failed to comprehend how the flies could not exit the trap, he explained: a small area of the lid was raised slightly to allow the flies to enter. But within the underside of the lid, both the raised area and the rim of the opening, was painted brown, and thus the compound eyes of the fly could not clearly perceive a way out, resulting in its own entrapment … I often reflect on the absurdity of the situation — a collision between intent and circumstance, a mechanism constructed to rely upon misperception, a little death machine put to work in the clear light of day.

This statement eloquently draws together a number of aesthetic and symbolic components of Standfest’s work: contraptions, instructions, maudlin memories, grotesque outcomes, and dark, dark humor. “Post-Truth Feed (for Daniil Kharms)” features a series of neat, rubber-stamped jars — an approximation of his grandfather’s death traps — annotated with handwritten snippets of a 1930 poem by Soviet-era absurdist writer Daniil Kharms, “Notnow,” which feels all too relevant in our current post-truth climate:

This is not That.

This is not This.

What’s left is either this, or not this.

It’s all either that, or not that.

What’s not that and not this, that is not this and not that.

What is this and also that, that is itself Itself.