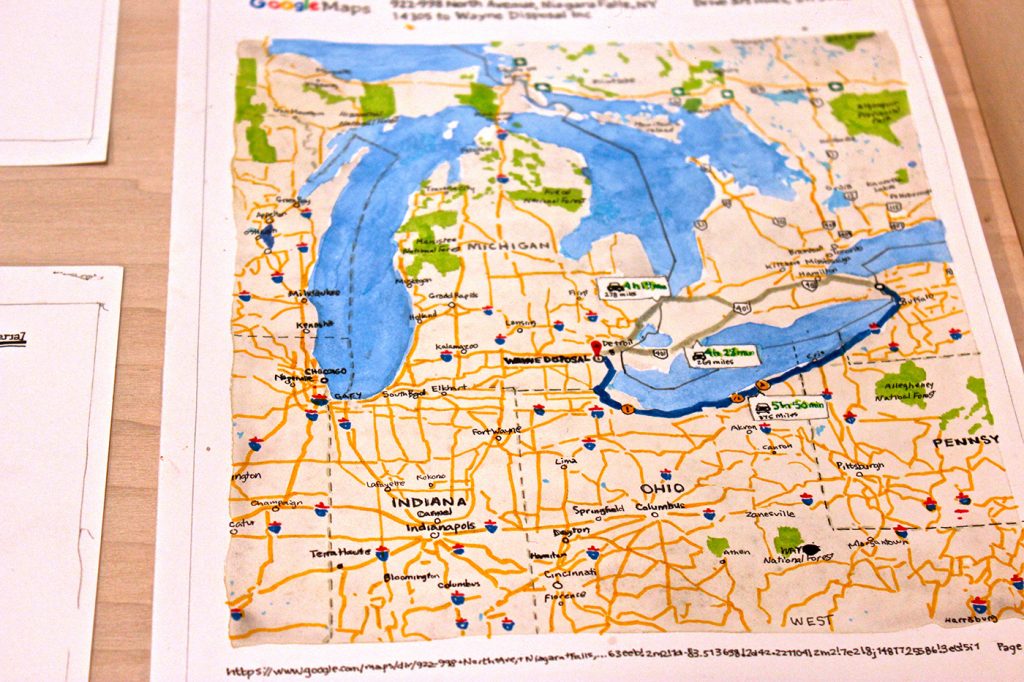 ANN ARBOR, Mich. — How’s this sound for a fun getaway: visiting toxic landscapes and radioactive hot spots around our great nation? Artist Joan Linder has made it her business over the last three and a half years to explore and document some of the industrial waste disposal areas of the Great Lakes region, surveying and cataloguing her observations while sitting in her car at a safe distance, as indicated by the dosimeter that is her constant companion.

“I’m kind of interested in just a really simple documenting, bearing witness in a really slow way,” said Linder, in a process video created by Donald Harrison on behalf of the University of Michigan’s Institute for the Humanities, where Linder’s materials from the last year and a half are currently on display in Atomic Highways and Byways.

Linder’s project is a series of 135 drawings, to date, collectively titled Toxic Archives 2013–present. Materials include long scrolls that feature hand-drawn, panoramic views of affected areas in Buffalo, Niagara Falls, and, in the project’s most recent iteration, the US Ecology landfill at Willow Run Airport in Bellville, Michigan. Linder was initially inspired by her interest in the Love Canal disaster in Niagara Falls, wherein an entire neighborhood development was built on toxic ground, impacting the health of hundreds of residents. Outcry about the situation peaked in the late 1970s, resulting in a Superfund cleanup that concluded with the neighborhood’s demolition in 2004.