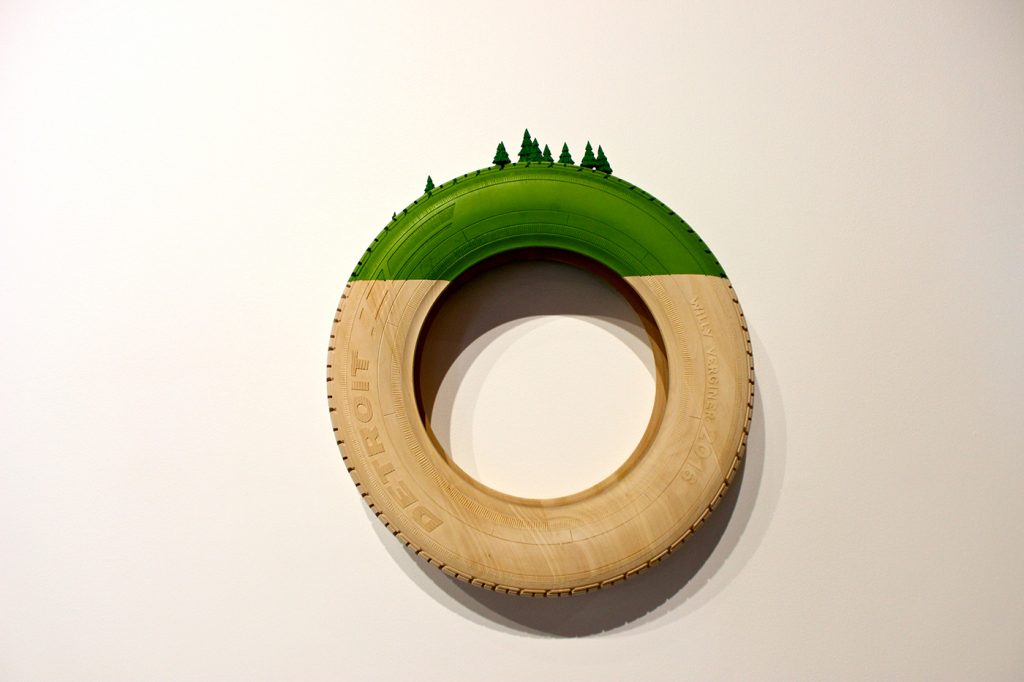 DETROIT — It is fitting that After Industry, a three-person show at Wasserman Projects concerned with the relationship between man and nature, came together, in the words of gallery director Alison Wong, “organically.” Yet the synthesis of three masters of divergent media — Italian sculptor Willy Verginer, Norwegian painter Christer Karlstad, and Michigan-based photographer Jason DeMarte — is a credit to both Wong’s gift for grouping artists in uncanny combinations and gallery owner and steel company executive Gary Wasserman’s passion for discovering art during his travels.

Verginer’s astonishing wood carvings were the jumping-off point for this exhibition. The Italian artist comes from Ortisei in South Tyrol, Italy — a small village that’s known internationally for its centuries-old trade of religious wood carvings. This art has been passed down through families and generations, and Verginer represents a new school, diverging from the traditional religious motifs to apply the trade to fine art sculpture. Yet the roots of the work are clear: there’s something both narrative and didactic about his carved tableaux, to say nothing of their painstaking detail and execution.

Wasserman’s main gallery is dominated by a massive installation by Verginer which features a group of painted oil drums (the only element of his works not carved from lindenwood or applewood). The drums, which represent an industrial mechanism, are being addressed at one end by a businessman type, who perches pantless atop a tower of drums, his hands raised in the type of gang signs particular to the stock market trading floor. His opponent, gumming up the roll of barrels, is a mule that’s being simultaneously ridden and consumed by two children. The businessman and the mule are recurring figures in Verginer’s work, representing the clash between industry and tradition. Though Verginer has moved away from the traditional subject matter of his cultural heritage, his compositions nonetheless have a Biblical feel, in the sense of teaching a lesson by telling a story; there’s no escaping the mythological, Romulus-and-Remus vibe of the two children and the mule.