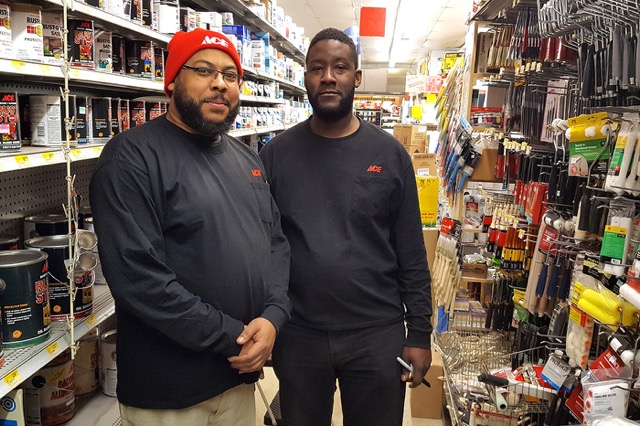 If you know me, you know I love the hardware store, and guys who work at hardware stores. Bless you all, you are so useful, and have helped me bumble through 1 million home improvement projects for which I am patently unqualified (but better every day!) I got the chance to talk to the fellas over at Brooks Hardware, one of my favorite Detroit hardware stores. With the recent announcement that Busy Bee is closing, it’s more important than ever to give these places the love they deserve!

Ray Formosa grew up in Corktown. In high school, he starting working as a stock boy at Brooks Lumber & Hardware, the only place he’s ever worked. Today he co-owns it.

But his life and time in and around the hardware store is just a blip in its long history—perhaps the longest among all Detroit businesses.

Since 1896, Brooks Lumber & Hardware has sat on the same piece of land in Corktown, witnessing in its time the building of the John Lodge and I-75 freeways, which flank its property to the north and the east, and the entire lifespan of the original Tiger Stadium, which sat just across Trumbull Street. It was founded and owned for generations by the Brooks family, with ownership eventually passing to a cohort of longtime employees, including Formosa.

“That we know of, we are the oldest retail business in the city at the same location,” says Formosa, who began his tenure at Brooks in 1978.

Brooks is like a concentrated, eclectic Home Depot. The shop floor is a sprawling warren of aisles with thousands of items instrumental to building and maintenance, from changing a light bulb to historic rehabilitation.

With such a longstanding history in the city, Brooks has been party to the making and maintenance of many of Detroit’s most iconic buildings.