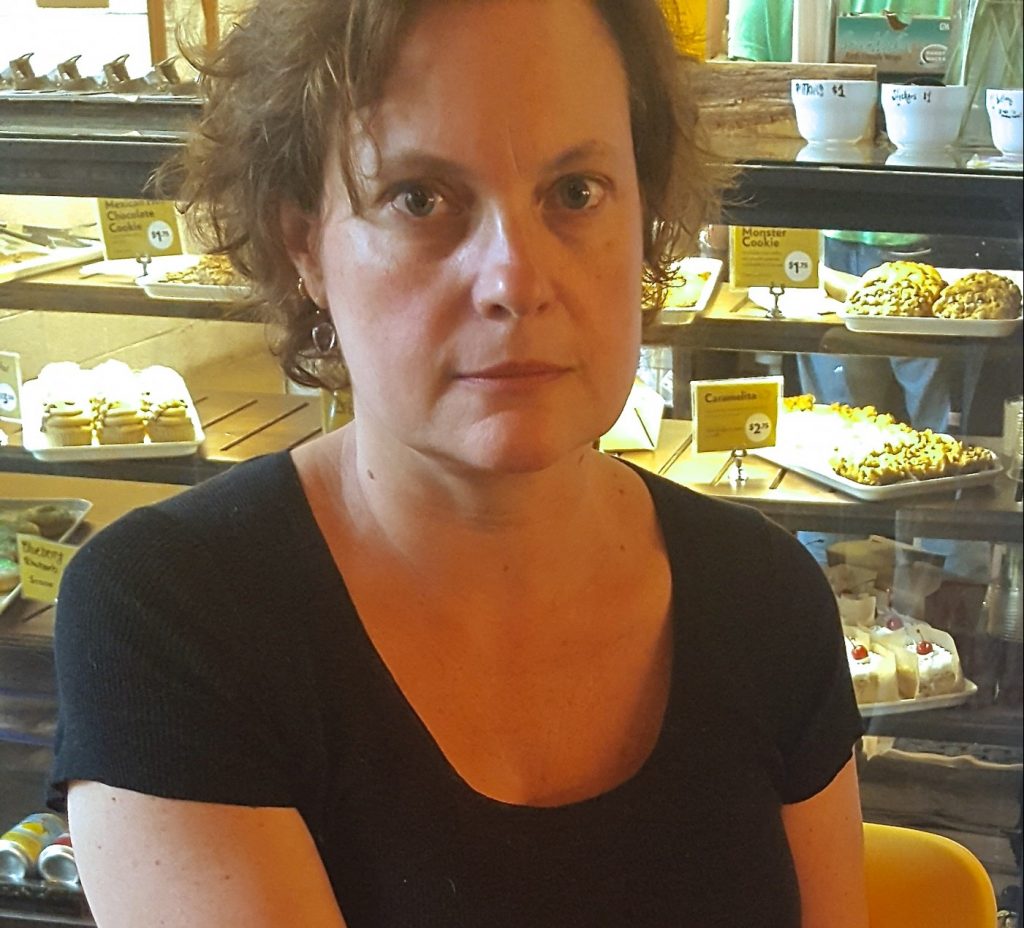 Meagan Shein showed up for this BWTA with a conversational agenda! I like that in a woman. This amounted to 10 minutes of her talking a blue streak while I fueled up on my Power Up Bowl, and then it was game on. Meagan’s work takes shape in figurative or abstracted nature forms, often fashioned from paper and beeswax, but in conversation with her, it becomes clear that she is tackling deep issues regarding entanglement, family history, and philosophical conflict. This is a great case-in-point about why I like to do Breakfast with the Artist, rather than dive right into studio visits, or begin from a place of focus on the work – as artists know, the work is coming from somewhere, and it’s much easier to extrapolate ideas once you’ve connected with someone, then it is to try to reverse-engineer personality through highly personal objects. Save me some time, and don’t be shy about hitting the “Ask Me to Breakfast” button!

Meagan is doing the life work of an artist, that is to say, struggling through the conflict between making work that feels authentic, and taking it to market. We talked a lot about art as activism, which for her has deeply personal underpinnings, since she comes from a family history full of activism as activism. Her grandfather, Saul Wellman, was the leader of the Communist Party in Detroit in the 1950s, and part of the “Michigan Six” (or “Detroit Six”) First Amendment Supreme Court case. Her grandmother was a labor union organizer, and Meagan grew up in a commune environment, steeped in familial values that dictate a need to directly intervene in politics of the day, in defense of what you think is right.

“I was supposed to be a lawyer fighting for abortion rights,” said Meagan. “My family is great, but when I told them I was going to pursue art, they were like, ‘What good is that going to do?'”

I mean, great question, right? Meagan’s brother is a climate change activist, and my immediate response, in defense of a woman in the relatable position of trying to reconcile her own desires with the expectations being put upon her is: What good is he doing? Didn’t a big ice shelf just crack off into the ocean? Aren’t we all going to die? Art is a vehicle for critical thinking and free expression. That is as much a generative value as labor organizing. Political systems fail precisely because they are predicated on controlling behaviors, and art exists as a counterpoint to that impulse. Ultimately, Meagan’s grandfather broke with the Communist Party, renouncing those values, which “really pissed people off,” and cost her mother’s family what remaining community they had. Activism can be just as cultish as religion, and similarly has the capacity to unite people for good. But it is not the only way of making change in one’s world.

“We all make our own lives,” said Meagan. Perhaps women struggle more than men to find the balance between their individual identity and that of their families? Her grandfather had to go into hiding for several years, leaving care of the family resting squarely on her grandmother’s shoulders. The pretense of using the high ideals of art or activism to abandon one’s obligation to their family is a classic male gambit, and one that is forgiven in retrospect by the making of great works. Meagan seems to have no rancor toward her grandfather – he is clearly a canonized figure in her family – but I humbly submit that politics begin at home, and if you make children, you should take care of them. I don’t have any children, and that is a choice I weigh constantly against my desire to pursue other priorities. We talk about women wanting to “have it all,” but with great family comes great obligation, and men are still excused from these obligations as a matter of course, while women are villified for failing to meet them.

Artists, for better or worse, hear their own call. You have to listen to it, and you have to trust what you hear. Women in particular are bombarded with ideas and expectations about who they need to be, and many of them take on the role of caring for others without first taking the time to establish themselves and identify their own needs. Anyone who decides to “selfishly” carve out the space for herself amidst the constant demands for her time, her attention, her smile is, in my opinion, committing an everyday act of resistance.