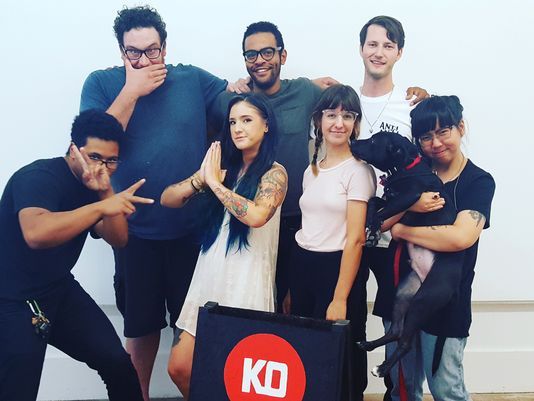 It’s hard to sit down with members of Hamtramck art collective Heavenly Dogs without feeling as if you’ve wandered onto the set of a hip-to-death sitcom about a wacky crew of creative millennials.

On hand this day at KO Gallery, their recently opened and collectively operated gallery space that shares a storefront on Jos. Campau Avenue with Detroit Arcade Club, are seven of the collective’s 20 members, plus their canine mascot, Tank. You’re not likely to find a more affable group of young creatives, or, as they describe themselves on their website: “a bunch of no-good, table-flipping, wood-pushing, trash-talking naysaying, void-worshiping, anti-everything do-nothings in & around Detroit.”

“Some of our members aren’t even in Michigan right now,” says Dino (DJ) Valdez, one of the collective’s founding members. “At this point, we have members in California, New Jersey, Atlanta, and Chicago, in addition to Detroit.”

Heavenly Dogs is in its fourth year. Before that, it  began unofficially as a street art crew, Over time, it evolved as members sought to bring the ethics and protocols of the graffiti world into a setting that would support their ambitions in the wider art world.