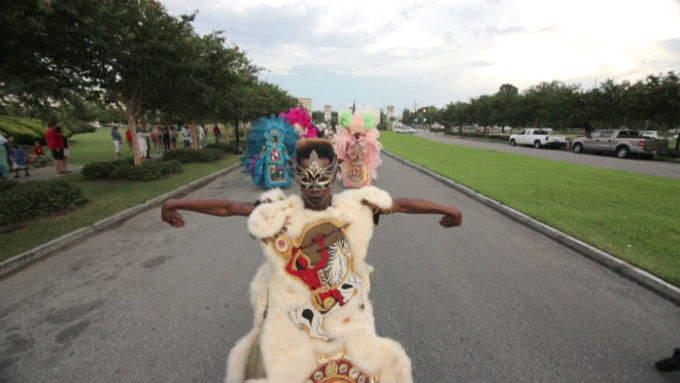 Following a three-year hiatus, this month’s much-anticipated return of DLECTRICITY—the public, free, outdoor light-based art show along the Woodward Corridor in Midtown Detroit—ups its game with the addition of New York City-based multidisciplinary artist Rashaad Newsome as artist-in-residence for the 2017 festivities. Working in conjunction with the Detroit Institute of the Arts, as well as numerous community members, from Cass Tech students and the popular Gabriel Brass Band, to individual performers and dance troupes, Newsome will be staging a series of happenings during DLECTRICITY weekend that are not to be missed.

The major event is the Detroit iteration of Newsome’s King of Arms, his iconic mass processional performance, specially commissioned for the occasion, which will kick off DLECTRICITY on Friday, September 22nd at 7pm in the DIA’s Great Hall. King of Arms launches with the premiere of a large-scale, site-specific video projection, after which, the procession will take to the streets.

Throughout the summer, Newsome has been hard at work casting local performers and staging rehearsals for Shade Composition, an ongoing, iterative artwork, the performance of which will conclude the DLECTRICITY festival at 8pm on September 23rd at the Detroit Film Theatre. Newsome acts as conductor and vocal choreographer, and will lead an ensemble of locally cast self-identifying Black female performers, whose voices and gestures are synthesized to form a live and improvisational orchestral audio/video collage, mixed using hacked video game controllers.

As DLECTRICITY draws near, Newsome took a moment out of his busy preparations to speak with CultureSource about his experience working in Detroit, and what visitors to DLECTRICITY can expect to see out of his studio.