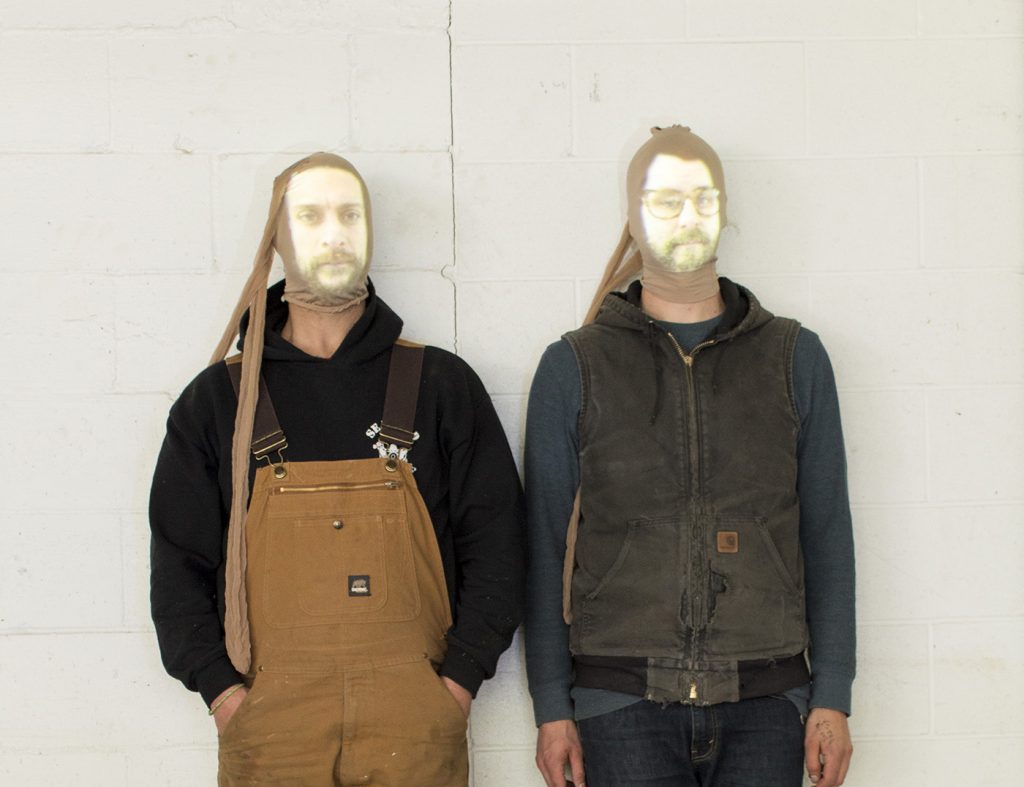 Friends and artists Alex Gartelmann and Jonas Sebura, who create collaborative works under the name Sebura&Gartelmann, express a mutual interest in “vernacular architecture”—for example, in their 2014 interactive sculpture, Church, which combined the architectural language of DIY skate parks with that of secular spaces. Understanding this merging of high art and vernacular architecture to be an ongoing point of interest for the pair, one can easily interpret their newest presentation of works, Two Men Walk Into a Bar—which opens at Holding House in Detroit on October 13, 2017—as an examination of the venerated institution of male bonding and communication through the vernacular social structure of the joke.

Most men engage in bonding rituals of some sort—socially, professionally, sexually, or athletically—but for these two men who work in close collaboration, it stands to reason than an examination of male communication and cooperative behavior is paramount to the success of their art practice (and has, in fact, become a perennial subject of it). Peg Wall (2017) is a four-channel video that documents the pair’s efforts to simultaneously scale both sides of a homemade climbing wall, with nothing for leverage besides three weight-bearing pegs, the movements of which they must coordinate—under considerable physical duress—to enable them to summit the wall together. The exertion on the part of the participants is foreseeable, as well as their interdependence, but the vulnerability of the situation only really becomes clear as they find themselves high up the wall, and well exhausted.

“I’m in a terrible position,” Gartelmann observes, at one point. That may be a difficult sentiment for most men to express, even to a close friend. A similar work, Beam (2017), finds the guys acting as counterweights to each other on an adult-sized teeter-totter built at the height of an A-frame ladder. Sebura&Gartelmann effectively convey emotional dynamics by creating situations rooted in physical vulnerability and mutual dependence, requiring strong communication and shared responsibility for outcomes. About halfway through Beam, the pair lose their equilibrium—laughing at the precariousness of the situation, Gartelmann has ventured further out on his end of the beam, and the distribution of weight brings him delicately to the ground, but as he loses his balance and falls away from the structure, Sebura has his footing unexpectedly drop away from high in the air. The second half of the video documents Gartelmann tending to his injured friend, who eventually makes it back on his feet, the two once more dissolving into laughter.

Laughter is a common form of exchange between the two, as they engage in slapstick humor, with Stooges-like pratfalls and Jackass-type fraternal stunting—even going so far as to perform goofy bowl cuts on each other, in Stooges Hair Cut (2016). This idea of social grooming is examined in detail in Hand Wash (2016) [not included in the show], where the pair mutually wash each other’s oil-encrusted hands through the divide of a two-sided utility sink. Sebura&Gartelmann cannily stage their exercises in intimacy within the trappings of conventional masculinity—plywood constructions, safety goggles, skateboards, grease-stained fingers—which serves to underscore the extremely narrow constraints placed on male interaction in friendships which rarely include touch, trust, close communication or real partnership.

In addition to their video works, Two Men Walk Into a Bar presents sculptures that touch on various comedic forms—including bathroom humor, alluded to by One-Seater, which makes a kind of communal toilet constructed from building supplies cast in brass, steel, and iron. The work manages to literally recast the idea of shitting into a bucket in terms of fine art and formal composition. Another work, Foogazi (2016), employs the bait-and-switch, as well as the most hallowed form of “dad humor,” the pun. A roughly constructed mannequin wears a dirty homemade t-shirt, upon which the original band name, “Foo Fighters” has been messily adjusted to read “Foo^Gazi”—an awkward slight-of-hand that would make even the most hardened punster cringe. The aesthetics of the piece certainly align more closely with the DIY ethos championed by genre-defining hardcore band Fugazi than those embodied by Dave Grohl’s post-grunge hit machine, Foo Fighters, although Grohl was inspired by Fugazi, going so far as to write a letter to punk icon Ian MacKaye during his teenage years.

In their ongoing work, Sebura&Gartelmann manage the uncommon feat of capturing male vulnerability, intimacy, and humor without sacrificing any of the aesthetics of conventional male identity. In so doing, they offer a refreshing alternative to both the grim lone-wolf male archetype, and that of the ultra-sensitive male artist, refashioning the accessories of masculinity to fit their playful intentions. These are jokes at no one’s expense, and they invite the viewer to laugh in the face of the contrived and gendered constraints that society constantly imposes upon all of us.

This is a commissioned catalog essay for Holding House, all rights reserved, and shared with their permission. Image courtesy of the artists and Holding House. Two Men Walk Into A Bar opens at Holding House on Friday, October 13, and runs through November 11.