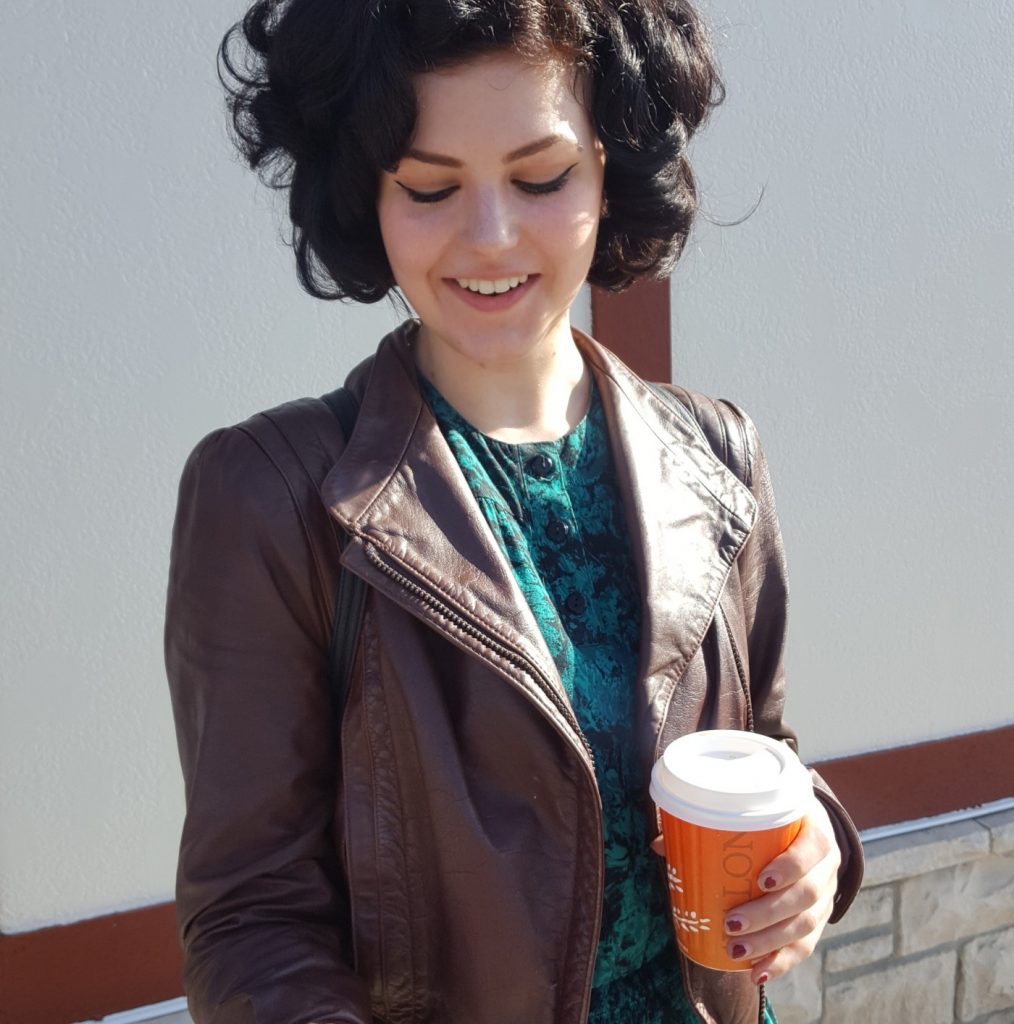 Walking around the block to catch a little fresh air, after baking in Avalon’s sun-drenched window seat, artist Susan Okla spots an extension ladder leaning against the facade of Mario’s Italian restaurant, and it gives her pause. One does not need to speculate as to Okla’s internal monologue in this moment – she talks me (and perhaps herself) through the acknowledgment of a baseless fear, and her decision to lean into it, walking boldly under the ladder.

Literally two steps later, she spots a penny, and bends to pick it up without a second thought. “Heads up!” she says, holding it out to me. “Lucky!” I point out that she has subverted one superstition, only to fall instantly prey to another, and we both laugh.

This climate of contradictory impulses is a charming metaphor for Okla’s position in the world at the moment, trying to come into her own as an artist and and young woman. She is able to clearly articulate some of the social and psychological factors that tend to hem in females, in terms of their ability to self-represent, able to reject some, and still pander to others. Untitled (Rider) by Susan Okla. Image courtesy of the artist.

Currently, Okla is sorting through a visual vocabulary of densely-loaded imagery that draws inspiration from religious iconography and manuscripts, as well as her own recent experiences with psychoanalysis. The subjects of her surreal drawn and painted tableaux are almost invariably animals or nude women, some of whom bear obvious physical similarities to Okla. The aesthetics of Okla’s dreamy portraits evoke a particularly female strain of Surrelist imagery; there is a simultaneous sense of visceral, bodily horror to these scenes, even as they are, well…cute.

“My work deals with the intersection of Christian sadomasochism,” says Okla, “and the eroticism in that. The idea of divine suffering, and how it’s venerated as this admirable thing.”

There is a kind of interchangeability between her three primary subjects: dogs, horses, and women. Sometimes dogs have female heads, sometimes horses-as-centaurs, sometimes women riding horses, sometimes horses and dogs in conflict or cooperation with each other. Skinny, delicate greyhounds, emaciated women, pierced by arrows, birthing snakes, dripping wetness. Shocking lipsticky dog and horse dongs. A visual conflation of animal control devices, like muzzles and bridles, with bondage regalia. Layers of sex and suffering, girls, dogs, horses. While it is perhaps counter-intuitive to consider these non-mainstream sexual dynamics as an expression of Christian values, Okla has struck upon a niche trove of overlapping ideologies that manage to frame sadomasochism – and even more contentious practices, like bestiality – as an expression of devotion. Self Portrait as Sphinx II by Susan Okla. Image courtesy of the artist.

“It [sadomasochism] is in pretty much all religions, I think,” says Okla. “Self-sacrificing, and self-harming, essentially, as being a righteous thing.” Okla does not describe her upbringing as particularly religious, but her interpolation of religious and sexual dynamics seems to have begun naturally at an early age. “I had a crush on Jesus, when I was little,” she confesses. “I think that fits nicely into where I’m going with my Senior Year independent study.”

Also on the horizon for Okla is a digest-style collaboration with Rotland Press. Though Okla’s painterly aesthetics are quite different from the restrained, immaculate relief work of Rotlands Ed-in-Chief (and one of Okla’s professors at CCS) Ryan Standfest, their work shares a common interest in the juxtaposition of the gross and the funny, terse philosophy poured into drippy, ambiguous vessels. Uncomfortable content in alluring packages.

At a young age, Okla is already using art as a tool in pursuit of the perspective on her coping mechanisms, unpacking some of the sexual expectation that is imposed on women from quite a young age. Feminism, like superstition, is belief system that may contain internal contradictions – loving aspects of self-presentation while resenting them, wanting male attention while also rejecting it, desiring freedom as well as support – and most women engage in a lifelong struggle with the gulf between their internal and external realities. Artists of all stripes make a practice of using symbols that have built up layers of meaning within the context of society and history – when we present, for example, an image of a naked woman, we may be complicating the question of what it means, but we cannot deny that it already comes loaded with meaning and association. Deciding what one’s work means, especially when it uses aspects of one’s sexuality and physical appearance is an unsteady process, especially when a viewing audience fails to delineate between persona and person.

“For a few years, when I was younger, and starting at CCS, I really clung to this idea of sex-positivity and weaponizing my sexuality,” said Okla. “And it’s fucking fake. I’m sorry. It’s completely within a greater context – as a woman in the situation, I’m not being served, in this case. It’s icky.” While Okla continues to explore themes of power and sexual control – including and especially its reversal – she is more circumspect in how she engages with other players, realizing the perspective that comes with age.

One imagines Okla on her winding path, striding with confidence she may not always feel, picking up pennies or ducking under ladders as she sees fit, and – one hopes – reminding herself to apologize less and trust herself more. Safe journey!